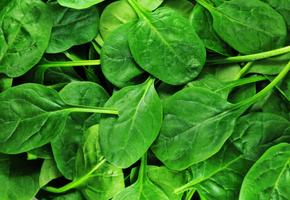 Spinach (Spinacia oleracea), is a leafy, cool-season vegetable that belongs to the Chenopodiaceae family. First cultivated in Persia over 2000 years ago, spinach was introduced to Europe in the 12th century. The plant consists of a leafy rosette formed around a crown (compressed stem). One variety, with smooth leaves, is used in the processing industry; another, with wrinkled foliage, is used solely for the fresh market. In the last few years, it has become very popular to eat young spinach leaves served in mesclun.

First sown in early spring, the traditional spinach requires only 40 days to mature and will produce several crops if sowing is staggered. Spinach grown for mesclun is harvested after 21 days of growth. The crop is usually harvested mechanically. Spinach is susceptible to virus diseases, mildew and attacks by burrowing insects. It is rich in iron and contains vitamins A and C. Traditionally used in salads, spinach is now used increasingly in various food products (eg, purées). In Canada only a few hundred hectares are devoted to commercial production; however, spinach is very popular in home gardens.