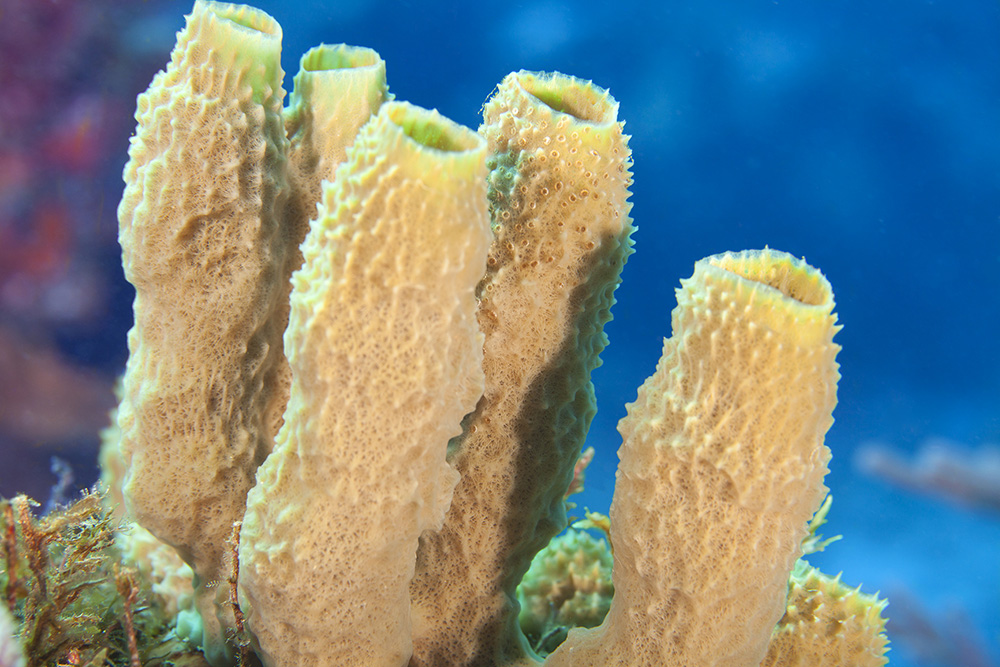 Sponge (Porifera), phylum of bottom-dwelling, attached, aquatic organisms which, as adults, generate vigorous water currents through their porous bodies by action of internal fields of microscopic flagella (whiplike structures). Sponges are the most primitive multicelled animals. The 5000-10,000 known species are distributed worldwide in marine and freshwater habitats (98% and 2% of species, respectively). They are common in Canadian waters, but a thorough inventory has not been made. The phylum is usually divided into 4 classes (Hexactinellida, Calcarea, Demospongiae and Sclerospongiae), according to the form and chemical nature of the skeleton. Living tissues of common, shallow-water sponges consist of loosely organized cells. Deep-sea hexactinellids (glass sponges) are syncytial, ie, lack division of living tissues into separate cells. In both types, water pulled into small surface pores and distributed through internal canals provides oxygen, food (caught by filtration), waste removal (by water leaving the larger body pores) and distribution of sperm and eggs. Sponges are important in the bath sponge industry, as boring organisms which damage oysters and limestone coastlines, as sources of bioactive compounds in the pharmaceuticals industry, and for their use in studies of cell specialization and intercommunication.