St Anns, NS, Unincorporated Place. St Anns is a small community located on the east side of the Cape Breton Highlands on St Anns Harbour, 34 km west of SYDNEY. The French established a fort and fishing base across St Anns Bay (Fort Sainte-Ann, now Englishtown) in 1629 but left after the fall of LOUISBOURG in 1758. The bay, harbour and community all take their names from this fort. The name is also applied to the rural area that includes Englishtown and other small communities around the bay. 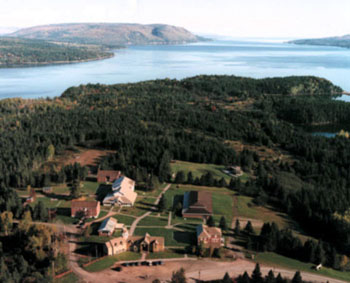 An aerial view of the Gaelic College of Celtic Arts and Crafts, nestled along the Atlantic coastline at St Anns, Nova Scotia (photo by Warren Gordon, courtesy Gaelic College).

In 1820 industrious Scots, under the leadership of Reverend Norman MCLEOD, settled here. A large shipbuilding industry was established but sharply declined when McLeod and his followers immigrated to New Zealand in the 1850s. Fishing, farming and, later, a plaster quarry supported the remaining residents.

The only one of its kind in North America, the Gaelic College of Celtic Arts and Crafts was founded at St Anns in 1938. Students may learn Gaelic language, music, dance and customs. Traditional Scottish crafts and handwoven tartans are made here. The college is home to the annual Gaelic Mod and the Festival of Cape Breton Fiddling. Also in St Anns is the Giant MacAskill Museum, where visitors will find personal effects of the famous giant Angus MCASKILL.