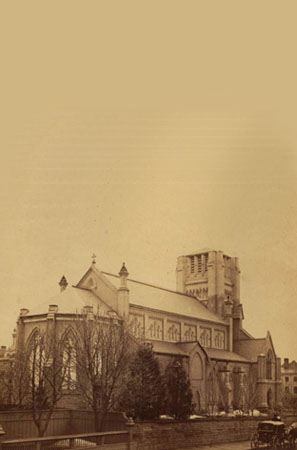 St James Cathedral without its spire for it was not completed until 1875 (public domain). 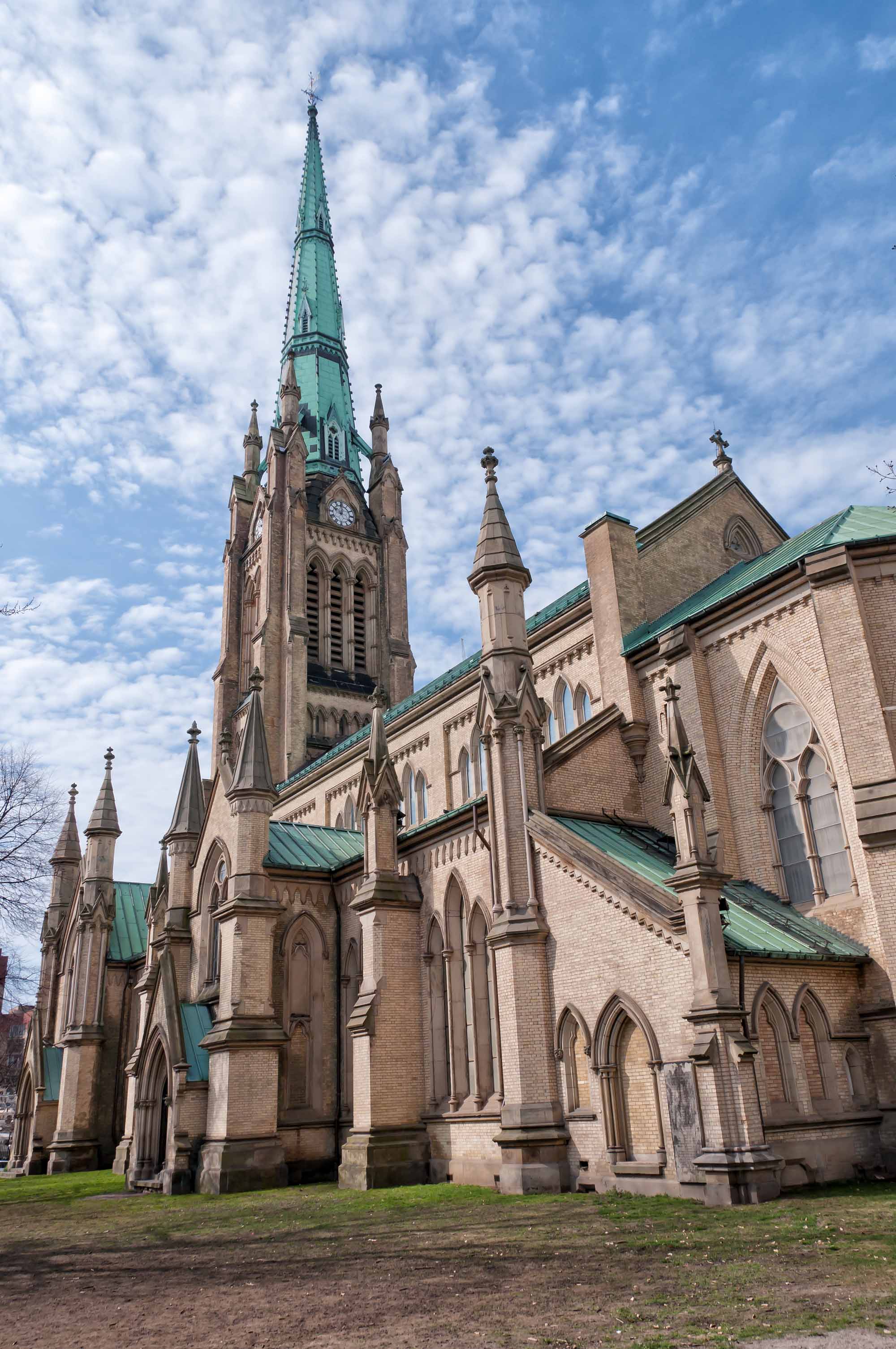 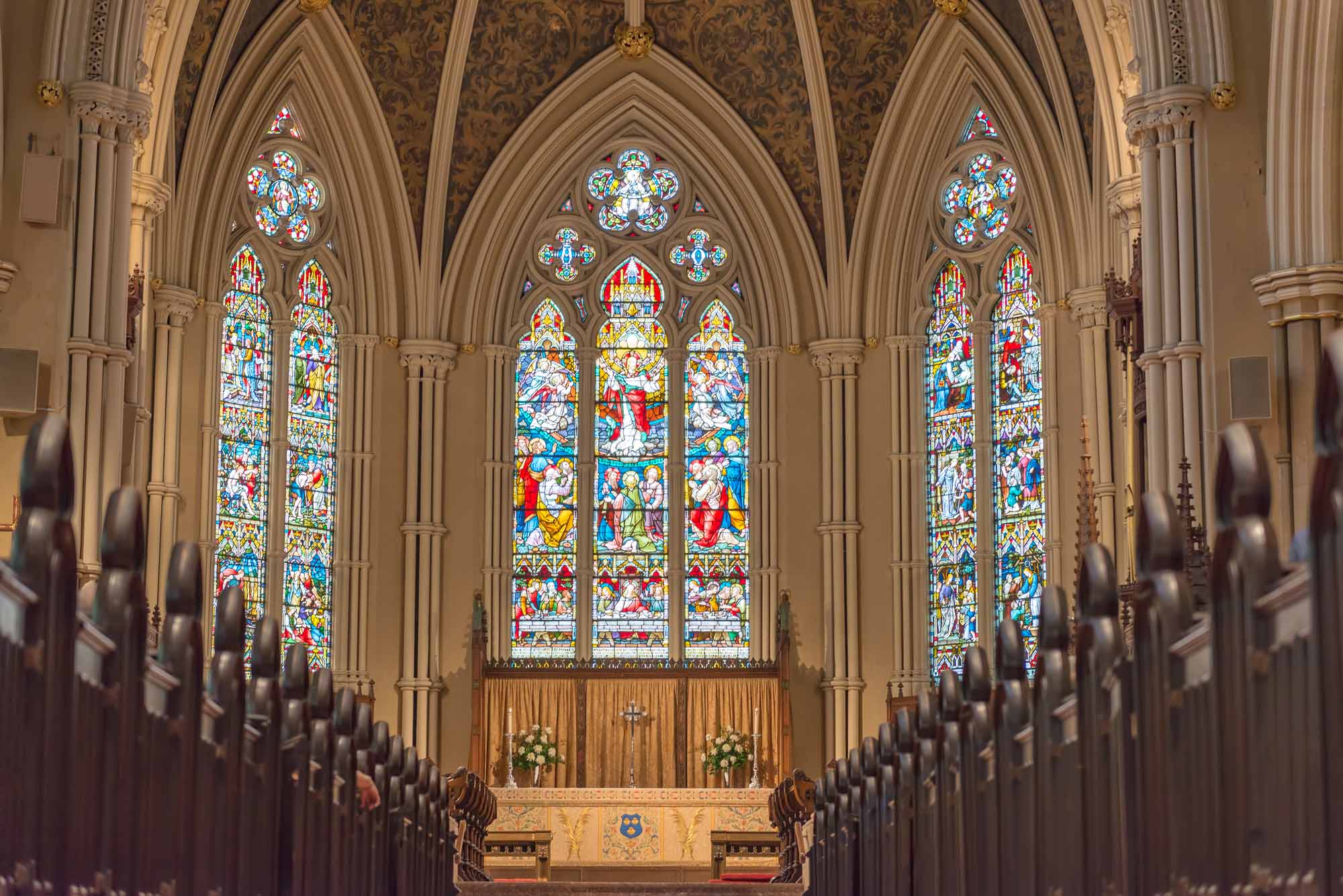 This church is the home of the oldest congregation in the city. The parish was established in 1797. It is a prime example of Gothic Revival architecture.
PreviousNext

St James' Anglican Cathedral is located at 65 Church Street (at King), Toronto, Ont. There have been four ANGLICAN churches on this site. In 1793, when Sir John Graves SIMCOE established the Town of York, the first Anglican service was held here, attended by the Queen's Rangers stationed at Fort York. The first wooden church was built in 1807 with the help of the garrison. The church was used as a hospital during the War of 1812 and was damaged and robbed by American soldiers. In 1828, it was dedicated to St James the Apostle.

In 1831, the wooden church was replaced with a larger stone structure, which opened in 1832, but burned down in 1839. St James' church was made a cathedral in 1839 when the Reverend John STRACHAN became the first Bishop of Toronto. In April 1849, St James' Cathedral was completely destroyed by fire, the second time in just ten years.

The reconstruction of the burned-out church was delayed by a shortage of funds. The insurance money was adequate to build a parish church, but was far short of the amount needed to build a cathedral. Finally the church committee decided on the more ambitious plan and opened a competition to build "a new church in the Gothic style." It was Toronto's first architectural competition. The committee decided to award the first prize to Frederic William CUMBERLAND. The decision was not popular, but Cumberland lowered the price by building the tower only to the rooftop and leaving the transepts and pinnacles to later.

Bishop Strachan was able to lay the cornerstone on 20 November 1850. The church was ready for services by 19 June 1853. In 1865, another 10.6 metres were added to the tower so that it could accommodate a new peal of bells. The tower and spire were not completed until 1873-74. In the controversy over the building of the cathedral, the green space around the church was reserved and it now provides Toronto with one of its finest downtown parks.

Cumberland's sober Gothic exterior proclaims its roots in the massive Norman architecture seen so commonly in Scottish churches and castles of the 12th and 13th centuries. The church is mainly built with Georgetown rubble stone with facings of Ohio stone, with the occasional reddish brown freestone found in the neighborhood of Queenston Heights. The columns of finely polished red granite are from the Bay of Fundy coast.

The tower--the highest church tower in Canada and second highest in North America next to New York's St Patrick's--was not completed until 1875. This tower today holds a peal of 12 bells unique in all of North America.

St James dominated the social life of Toronto in the late 19th century, with its canopied pew for the governor general at the front of the nave. Bishop Strachan is buried in the chancel. There is a stained glass window made by Tiffany & Co of New York dedicated to William Jarvis. An earlier Jarvis, Samuel, was involved in a duel on 12 July 1817, in which he killed John Ridout. The latter's gravestone was removed from the old cemetery and now sits on the wall of the south porch.