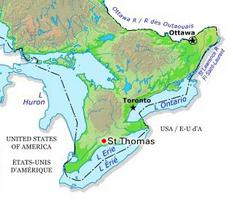 Around 1849. Talbot was superintendent of London Township from 1818 and of the town of London from 1827 (courtesy McIntosh Memorial Art Gallery, The D.B. Weldon Library, U of Western Ontario).
PreviousNext

Originally an agricultural centre, it became an important railway town at the turn of the century; by 1911 it was on 7 different rail lines. St Thomas attracted world attention in 1885 when Jumbo, a famous circus elephant, was killed after charging a Grand Trunk Railways train near the town site. Today it has an economy marked by diversified light industry.

In 1824 the first medical school in what is now Ontario was established there by Charles Duncombe and John Rolph. Nicknamed "The Garden City," it has public parks well known for their brilliant floral displays.