Steinbach, Manitoba, incorporated as a city in 1997, population 13 524 (2011c), 11 066 (2006c). The City of Steinbach is located 48 km southeast of WINNIPEG. Eighteen Kleine Gemeinde families developed a traditional MENNONITE agricultural village at the Steinbach site in 1874. They were among several thousand Mennonites who emigrated from southern Russia in the 1870s to 2 reserves established for them in Manitoba. Despite the absence of rail links, Steinbach developed as an agricultural centre and later as a commercial, industrial and administrative centre. In 1946 it was incorporated as a town. 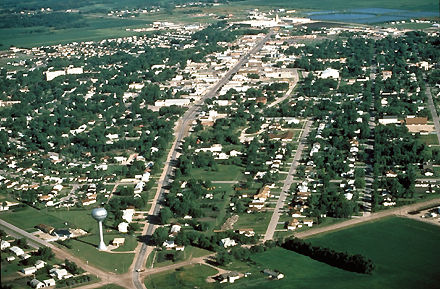 Located in a mixed-farming region, Steinbach serves a trade-area population of 50 000. Its economic activities include trucking, light manufacturing and automobile retailing. Steinbach also has a Bible college. Its heritage is celebrated during annual Pioneer Days in August and by the Mennonite Heritage Village, a reconstruction of the original settlement.