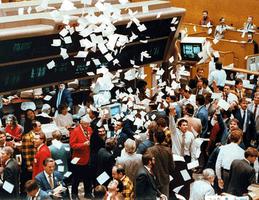 Stock and bond markets are created by associations of brokers and dealers to trade in securities. Shares represent ownership of companies and their prices depend largely on the companies' expected profits. They represent only the right, under certain conditions, to receive payments in the future. Ultimately, no security is worth more than it will fetch in the marketplace. Companies can issue new shares to raise funds. Firms called investment dealers underwrite these new issues, buying them from the companies directly and reselling them to the public through sales offices across the country and abroad. Although issues are usually marketed through groups of dealers, occasionally a single dealer may place an entire issue.

While shares represent ownership, bonds represent only a borrower's promise to make certain payments of interest and repayment of principal. Companies and governments are major issuers of bonds. Probably the best-known bonds in Canada are CANADA SAVINGS BONDS, issued by the federal government; they can be redeemed for their face value at any time. Most other bonds fluctuate daily in price because each one entitles its owner to receive a specific series of interest payments - a rise in interest rates is equivalent to a fall in bond prices, as the given series of payments will represent a higher rate of interest only if the cost of purchasing the bonds falls. Bond holders may be protected if the issuer mortgages specific assets against bankruptcy or other default. Bonds, like shares, are underwritten by investment dealers and can be bought and sold through banks and other financial institutions and, in the case of savings bonds, through popular employer payroll-deduction plans.

Shares are either "preferred" or "common." When a company cannot pay regular dividends on all its shares, holders of preferred shares are ranked ahead of those holding common shares in receiving whatever dividends are available (these provisions may be overridden in the case of bankruptcy). Shares may or may not carry the right to vote at shareholders' meetings and to elect the company's board of directors.

An investor wanting to buy or sell bonds or shares contacts a brokerage firm and opens an account. The sales representative ("broker") of a firm advises on the relative merits of available investments and might permit an investor (with sufficient collateral) to buy or sell "on margin" - eg, the firm would lend the investor a considerable percentage of the funds required (against the investor's collateral security in case the price went to his disadvantage), charging interest on the borrowed funds. If they expect the price to drop quickly, investors can even "sell short" bonds or shares they do not own, so that they can buy them back cheaply and make a speculative profit. In such cases the firm would borrow the shares and sell them for the investor's account.

Brokers can provide a wide range of specialized services, such as the "stop order," an order to buy or sell shares only if the price touches a certain level. Investors can place a "stop sell" order at a price slightly below the current price so that if prices decline the shares would automatically be sold out at a small loss. Brokers can also sell "options," which give the right to buy or sell certain shares at preset prices at any time up to a prespecified future date, but the value of these options can fluctuate dramatically, creating a risk for the investor.

The Board of Stock and Produce Brokers was set up in Montréal in 1842 and the Montreal Stock Exchange (MSE) in 1874. The MSE listed 63 securities, including stock in banks, gas utilities, railways and mining companies and government debentures. The Toronto Stock Exchange (TSE) was established in 1852 by a group of Toronto businessmen who formed an association of brokers to create a market in industrial securities. At first they met informally in each other's offices but by 1871 they had a common meeting place and formal rules and regulations.

Expanding mining activity led to the establishment of the Standard Stock and Mining Exchange (SSME) in 1899. After the discovery of important silver and gold deposits in northern Ontario in the first decade of the 20th century, transactions on the SSME expanded dramatically and in 1934 the TSE merged with the SSME, keeping the name Toronto Stock Exchange. The Montreal Curb Market, which started on the curb outside the MSE as a place to trade shares in ventures too small or risky to meet listing requirements of the latter exchange, became the Canadian Stock Exchange, but then joined the MSE in a merger in 1974. Canada's 3 western stock exchanges are in Vancouver, Winnipeg and Calgary. They have provided local trading facilities primarily for shares in small, new ventures.

On 15 March 1999 it was announced that the 4 stock exchanges would restructure to become more specialized in an effort to increase their competitive abilities. The restructuring included a merger of the Vancouver and Alberta stock exchanges to form one common National Junior Equities Market (the Vancouver Stock Exchange), which also took over CDN (Canadian Dealing Network) activities from the TSE. Winnipeg has been invited to join the new amalgamated VSE. The TSE is now responsible for trading all Senior Canadian Equities (assuming some activity from the MSE), and Montréal is now the trading ground for all futures and options (any futures or options previously on the TSE will be transferred to the MSE).

Although the exchanges are supervised by provincial securities commissions, they are essentially self-regulating. The public's risk is minimized because brokers and dealers must be adequately capitalized against default. Public issues of new corporate bonds or shares must be cleared for distribution by the securities commissions of the provinces in which they are offered, and printed prospectuses outlining and updating important facts on the new securities must be provided to potential buyers. Because public information about the economy or companies' prospects is quickly reflected in the prices of the securities, it is difficult even for professional investors (such as managers of pension funds) to earn consistently higher rates of return than those provided by the market as a whole.

However, because "insiders" with privileged information about company affairs have been able to trade profitably on such information, the law requires public disclosure of, or may even outlaw, their trading. There have been many instances of promotional fraud and manipulation of the prices of shares, but such abuses are now illegal and severely penalized. Investors in Bre-X Minerals Limited, listed in Calgary and later on the Toronto Stock Exchange as well, bid the value of the company's shares up to over $6 billion in 1996. In 1997, they learned that they had been defrauded; the mine contained no gold. Legal actions were subsequently launched in both Canada and the US on behalf of shareholders seeking redress.

Ultimately, no security is worth more than it will fetch in the marketplace. Security prices are ultimately dependent on expectations, since they represent only the right, under certain conditions, to receive payments in the future. Securities markets uniquely blend risk, uncertainty, potential profit and potential loss; by doing so, they provide a cornerstone of the modern capitalist economy.