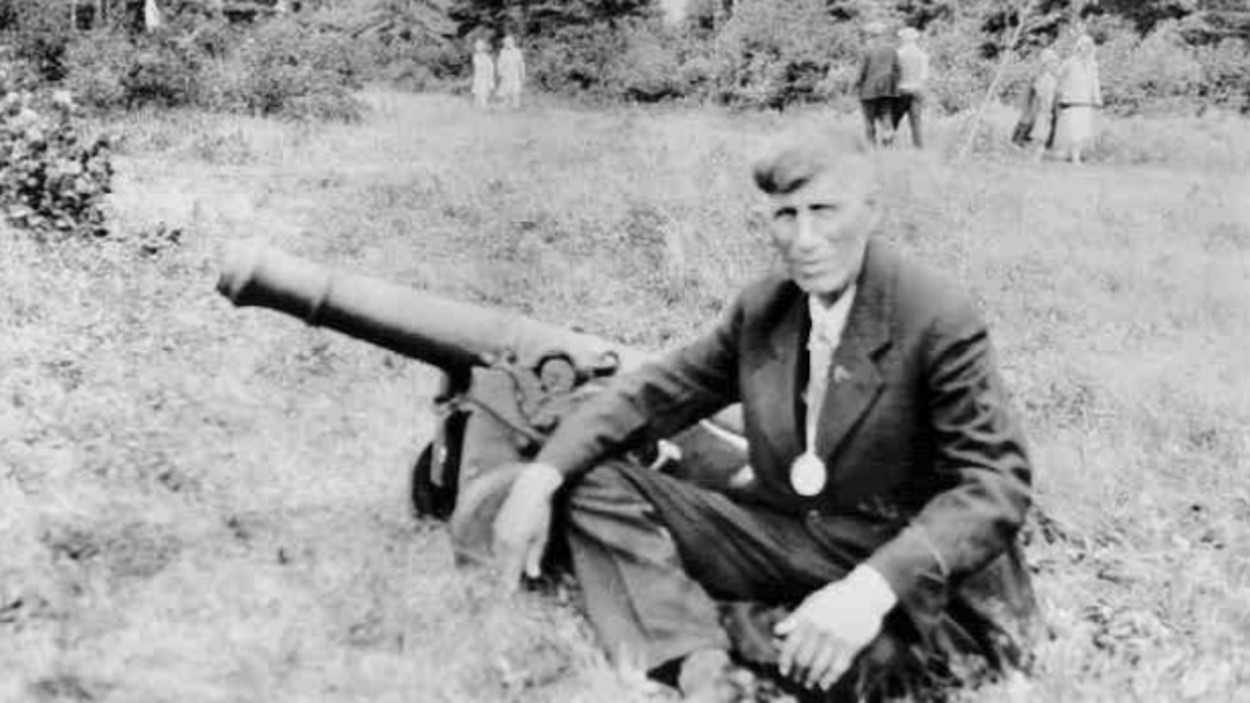 Mi'kmaq chief Gabriel Sylliboy, 1930. Sylliboy was the first to use the Peace and Friendship Treaty of 1752 to defend his people's rights to hunt and fish on traditional lands in a Canadian court of law.

In 1927, Gabriel Sylliboy, the first elected Grand Chief of the Mi’kmaq Grand Council (in 1918), was arrested on Cape Breton Island in Nova Scotia for hunting and possessing pelts out of season while off his Whycocomagh reserve. While Sylliboy argued that he had Indigenous rights to hunt and fish on the land, he was convicted of these charges in Magistrate’s Court under Nova Scotia’s Lands and Forests Act.

In R. v. Sylliboy, chief Sylliboy appealed the ruling in a County Court in July 1928, using treaty rights as a defence. He argued that the 1752 Peace and Friendship Treaty signed between the Crown and Mi’kmaq chief Jean Baptiste Cope recognized the right of his people to freely hunt and fish on traditional territories. As the treaty states, “It is agreed that the said Tribe of Indians shall not be hindered from, but have free liberty of Hunting & Fishing as usual.” Sylliboy and five members of the Mi’kmaq nation — Joe Christmas, Andrew Alec, Andrew Barnard, Francis Gould and Ben Christmas — testified at the trial, supporting the hunting rights and practices of their people.

Judge George Patterson explored aspects of Mi’kmaq treaty rights as they related to the case but ruled that the conviction stood. According to Patterson, the Mi’kmaq “were never regarded as an independent power” and therefore, could not have entered into a treaty with the Crown. Moreover, Patterson concluded that Governor Hopson, who signed the 1752 treaty with the Mi’kmaq, did not have the authority to make such an agreement. Thirty-six years after losing his appeal, Sylliboy died on 4 March 1964.

The Simon Case and its Impact

In 1981, James Simon of the Mi’kmaq nation was convicted, much like Gabriel Sylliboy before him, under Nova Scotia’s Lands and Forests Act for possession of a rifle and shotgun cartridges. Similar to the Sylliboy case, the Court of Appeal upheld the judge’s ruling that the Treaty of 1752 did not exempt Simon from provisions of the provincial Lands and Forests Act.

Parallels between the two cases ended when R. v. Simon went to the Supreme Court of Canada in 1985. Simon argued that the right to hunt, as set out in the Treaty of 1752, combined with section 88 of the Indian Act, offered his people immunity from prosecution under the provincial act. (Section 88 states that although provincial laws of general application apply to Indigenous peoples in Canada, these are subject to the terms of any treaty.)

In its unanimous judgment on the case, the court ruled that, based on the 1752 treaty, Simon had the right to hunt for food anywhere in Mi’kmaq country. This right was not absolute; it had to include “reasonably incidental activities” such as travelling with necessary equipment to the hunting grounds and safe ownership of a hunting rifle and ammunition.

Despite these limitations, the court’s ruling vindicated Simon and overturned the Sylliboy decision. Chief Justice Brian Dickson stated that “the language used [in the Sylliboy case] reflects the biases and prejudices of another era in [Canada’s] history. Such language is no longer acceptable.”

Since the Sylliboy case, section 35 of the Canadian Constitution enshrined the rights of Indigenous peoples, and as a result, higher courts began to recognize treaties with Indigenous peoples as potential justifications for offences against provincial jurisdiction.

Today, the Treaty of 1752 remains in effect.

DID YOU KNOW?
In the case of R. v. Marshall (1999), Donald Marshall Jr., the son of a Mi’kmaq grand chief, was charged with illegal fishing in Nova Scotia. He defended himself using the Peace and Friendship Treaties of 1760 and 1761. Marshall won his case; the Supreme Court ruled that the Mi’kmaq could earn a living from fishing and hunting as their ancestors once did. It also stated that courts must “choose from among the various possible interpretations… the one which best reconciles” Indigenous interests and those of the Crown.

On the 50th anniversary of Gabriel Sylliboy’s death in 2014, his family raised the issue of requesting an apology or pardon from the provincial government for his wrongful conviction with the Mi’kmaq Grand Council. Grand Keptin Andrew Denny of the council first approached the premier of Nova Scotia about the matter in 2016. In March of that year, Nova Scotia’s chiefs formally asked the provincial government to act.

On 16 February 2017, Sylliboy received a posthumous free pardon from Lt.-Governor J.J. Grant. A free pardon, which recognizes that a conviction was made in error, is considered “only in the rarest of circumstances,” according to the office of the premier. This marked just the second posthumously granted free pardon by the province. (The first went to Viola Desmond in 2010.)

Lt.-Governor Grant said that Sylliboy was pursuing his “aboriginal and treaty rights” and called the pardon “a process of treaty education,” which included “understanding and valuing what the Mi’kmaq have contributed in shaping this province and nation.”