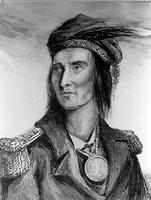 Tecumseh allied his forces with those of the British during the War of 1812, and his active participation was crucial. Painting by W.B. Turner (courtesy Metropolitan Toronto Library, J. Ross Robertson/T-16600). 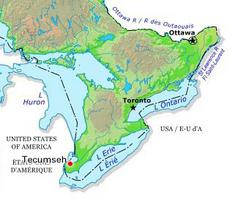 Tecumseh, Ont, incorporated as a town in 1921, population 23 610 (2011c), 24 224 (2006c). The Town of Tecumseh is located in southeastern Ontario east of the city of Windsor on Lake St Clair. In 1999 the town's boundaries were extended when it was amalgamated with the township of Sandwich South (incorporated in 1893) and the village of St Clair Beach (incorporated 1914). The amalgamation nearly doubled the town's population and greatly increased its land base. The town is named after the Shawnee war chief TECUMSEH, who was an ally of the Canadians and British during the War of 1812.

First settlement in the area dates from the 1790s, and throughout the 19th century the population was almost exclusively rural. Tecumseh grew first as a stopping place on the road between London and Windsor and then as a railway station. The town became a service centre for the surrounding area, which is rich in productive agricultural land. Today the major employer in Tecumseh is a vegetable-processing plant (Family Tradition Foods). In keeping with its agricultural roots, each August the town hosts the Tecumseh Corn Festival.