The day caught Prime Minister Lester B. Pearson and the Conservative Leader of the Opposition, John Diefenbaker, in very different moods. Diefenbaker dramatically pushed away his tears. He had fought the arrival of this moment every step of the way. (See also: The Great Flag Debate.) Pearson was sick with a bad cold. He left his bed to attend the festivities and returned there immediately afterward. But he was triumphant. He called the flag “a new stage in Canada’s forward march.”

After defeating Diefenbaker in the April 1963 election, Pearson had been full of promise — and promises. During his first year in power, however, the Liberal leader stumbled often and badly. Diefenbaker grabbed Parliament by the throat. Pearson seized on the flag as a political weapon. He wanted to reclaim the legislative initiative, rejuvenate a wounded Liberal Party and heal divisions in the country. It had been knocked off balance by the assertive nationalism of Quebec’s Quiet Revolution.

Without asking or telling his Cabinet colleagues, in mid-May 1964, Pearson put on his war medals and marched off to the national convention of the Royal Canadian Legion in Winnipeg. There, before an angry crowd of veterans, he announced his determination to give Canadians a flag with the maple leaf as its dominant design. The vets had fought under the Canadian Red Ensign, which combined the British Union Jack and the Canadian coat of arms. It had long been the unofficial Canadian flag. “Keep it Flying,” the Legion insisted.


In Winnipeg, Pearson had been given a taste of what Diefenbaker was about to deliver in Ottawa. When Pearson put his proposal before Parliament in June, the Opposition leader shamelessly wrapped himself in the Red Ensign. He demanded that the people be consulted in a plebiscite. He claimed that Pearson’s design — with three red maple leaves centred on a white background with blue edges — had nothing of Canada’s majestic traditions, its British and Christian past. “Pearson’s pennant,” Diefenbaker huffed.

Pearson forced members of Parliament to stay over the summer, but that did not help. Finally, in September, the issue was shuffled off to a parliamentary committee. As Liberal MP John Matheson, the key member of the 15-person panel, recalled, “With a gun at our heads, we were asked to produce a flag for Canada and in six weeks!” The committee held 35 bruising meetings. Thousands of suggestions poured in from a public fully engaged in what had become a great debate about Canadian identity and how best to represent it. (See also: Flag of Canada: Alternate Designs.)

At the last minute, Matheson slipped a flag designed by historian George Stanley (with elements by George Bist) into the mix. It had a single red maple leaf in a white square flanked by two red borders. The committee’s final contest pitted Pearson’s pennant against the Stanley flag. Assuming the Liberals would vote for the prime minister’s design, the Tories backed Stanley. They were outfoxed. The Liberals voted for the red and white flag, too, making the selection unanimous.

The committee had made its decision, but not the House of Commons. Still, Diefenbaker would not budge. He and his traditionalist lieutenants mounted a filibuster and prolonged the debate for another six weeks. Finally, one of Diefenbaker’s own senior members, Léon Balcer, broke ranks and advised the government to cut off debate. Pearson did so, and the final vote adopting the Stanley flag took place at 2:15 a.m. on the morning of 15 December. Balcer and the other francophone Conservatives swung their support behind the Liberals.

The Monday crowd on the initial Flag Day in Ottawa welcomed their new symbol of sovereignty politely but not exuberantly. It was a committee’s compromise reached after a six-month parliamentary train wreck. It threatened national unity and diminished almost everyone who touched the prickly issue.

Yet there was, from the very beginning, a broad and instinctive acknowledgement that members of Parliament had chosen well, even if they had chosen chaotically. As journalist George Bain wrote the morning after the first flags had flown, Canada’s maple leaf emblem “looked bold and clean, and distinctively our own.” 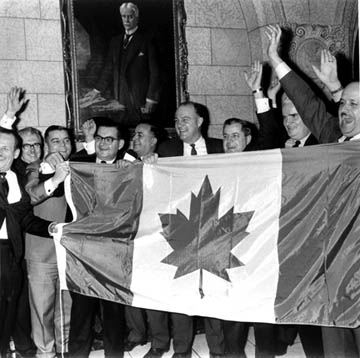