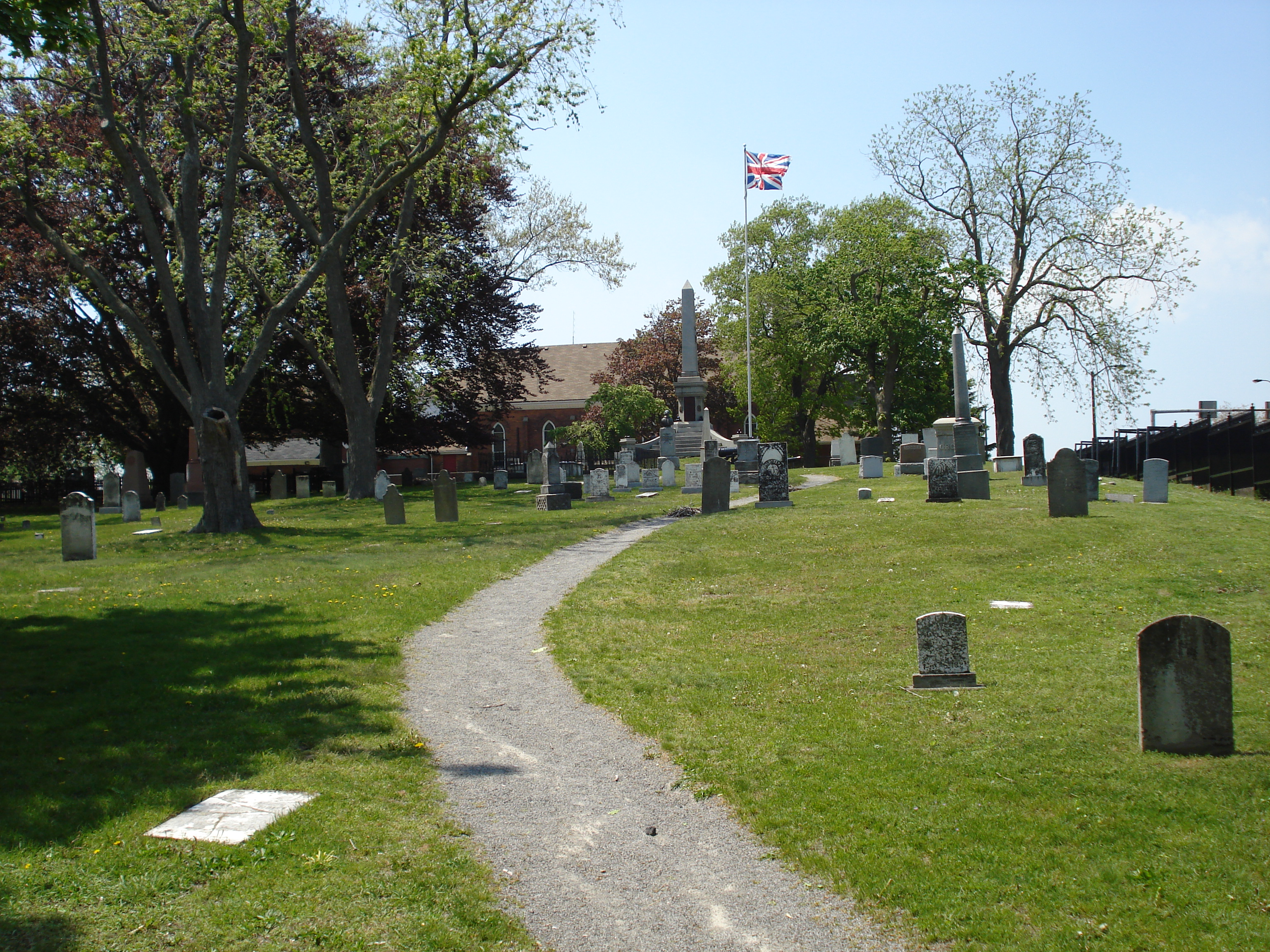 The morning of 25 July 1914 dawned with the promise of a warm and sunny summer day. By the early afternoon large crowds of spectators began to gather in Niagara Falls’ Drummond Hill Cemetery to await the arrival of a 2,000-strong procession of politicians, militia, local Historical Society members, school children and Six Nations chiefs. The parade made its way past the crowds that lined Lundy’s Lane, which was cheerfully decorated with the Union Jack and the Stars and Stripes. The procession passed through a huge commemorative arch, decorated with more flags and bunting, before entering the cemetery. The waiting crowd’s patience was rewarded as dignitaries made their way to a speaking platform while school children sang “The Maple Leaf Forever.” Around 10,000 people attended the celebration that hot July afternoon, lining the streets and crowding into the cemetery to hear the dignitaries’ patriotic speeches. 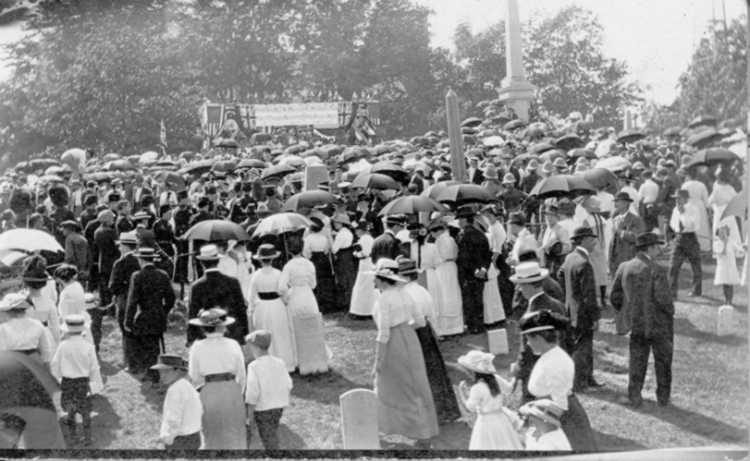 The event the crowd and dignitaries had gathered to celebrate was the centennial of the Battle of Lundy’s Lane, one of the most famous engagements of the War of 1812. A Canadian history published in 1899 termed it the “greatest battle in our history,” and after the war, many considered it to have been the bloodiest of the conflict. In early July 1814 an American invasion force crossed the Niagara River and captured Fort Erie, then advanced north. On 25 July 1814 British forces took up a defensive position at Lundy’s Lane, a hill within hearing distance of the mighty Niagara Falls. American forces encountered the British around 7:15 p.m. that night, eventually driving them from their position. The battle was fierce and fought mostly in the dark, with some troops fighting hand-to-hand or with bayonets. After a long night of bloodshed the exhausted American forces retreated, and the British reclaimed the battlefield the next morning. The battle was the bloodiest of the war so far, with 255 killed and over 1,400 wounded or missing. 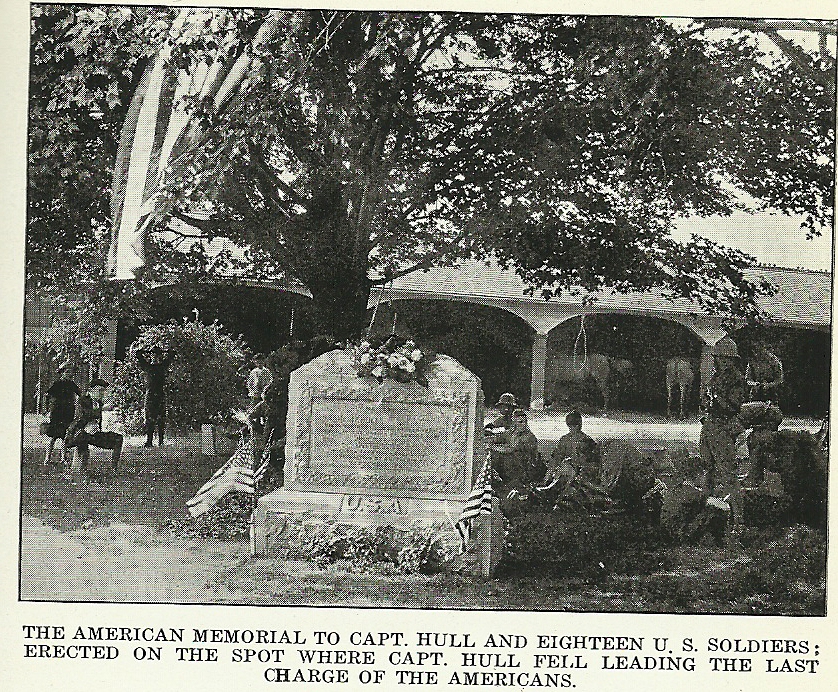 The city of Niagara Falls had grown since that night. In 1914, Drummond Hill Cemetery was all that remained of the battlefield. The centennial celebration held there was made possible by the efforts of the Lundy’s Lane Historical Society, a local organization founded in 1887 to promote early Canadian history, and keep alive the memory of “the brave men of 1812 and ‘14” in the Niagara Region. The Society organized the event, and had received a grant of $2,000 from the Dominion government to cover expenses. They had been planning for months, and eagerly awaited the grand celebration. 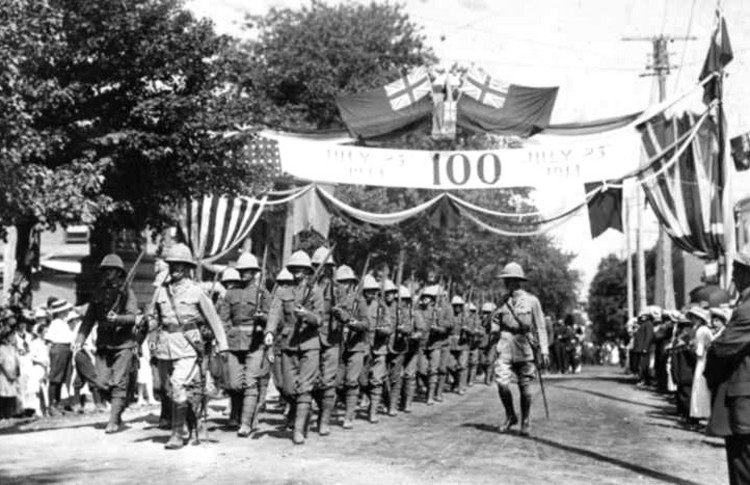 When the day finally came, the speakers on the platform were a mix of Canadian and American officials who stood together where 100 years previous, their compatriots had fought. The centennial’s biggest theme was celebrating 100 years of peace between Great Britain and the United States, although it was questionable whether the battle had really marked the beginning of a peaceful century, or to what extent peace had reigned in the 100 years since. Lundy’s Lane was not the last battle of the War of 1812 (it was followed by others, including the Siege of Fort Erie), but many thought of it that way. Additionally, though relations between Great Britain and the United States had been improving, the century since the war’s end had not been entirely free of conflict. There were numerous political disagreements between the two countries, including the Alaska Boundary Dispute and disagreements over fishing rights. However, these had not led to either country taking up arms, and, despite some disagreements, the War of 1812 remained the last war between the two nations. This, along with the perception that the battle was the last of the war, meant that the celebration was widely promoted and perceived as an event celebrating 100 years of peace between the countries, despite its commemoration of a battle between them. It was also linked to a larger international peace celebration being planned by British, American and Canadian groups for early 1915 to mark the centenary of the signing of the Treaty of Ghent that had ended the war.

Nevertheless, participants in the Lundy’s Lane celebration embraced the message of a century of peace, although there was some disagreement between the American and Canadian speakers over who had actually won the Battle of Lundy’s Lane. One speaker from Buffalo, New York, observed “this battle has waged in the books for 100 years.” These disagreements did little to dampen the celebration, and those present agreed that a new war between the United States and Great Britain was unthinkable.As Buffalo-based historian George Emerson noted, war was impossible because the two peoples shared the “same origin, [spoke] the same language, [and] read out of the same Bible.” 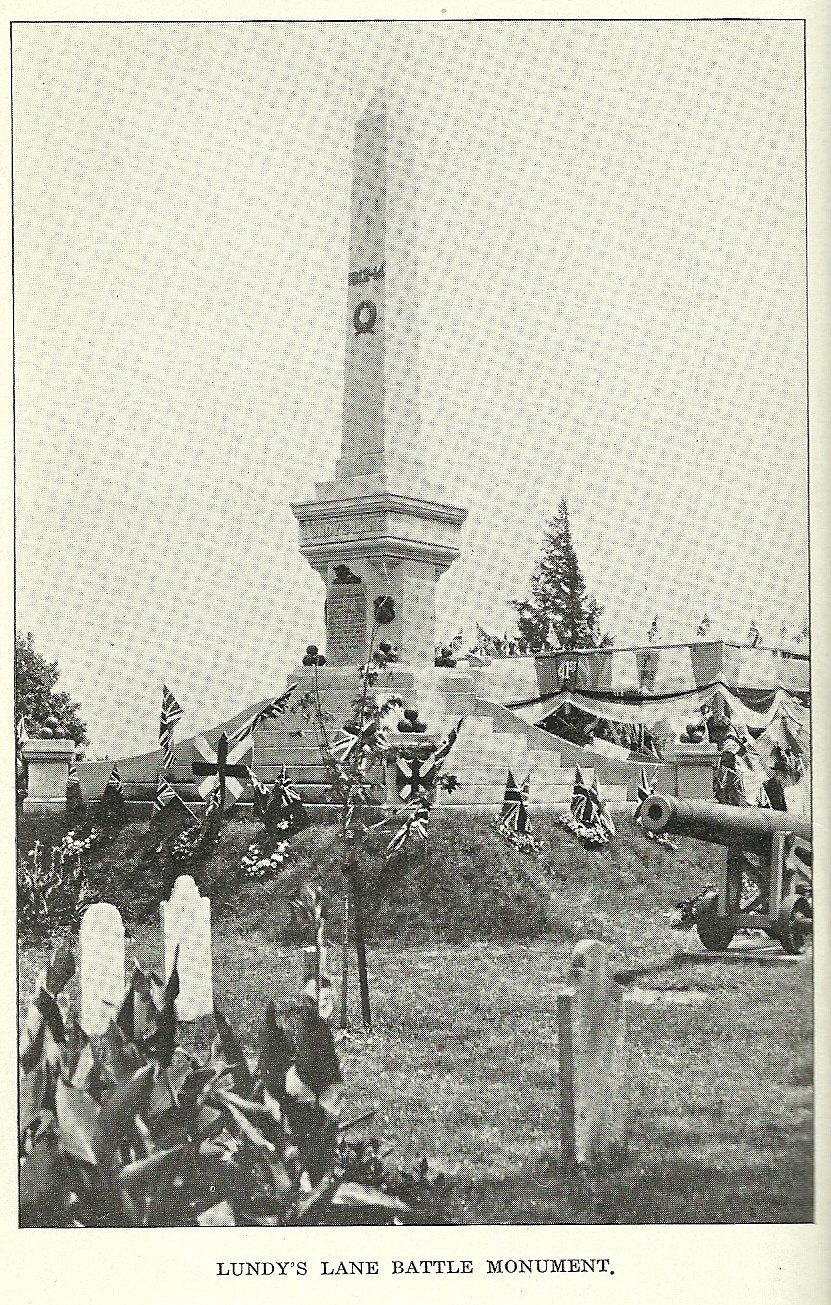 The speakers also honoured the dead from both sides of the Niagara River, explaining that no matter on which side they had fought, soldiers from both countries had died performing their duty. The cemetery was home to monuments honouring the dead from both sides, one erected by the Dominion government in 1895 to commemorate the British dead, and a smaller monument to the American dead erected by the Niagara Frontier Landmarks Association in 1907. The monuments and graves of the dead were decorated with the flags of their respective countries, and one of the highlights of the centenary took place when six Canadian and six American young women together placed wreaths on both of these monuments.

The celebration of the centenary of the Battle of Lundy’s Lane was deemed a success by all involved. The ceremony had paid tribute to those who had died in the fighting while celebrating a century of peace that most believed would continue for at least another 100 years. As the crowds trickled out of Drummond Hill Cemetery that summer night, however, they could not know that their peace celebration would soon be overshadowed by the Great War, declared only weeks later.