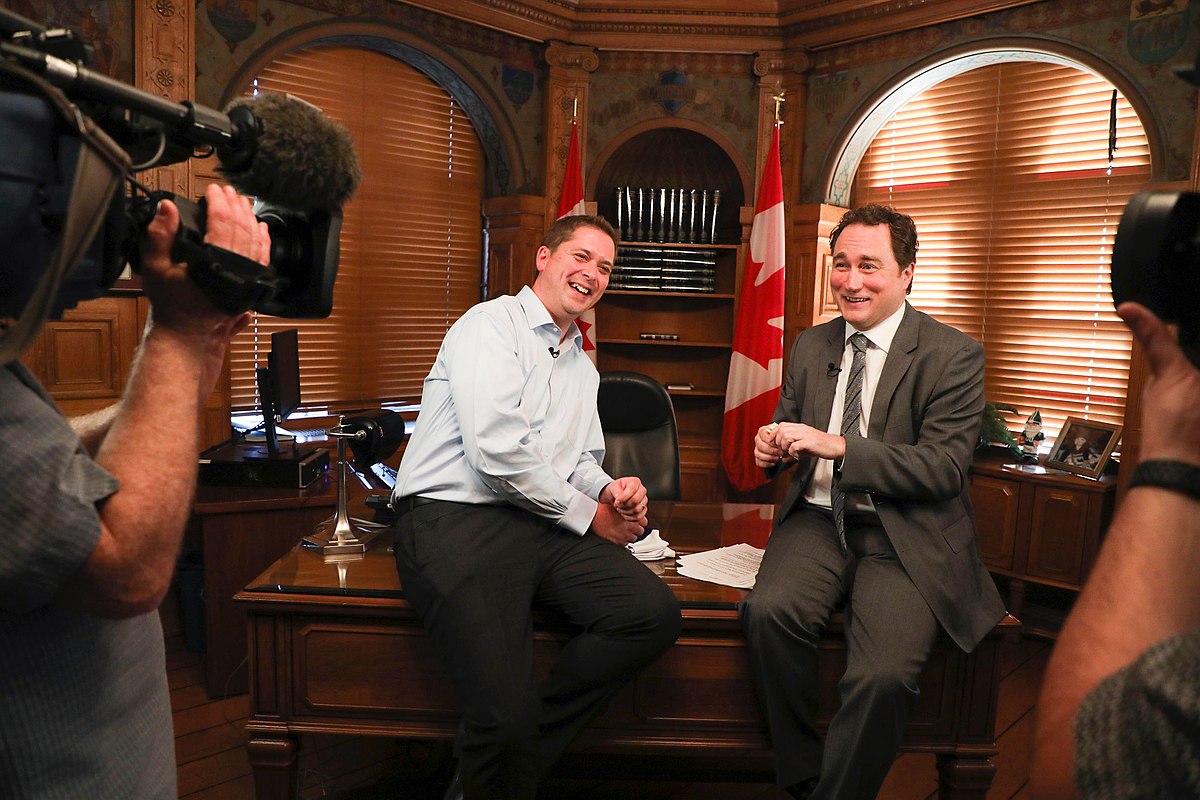 Andrew Scheer, leader of the Conservative Party of Canada, being interviewed by Mark Critch of This Hour Has 22 Minutes, 26 October 2017.

This Hour Has 22 Minutes was originally conceived by Newfoundland comedian Mary Walsh as a follow-up to the CBC sketch-comedy series CODCO (short for “Cod Company”), which aired from 1987 to 1992. Walsh brought the idea for a weekly satirical news show to Michael Donovan, the executive producer of CODCO, who pitched it to CBC. After the broadcaster green-lit six episodes, Walsh and Jones added two other Newfoundlanders to the cast: fellow CODCO alumnus Greg Thomey, and Rick Mercer, an up-and-coming writer and performer who had recently gained national recognition for his one-man stage shows Show Me The Button, I’ll Push It (or Charles Lynch Must Die), and I’ve Killed Before, I’ll Kill Again.

The title, This Hour Has 22 Minutes, references the groundbreaking satirical current affairs show This Hour Has Seven Days, which aired on CBC TV from 1964 to 1966, when it was cancelled due to controversial content related to the Steven Truscott case. The “22 minutes” alludes to the average duration, minus commercials, of every half-hour segment of network television. This blatant critique of television programming trends distilled in the show’s title would reflect the ongoing satirical boldness of its content.

The first episode of This Hour Has 22 Minutes, taped in front of a live audience of about 200 people in downtown Halifax, aired on 11 October 1993. Directed by Henry Sarwer-Foner, the format featured a mock newscast interspersed with satirical skits taking aim at a wide range of political and media personalities — a format that would later be popularized by some of the most influential TV comedy programs of the next two decades, such as The Daily Show with Jon Stewart.

This Hour Has 22 Minutes was an immediate success, with the premiere attracting more than 400,000 viewers. Over the next few episodes viewership rose substantially, and by the fourth episode (which drew 750,000 viewers), CBC had commissioned a full season. CBC advertised the new hit show, airing on Monday evenings, as a “volatile mix of news parody, sketch comedy, scathing editorial commentary and the collective comic genius of the dynamite cast and their alter egos.”

This Hour Has 22 Minutes has had numerous changes to its cast throughout its long run. In 2001, Rick Mercer, who was already three seasons into his CBC sitcom Made in Canada, left the show. He subsequently developed Rick Mercer Report, a family-friendly, current events CBC comedy show, which eventually aired in the time slot immediately before 22 Minutes. Mercer was replaced by Colin Mochrie, the Canadian improv comedian best known for his appearances on ABC’s hit improv comedy show, Whose Line Is It Anyway? Mochrie dropped out of the show in 2003 due to the demands of commuting between Halifax and Los Angeles.

Mary Walsh described the 22 Minutes environment as “a hotbed of fervid, seething creation,” but said that “after I got to year nine, or year 10, I realized I wasn't coming up with any new characters. I didn't know how long I could effectively go on doing what I was doing.” She left the show in 2004 to pursue other film, television and writing projects, but has returned for the occasional cameo.

The Alberta-born comic Gavin Crawford was asked to fill in for Walsh in 2003 and ended up serving as both a writer and cast member for eight seasons. Two other longtime cast members also joined the show in 2003: the St. John’s comic Mark Critch, who was hired as a writer when Mercer left in 2001; and Newfoundland-raised comedian Shaun Majumder, who also served as a writer in 2003–04, 2011–13, and 2016. 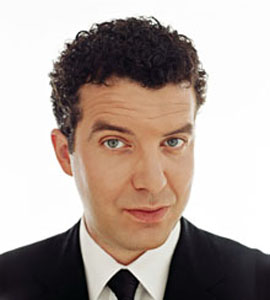 The cast’s development of recurring alter egos has played a large role in the success and originality of the series, which gained considerable notoriety for its unconventional interviews with politicians and famous Canadians. The cast members, often in character as one of their alter egos, would frequently ambush their subjects at public events.

One of the cast’s best-known alter egos is Cathy Jones’s “Joe Crow,” an elderly Indigenous man who mournfully bemoans the environmental crimes of the modern world. Greg Thomey enjoyed success as the hyperactive “Jerry Boyle,” the scandal-ridden, haplessly optimistic leader of “The Newfoundland Separation Federation.” Mary Walsh embodied “Marg Delahunty,” a self-proclaimed cultural and political pundit who directs her sharp opinions and wit towards patriarchal systems of power. And Rick Mercer developed his now iconic “rants,” which feature him pacing through a heavily graffitied alley delivering a political diatribe directly at the camera.

Gavin Crawford created a number of the show’s most memorable characters, such as “Mark Jackson,” an acne-scarred, braces-wearing, terminally awkward teen correspondent who frequently interviews prominent Canadian politicians. Mark Critch quickly became a mainstay on the program and developed a number of iconic acts, such as his imitation of the notoriously verbose CBC pundit, Rex Murphy. Shaun Majumder’s best-known alter ego is a profusely sweating, heavily accented reporter named Raj Binder, who asks pointed questions while exaggerating and oversimplifying cultural differences until they become ridiculous.

Rick Mercer’s“Talking to Americans” was one of the show’s most successful recurring bits. Posing as a Canadian journalist, Mercer travelled throughout the United States, asking Americans questions about Canada that were designed to expose their ignorance of the neighbouring country. In 2000, Mercer asked George W. Bush, at the time a US presidential candidate, about his endorsement of the Canadian prime minister, “Jean Poutine,” a perversion of the then prime minister’s actual name, Jean Chrétien. Bush replied in earnest that he looked forward to working with his counterpart to the north. The gag was a huge success in Canada. In 2001, Mercer transformed “Talking to Americans” into an hour-long special, which attracted international attention and 2.7 million viewers, making it the highest-rated comedy special in CBC history.

During the 2000 federal election campaign, in response to a proposal by Canadian Alliance leader Stockwell Day to hold binding referendums on issues that gained the support of 3 per cent of the population, Mercer did a bit asking 3 per cent of Canadians to sign a petition that would require Day to change his first name to Doris. “We all saw this as a back-door way to get abortion, capital punishment, gay rights, those types of hot button issues on a ballot,” Mercer said. The Alliance lost the election and Day was removed as leader a year later.

In 2004, This Hour Has 22 Minutes recorded a short promo skit that featured Liberal MP Carolyn Parrish stomping on a George W. Bush doll. Outrage surrounding the skit contributed to Parrish’s eventual expulsion from the Liberal caucus and became a national news story. “We do a parody of the news here and suddenly we were part of this news frenzy,” Mark Critch said in a 2005 interview with the Globe and Mail. “It was a really useful lesson in how the media works.”

In 2011, Mary Walsh made a guest appearance on This Hour Has 22 Minutes as one of her classic characters, Marg Delahunty. She showed up at the house of Toronto mayor Rob Ford, who was then embroiled in a crack cocaine scandal, to record an ambush-style interview. Ford called 911 and later claimed that he had never heard of This Hour Has 22 Minutes.

In addition to many of the cast members who also served as writers, This Hour Has 22 Minutes has featured the work of some of the top comedy writers in Canada, including: Tim McAuliffe (The Hour, Corner Gas, Late Night with Jimmy Fallon), Mark Farrell (The Red Green Show, Corner Gas, Made in Canada), Jennifer Whalen (Insecurity, Baroness von Sketch Show), Carolyn Taylor (Baroness von Sketch Show), Barry Julien (The Colbert Report, The Late Show with Stephen Colbert) and Ron Sparks (Comedy Now!, Little Mosque on the Prairie).