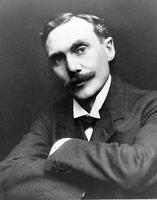 Thomas Walter Scott, politician, journalist, printer, premier of Saskatchewan (b at London Twp, Ont 27 Oct 1867; d at Guelph, Ont 23 Mar 1938). As the first premier of Saskatchewan, he played a key role in the province's early development. Thomas Walter Scott went to PORTAGE LA PRAIRIE in 1885 and apprenticed as a printer. He moved to REGINA in 1886 and by 1896 had become an influential journalist and owner of the Regina Leader and the Moose Jaw Times. As the Liberal member for Assiniboia West in 1900 and 1904, Thomas Walter Scott participated in the autonomy debates. In 1905 he was chosen leader of the Saskatchewan Liberal Party and asked to form the first provincial government. Under his leadership, the party won the elections of 1905, 1908 and 1912. Ill health forced him to resign in October 1916 and he retired from public life.