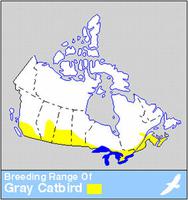 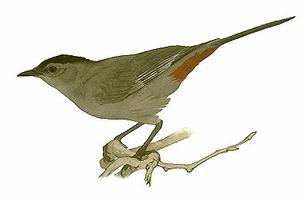 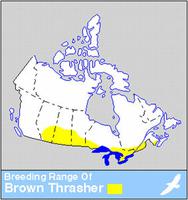 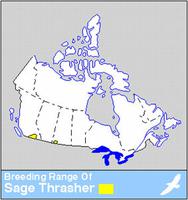 Thrashers (Mimidae) are a small family of slender, long-tailed, medium-sized, insectivorous and frugivorous birds with loud, musical, repetitive songs. Some species mimic songs of other birds. The family comprises 34 species. This family, which is restricted to the New World, apparently evolved in the American tropics and is most closely related to starlings.

Four mimids breed in Canada, including thrashers, brownish above with whitish, brown-spotted or plain breasts; mockingbirds, blue or grey above and whitish below; and catbirds, grey or black overall. The widespread but rare northern mockingbird (Mimus polyglottos) is a permanent resident in southern Canada. The migratory gray catbird (Dumetella carolinensis) summers from southern BC to Cape Breton Island. The brown thrasher (Toxostoma rufum), also migratory, occurs from southeastern Alberta to southern New Brunswick. Both species frequent scrub and woodland edges. The migratory sage thrasher (Oreoscoptes montanus) is a local summer resident in sagebrush grassland in southern BC and, rarely, southwestern Saskatchewan.

Mimids breed May-July, building bulky nests of twigs and grasses placed low (under 6 m) in shrubs or trees or on the ground (eg, sage thrasher). They lay 4-5 eggs per clutch. Mimids are territorially aggressive. They are parasitized, rarely, by the brown-headed cowbirds (Molothrus ater).