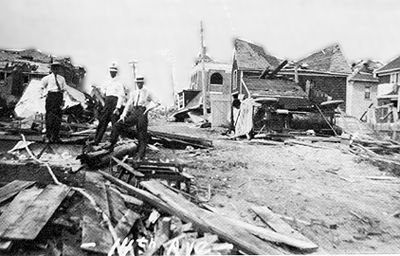 The tornado that struck the core of Regina on 30 June 1912 killed 28 persons and caused million in damages (courtesy SAB). 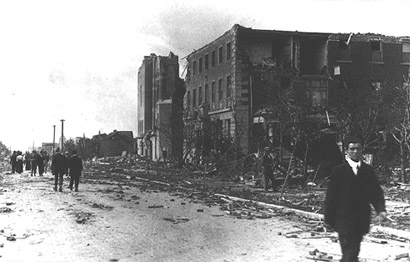 Downtown Regina after the tornado struck in 1912. Twelve city blocks were left in ruins (courtesy Saskatchewan Archives Board).
PreviousNext

Tornadoes are a type of severe storm. They are typified by a funnel-shaped cloud descending toward the earth. With the exception of the Arctic, where tornadoes are virtually unknown, tornadoes may occur anywhere in Canada, and are most common in the Prairies, Ontario and Québec. Canada’s most fatal tornado occurred on 30 June 1912 in Regina, Saskatchewan; it took 28 lives.

A tornado is an intense rotary storm of small diameter (i.e., tens or hundreds of metres), characterized by at least one vortex reaching the earth's surface. The vortex is usually visible as a funnel cloud associated with a thunderstorm, although on occasion it is invisible. In either case, damage results at ground level. A tornado may be composed of a single funnel, several funnels occurring simultaneously, one or more funnels reforming one after the other, or various combinations of these states.

A tornado's life cycle typically consists of three stages. It starts when a funnel-shaped projection – called a tuba – develops beneath a rotating section of a thunderstorm. The tuba elongates downward from the cloud and is enveloped by a rotating sleeve – called the annulus – that develops upward from the ground. The full merging of the two creates a mature tornado vortex. This stage is followed by the third or degenerating phase, when the tuba rises back towards the cloud base and disappears. Cases where the tuba alone develops are called "funnels aloft" and are not tornadoes. The rotation of tornadoes is almost always cyclonic (clockwise in the northern hemisphere, counter-clockwise in the southern hemisphere, when the circling clouds are viewed from below).

Tornadoes occur in all parts of Canada except those with an Arctic climate, where they are virtually unknown. They are relatively frequent in the interior, from New Brunswick to the Rocky Mountains, and are most common in southern Ontario (which experiences an average of 21 per season), followed by southern Manitoba. Canada ranks second in the world for the occurrence of tornadoes, averaging 80–100 tornadoes annually, compared to an average of 1,000–1,200 in the United States. The incidence of tornadoes in Canada is probably higher than that, but Canada has large, unmonitored and sparsely populated areas where tornadoes may go unreported.

In Canada, the tornado season begins as early as March and ends as late as October, generally lasting 107 days in the interior and about 60 days elsewhere. Activity peaks in late June and early July. The average tornado causes a damage area of 0.6 km2. A tornado is most likely to occur in the afternoon, between 3–7 p.m. local standard time, and to approach from the west or southwest.

Tornadoes range in intensity from very weak (winds from 64 km/h) to devastating (winds up to 509 km/h), on a scale of 0–5 devised by Japanese-American meteorologist T. T. Fujita. More than 90 per cent of Canadian tornadoes can be categorized as weak, or F0 to F1 on the Fujita scale. Tornadoes ranked F0 are called light and are characterized by winds of 64–116 km/h. They can cause damage to roofs and trees. Those ranked F1 are classified as moderate, with winds of 117–180 km/h, and can cause damage such as overturned cars and uprooted trees.

Severe tornadoes recorded in Canada include the Regina tornado of 30 June 1912, which killed 28, injured hundreds and demolished much of the downtown area. It was rated as F4 (i.e., devastating, with winds of 331–417 km/h). It was rivalled by the Edmonton tornado of 31 July 1987, which also ranked as an F4. It took 27 lives, injured more than 200, left more than 400 homeless and caused damage along a 40 km track. The damage was estimated at more than $250 million. The severity of this tornado was unprecedented in Alberta.

Another example of an F4 tornado occurred as part of a major tornado outbreak (in this case a family of tornadoes moving along eight well-defined tracks) that swept across southern Ontario 31 May 1985, causing an estimated $100 million in property damage. This particular tornado devastated the southern section of Barrie and was responsible for eight of the 12 deaths that occurred during the outbreak. Fortunately, less than 1 per cent of all tornadoes in Canada fall into the F4 category.

Also in Ontario, on 17 June 1946, a tornado formed in the Windsor area, eventually moving east toward Tecumseh. Often referred to as the Windsor-to-Tecumseh tornado, the storm took 17 lives, injured hundreds more and destroyed about 400 homes. The tornado is thought to have been either an F4.

The first officially documented F5 tornado in Canada struck Elie, Manitoba, 22 June 2007. An F5 tornado is classified as “incredible” and has winds of 418–509 km/h. It is strong enough to lift sturdy-framed houses off their foundations, hurl automobile-sized objects more than 100 m through the air, strip bark off trees and cause considerable damage to reinforced-concrete structures. The Elie tornado was on the ground for 35 minutes and travelled approximately 5.5 km, causing damage along an area 300 m wide. Winds reached 420–510 km/h at the tornado's most intense point. Fortunately, there were no fatalities or serious injuries.