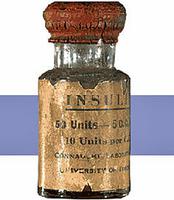 A vial of insulin produced in 1923, two years after insulin was discovered (courtesy Connaught Laboratories, University of Toronto). 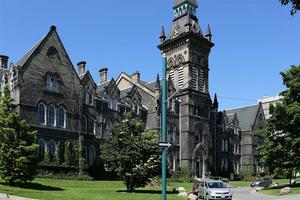 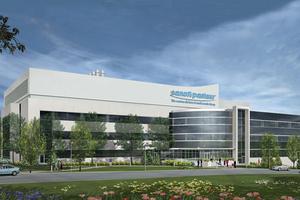 In 1913, Dr. John G. FitzGerald invested his wife's inheritance to build a small laboratory and stable. His aim: to use horses to develop an antitoxin against diphtheria, the number one killer of children at the time. FitzGerald's success led to the establishment on 1 May 1914 of the University of Toronto Antitoxin Laboratory, which soon after became Connaught Laboratories (later Sanofi Pasteur Limited), a world leader in the battles against diabetes, polio and many other diseases.

The lab was still new when Banting and Best discovered insulin in 1921. Connaught became the world's first producer of insulin, with Charles Best himself the director of production.

More triumphs followed. The lab created the revolutionary blood anticoagulant Heparin in the 1930s, a development that ultimately made open-heart surgery and organ transplants possible. In the 1950s, Connaught created the synthetic Medium 199 and the "Toronto method" of incubation that enabled Dr. Jonas Salk to develop a safe polio vaccine. Later, it produced the Sabin live oral polio vaccine, new vaccines against influenza and measles, and a freeze-dried smallpox vaccine that helped in the global eradication of that dreaded disease.

By the late 1960s, Connaught's size had outgrown the university. It was sold to accommodate the needs of worldwide production and distribution. Today, the Toronto Connaught campus is Sanofi Pasteur Limited, part of a multinational conglomerate and a long stretch from Dr. FitzGerald's first stable.