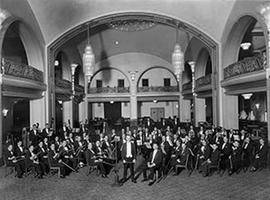 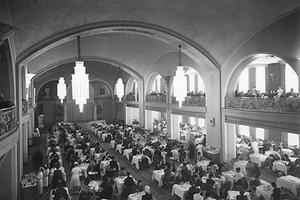 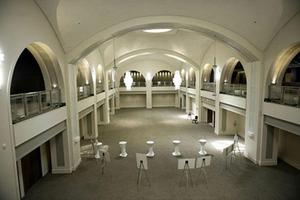 "A veritable fairyland of phantasy where Grecian architecture is blended with art moderns" was the Globe's initial impression of the Arcadian Court when it was unveiled to the public on 11 March 1929. The centrepiece of the latest expansion to Simpson's department store, the two-storey art deco restaurant, with its seating capacity of 1000, was considered the largest dining room in Canada. The restaurant's signature dish, chicken pot pie, sold well for decades--during the early 1980s, at least 1500 left the kitchen each week.

The dining room's seating could be expanded for events like spring fashion shows and even auto shows. While anyone could eat in the main dining area on the eighth floor, the mezzanine one floor up was reserved for men only for several decades.

The Arcadian Court successfully competed with the Royal York Hotel and Eaton's Round Room as the city's classiest dining spots, even during the depths of the Great Depression. It was renovated at least four times over its lifespan, but business had dropped off drastically by the most recent renovation. The space was relaunched as an event venue by the Oliver Bonacini restaurant group in 2012, and still serves the famous chicken pot pie.