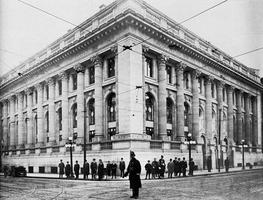 The design of the Bank of Toronto was based on the Paris Bourse (stock exchange), with street facades finished in Tennessee marble, circa 1913 (courtesy Library and Archives Canada). 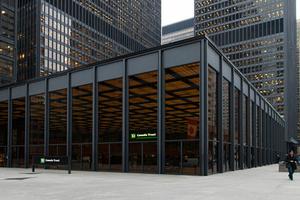 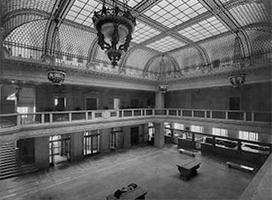 The magnificent interior of the now-demolished Bank of Toronto, regarded as perhaps the best in the city (courtesy Toronto Reference Library/Baldwin Room).
PreviousNext

"Architectural Masterpiece Replaced by Another"

The choice in 1901 of the New York firm of Carrère & Hastings to design the new Bank of Toronto was controversial among nationalistic Canadian architects. But C&H were the storied designers of the gilded age, revered for Beaux-Arts masterpieces such as the New York Public Library.

The eclectic design of the Bank of Toronto featured impressive facades along Bay St and King St West, finished in Tennessee marble. They were dominated by large colonnades of fluted Corinthian columns, which stood on a paneled pedestal separated by balustrades. A smooth-faced plinth elevated the structure above the traffic, expressing the impregnable security of the building. It stood like a magnificent pavilion of monumental elegance. Inside, a splendid hall formed the centre of the building. With a high skylight of bronze and glass, finished with marble, it was by far the finest of the city's commercial interiors.

The Bank of Toronto was completed in 1913 and remained the bank's headquarters until 1955 when the bank amalgamated with the Dominion Bank to form the Toronto-Dominion Bank. In 1965 the Bank of Toronto was demolished and replaced by the present Toronto-Dominion Centre. There was no effort to preserve the older building, pieces of which were saved and placed in the Guild Inn's sculpture garden in Scarborough. Although the demolition of the original building represented a huge architectural loss, Mies van der Rohe created a masterpiece of modern glass and steel in its place, with a nod to its predecessor in its one-storey banking pavilion on the corner site of the old building.