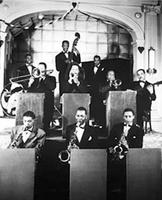 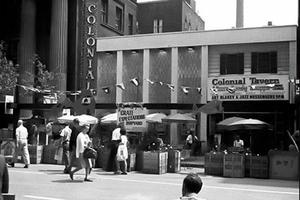 The Colonial Tavern was one of Canada's most famous jazz venues, circa 1960s-70s (public domain). 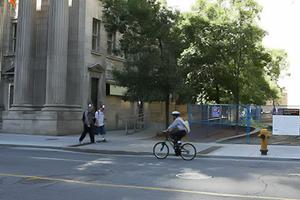 The vacant lot where the Colonial Tavern once sat, next to the Bank of Toronto (photo James Marsh).
PreviousNext

The Colonial Tavern was one of the first establishments in Toronto to be granted a liquor licence after the Second World War. With a sophisticated booking policy featuring the top names in blues and jazz, it became far more than just a popular watering hole. The club broke the colour barrier when it opened, presenting Canada's first all-Black dance band.

Sandwiched between two stately bank buildings, the Colonial stood tall as one of Canada's most famous jazz venues. Opened in 1947 by owner Goodwin (Goody) Lichtenberg, the club showcased such jazz greats as Art Blakey, Carmen McRae, Miles Davis and Thelonious Monk during the 1950s and 1960s. In the 1970s, it began adding blues legends like Muddy Waters and Willie Dixon to its lineups. When Howlin' Wolf performed there, future Canadian music star Colin Linden, then an aspiring 11-year-old guitarist, spent several instructive hours with the elder bluesman.

Although the Colonial also briefly featured rock and punk music, its formative years as a bastion for jazz were the club's heyday. Cy McLean and his Rhythm Rompers were popular during the Swing Era of the 1940s. But because McLean, a pianist from Sydney, Nova Scotia, and his Rompers were all black, they were restricted from playing white venues in Toronto and southern Ontario. That changed in 1947 when the Colonial booked them to perform. Cy McLean and his Rhythm Rompers made history, forever changing Toronto's music complexion.