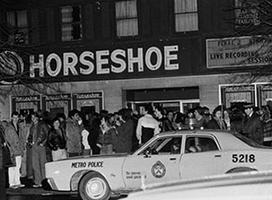 Outside the 1978 punk rock show at the Horseshoe Tavern that came to be known as the Last Pogo. Steven Leckie of the Viletones, among others, performed and the crowd was later kicked out by police (public domain). 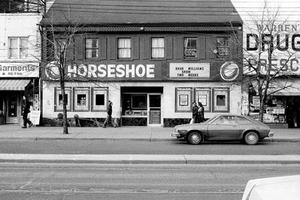 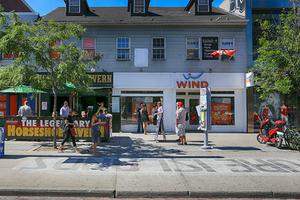 "Punks Against Police at the Horseshoe Tavern"

Originally the country music capital of southern Ontario, the Horseshoe Tavern once played host to Nashville superstars like Willie Nelson, Waylon Jennings and Ian and Sylvia Tyson. With actor Dan Aykroyd as a part owner, it later featured the Blues Brothers and surprise appearances by Bryan Adams and The Tragically Hip. The Shoe will be forever remembered for a night that pitted punks against police in a frenzied riot.

The Horseshoe earned its name from its origin in 1861 as a blacksmith shop. Opened in 1947 by entrepreneur Jack Starr, the club initially had an unsavory reputation owing to the regular patronage of bank robber Edwin Alonzo Boyd. During its country-music heyday, Stompin' Tom Connors performed for 25 consecutive nights, setting an attendance record that still stands. When England's The Police played its first Canadian gig at the club, it became the stuff of urban mythology: thousands claim to have heard the band, when in fact only a handful showed up.

One night at the 'Shoe lives on in infamy. On 1 Dec 1978, promoters Gary Cormier and Gary Topp staged what they called "the last punk show in Toronto," featuring Teenage Head, the Viletones, Cardboard Brains and other bands. Police tried to shut down the show, sparking a riot. The destruction that ensued left the club's tables and chairs shattered, all of it captured on film in a documentary called The Last Pogo. 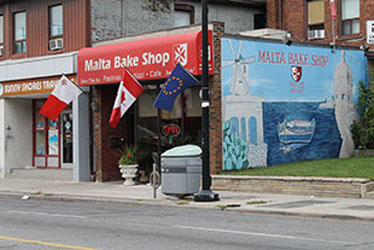