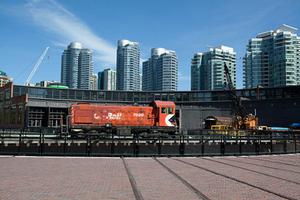 7020's 1000-horsepower engine was the first CPR diesel-electric locomotive to operate in Toronto. Its primary use was to switch railway cars and make up trains in the freight yard (photo 2012 by James Marsh). 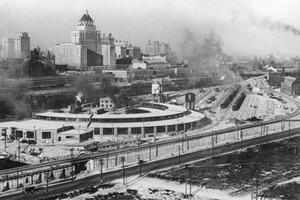 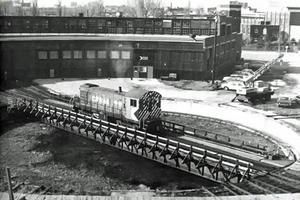 A CP Rail locomotive in the John Street Roundhouse, circa 1983 (public domain).
PreviousNext

In 1943, at the height of the Second World War, the shop crew at the John Street Roundhouse was instructed to provide a thorough inspection and cleaning of Canadian Pacific Railway steam locomotive No 2337. Although they were not aware of it at the time, the crew was preparing the locomotive to haul US President Franklin D. Roosevelt on his top-secret trip to a weeklong fishing vacation on Georgian Bay. The president's train had left Hyde Park, New York, on 31 July and arrived at West Toronto, where the CPR engine would take over, at 5:00 AM on 1 August.

The massive John Street Roundhouse was built by Canadian Pacific in 1929 to service the steam locomotives that hauled more than 40 CPR trains a day into Union Station. A 37-metre rotating turntable was installed to turn around some of the largest and most powerful locomotives ever built in Canada. The railway closed the facility in 1986, and in 1990, John Street Roundhouse was declared a national historic site, being "architecturally and historically important, surviving as a reminder of steam technology and the role of rail transportation in the city of Toronto." The roundhouse is now the home of the Toronto Railway Museum, which opened in 2010.