The Great Library at Osgoode Hall, circa 2012 (photo by James Marsh). 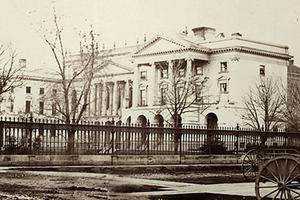 The north side of Osgoode Hall, Queen Street West, circa 1856 (courtesy City of Toronto Archives/Fonds 1498, Item 9). 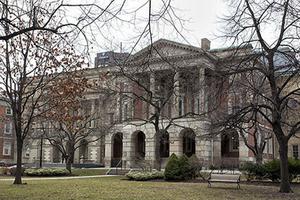 Osgoode Hall is an architectural treasure as well as a National Historic Site. The result of a series of renovations and additions rather than the plan of a single architect, it reflects the growth and development of the legal profession in Ontario as well as changing architectural styles. Until 1957, its law school was the only one accredited in the province.

The original building - the east wing - was designed by early Toronto architect John Ewart and constructed between 1829 and 1832 as the home of the Law Society of Upper Canada. The centre range, designed by William Warren Baldwin, followed immediately. In the mid-1840s, architect Henry Bowyer Lane added the west wing, a new façade and domed roof to the centre range, and a portico to the east wing.

The centre range finally achieved the look it has today with a renovation by architects Frederic Cumberland and Willam Storm, completed by 1859. Cumberland and Storm gave the building much of its detail: the imposing main entrance; the geometric floor of the atrium; the magnificent ceiling of the central hall with its intricate circular ornament; and the Great Library's intricate ceiling, cork floors and fireplace. The great iron fence, erected in 1868, continues to protect Osgoode Hall 's exceptional grounds today. The entire site is a rare, gracious treasure in the dense rush of downtown Toronto.