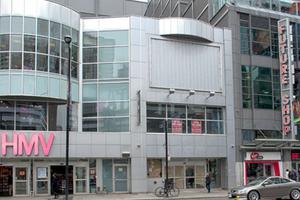 Another music store has opened up in the vicinity of the old Sam the Record Man store, 2012 (photo by James Marsh). 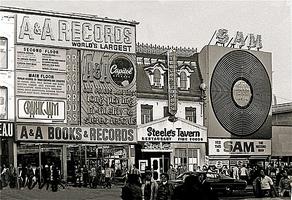 Born in Toronto in 1920, Sam Sniderman started selling records in 1937 in his brother Sidney's College Street store, Sniderman Radio Sales and Service. In 1961, he opened his legendary Yonge Street flagship store, which would help define Toronto's main street until the store's closure in 2007.

Sam Sniderman made his reputation by making sure that he had every conceivable recording available. If someone wanted something he didn't have, he would get it. He also hired many musicians and music aficionados to work in the store. In the 1960s, jazz expert and founder of Coda magazine, John Norris, ran the Yonge Street jazz department and introduced a whole generation of jazz buffs to new music, playing records for hours to avid listeners. He was one of many and this approach created lifelong customer loyalty.

The success of the Yonge Street "Sam the Record Man" led, in 1969, to the establishment of franchises; by the early 1980s there were 140 Sams across Canada. Widespread changes to the music industry brought challenges, however, and the chain survives today in one store in Belleville, Ontario. The Yonge Street store closed in 2007. The iconic giant illuminated records that graced its storefront were declared protected heritage elements by the City of Toronto.

A & M Records of Canada Ltd.