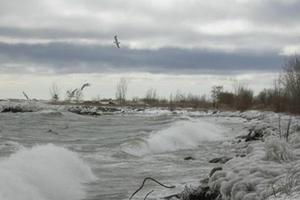 The Leslie Street Spit shoreline in winter (courtesy Friends of the Spit). 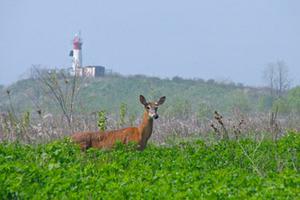 Leslie Street Spit is home to hundreds of species of plants, birds and mammals (courtesy Friends of the Spit). 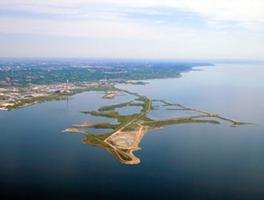 An aerial view of the Leslie Street Spit, circa 2000s (courtesy Friends of the Spit).
PreviousNext

Call it the accidental wilderness. When work began on the Leslie Street Spit in 1959, the Toronto Harbour Commission intended it to serve as a breakwater for anticipated harbour expansion. While the forecasted increase in shipping never happened, the dirt and debris left over from the construction of highrises and subways grew into a five-kilometre long peninsula. By 1973 much of it was turned over to the Toronto and Region Conservation Authority and opened to the public on weekends to explore its steadily growing number of animal and plant species.

Despite proposals to build hotels, marinas, and theme parks along the spit, confusion over its administration and the efforts of advocates such as Friends of the Spit allowed the landscape to become, according to Toronto Star columnist Christopher Hume, "a dump gone wild, an accidental nature preserve...but above all, a huge civic asset." Lakefill operations continue to restrict public use to weekends, when the spit, officially known as Tommy Thompson Park (in honour of Metro Toronto first parks commissioner, who encouraged people to "please walk on the grass") attracts visitors searching for a temporary escape from the concrete of the city.