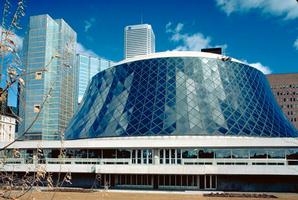 The Toronto Symphony moved into the hall (designed by Arthur Erickson) in 1982 (Corel Professional Photos).

Maestro von Kunits remained its music director until his death in 1931, when Sir Ernest Macmillan became music director for the next 25 years. He was succeeded by Walter Susskind (1956-65), who led the orchestra in its successful Carnegie Hall debut on 3 December 1963. Seiji Ozawa (1965-69) took over as music director at the age of 30. Under his direction the orchestra toured Britain, France and Japan. The distinguished European conductor Karel Ancerl (1969-73) led the orchestra to artistic and financial success and began the popular summer concerts at Ontario Place Forum.

In 1973 Victor Feldbrill took over, in the post of resident conductor, until 1978. In 1974 the Toronto Symphony Youth Orchestra was formed, with Maestro Feldbrill as its first conductor.

Under the direction of Andrew Davis (1975-88), the TSO toured extensively, becoming in 1978 one of the first Canadian groups to enter China after the Cultural Revolution. In September 1982 the orchestra moved to Roy Thomson Hall, where it now performs each year to more than 400 000 patrons. An additional 5 million Canadians tune in to the TSO's frequent concert broadcasts on CBC Radio.

Walter Homburger, the TSO's general manager from 1961 through 1987, was widely regarded as one of Canada's most experienced arts administrators. He replaced J.W. Elton, who had been the orchestra's manager since 1934, having taken over from his father, H.J. Elton.

In 1989 Davis was named conductor laureate and German conductor Gunther Herbig (1989-94) was appointed music director. That year the TSO attained the highest subscription level of any orchestra in the world. Finnish conductor Jukka-Pekka Saraste was appointed music director beginning with the 1994-95 season. Under Maestro Saraste's direction, the TSO performed at Carnegie Hall in 1996 and 1998 (where it had performed annually from 1978 to 1986). At the end of February 2000 it embarked on its first European tour since 1991, performing concerts in Stuttgart, Berlin, Frankfurt, Cologne and Budapest and culminating in a 3-day residency at Vienna's Musikverein - the first such residency ever by a Canadian orchestra. Shortly after returning from the European tour, Maestro Saraste announced his resignation as music director.

In 1995 the TSO appointed Gary Kulesha as its first composer advisor. He assists the music director with the programming and long-term planning of Canadian contemporary programming.

The TSO began recording under MacMillan, and has since recorded extensively for RCA, CBC, CBS Masterworks and Finlandia Records.