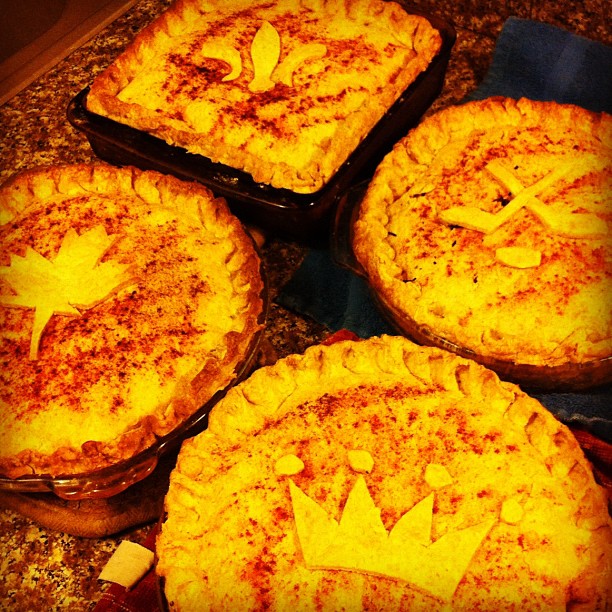 Tourtière is a double-crusted meat pie that is likely named for a shallow pie dish still used for cooking and serving tourtes (pies) in France. The ground or chopped filling usually includes pork, and is sometimes mixed with other meats, including local game, such as rabbit, pheasant or moose. It is famously served as part of réveillon, a traditional feast enjoyed by Catholic Québécois(es) after midnight Mass on Christmas Eve. Tourtière can be a shallow pie that is filled with pork or other meats, or a many-layered pie that is filled with cubed meats and vegetables, which is the way the dish is prepared along the shores of the Saguenay and Lac Saint Jean. (Acadians living in the Maritimes call their version of tourtière by its common name, pâté à viande.)

Several recipes for tourtière were printed in La cuisinière canadienne (1840), likely the first French-language cookbook published in Canada. Pork, mutton, veal, potatoes (which came into use in the colony in the 1770s, by way of the British), and chicken all get their own treatment, simmered and spiced before they are enclosed in a sturdy pastry. Beef appears as the main ingredient in a recipe for Pâtésde Noël, which follows the tourtière recipe and its variations.

Elizabeth Driver, a culinary historian, notes that the meat would have traditionally been cut into small pieces with a knife. Many cooks today use ground meat instead, which “changes the texture and one’s appreciation of the dish,” writes Driver. Nathalie Cooke, editor of What’s To Eat? Entrées in Canadian Food History, suggests that lard would have been the primary fat used in the early days of the colony, when “olive oil was expensive; butter scarce.” A flaky lard crust would probably have been the norm.

Tourtière certainly predates the publication of La cuisinière canadienne, and meat pies have appeared in nearly every culture (e.g., samosas, empanadas, steak and kidney pie). Québec cookbook author Julian Armstrong suggests that its roots may be traced to a 5th-century cookbook that includes “a pie called La Patina that was made in a bronze pot with four layers of pastry, the top crust with a hole in the centre.” Meanwhile, the word tourtecomes from Latin slang: tortus panis,meaning “a round of bread.”

Another creation myth persists in discussions about the dish: that tourtière comes from tourte, which also means pigeon. Passenger pigeons, which went extinct at the end of the 19th century, numbered in the billions at the beginning of the 19th century in North America. They were notoriously easy to catch, especially at their nesting grounds on Île d’Orléans, on the St. Lawrence River, where they were hunted and baked into pie. 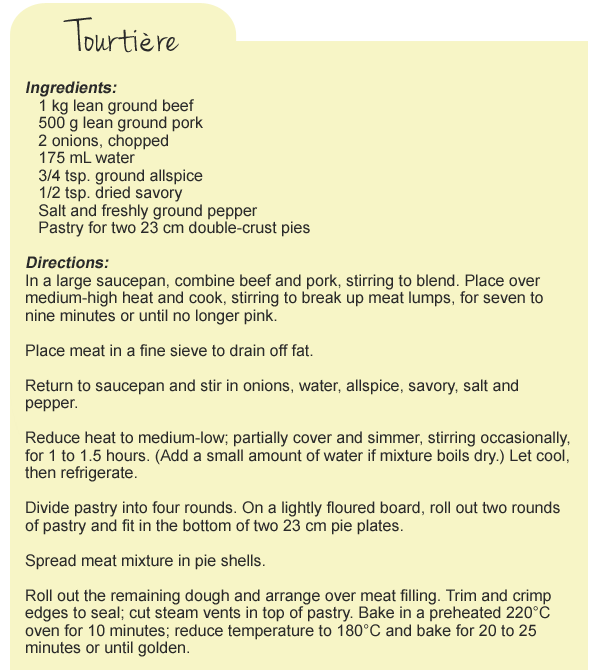