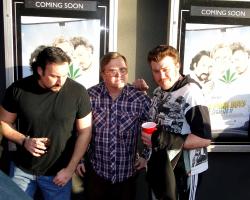 Trailer Park Boys, the most successful comedy series to be broadcast on Canadian cable television, began life as a 90-minute mock documentary about the lives of 2 petty felons living in a Nova Scotia trailer park. Directed by Mike Clattenburg and starring Robb Wells as Ricky and John Paul Tremblay as Julian, with Mike Smith as a soundman on the faux documentary crew, Trailer Park Boys screened at the 1999 Atlantic Film Festival in Halifax. Producer Barrie Dunn saw the film and sold the idea of a series based on the film's dodgy gang of foulmouthed but lovable losers to the cable network Showcase.

Previously Clattenburg had directed episodes of the CBC's popular Street Cents and the short-lived series Pit Pony, and a number of shorts, including the 10-minute Cart Boy in 1995, featuring Wells, Tremblay and Smith, and the 30-minute Nan's Taxi, which won a Gemini Award for best short dramatic program. In 2000, Clattenburg formed Trailer Park Productions with Dunn, and the first six 30-minute episodes went on air in 2001.

Neither Wells nor Tremblay, childhood friends who grew up in Dartmouth, had formal acting training and Smith, who was raised in Thorburn, NS, began his career as a guitarist for the East Coast band Sandbox. He was also freelancing as a location soundman, which is how he came to work on (and appear in) the original documentary.

The character Julian is the non-designated leader of the group, the "brains" of the outfit, who is always dreaming up get-rich-quick schemes with the idea of retiring at age 35. He is forever carrying a glass of rum and coke in one hand, and sometimes a firearm in the other. Ricky is Julian's dim-bulb best friend who lives in his beat-up Chrysler New Yorker and enjoys copious amounts of marijuana and alcohol. Bubbles (played by Smith), with his distinctive coke-bottle glasses, is sweet-natured, loves stray cats and is Julian and Ricky's conscience. Although introduced last into the mix, he became the most popular of the Sunnyvale Trailer Park's motley crew. Each season begins with the boys being released from prison.

The series ran over 7 seasons (2001-08) and spun off 2 features, Trailer Park Boys: The Movie (2006) and Trailer Park Boys: Countdown to Liquor Day (2009) as well as 2 television specials, The Trailer Park Boys Christmas Special (2004) and Say Goodnight to the Bad Guys (2008). It won 2 Gemini Awards, in 2004 for best comedy program or series, and in 2005 for best ensemble performance in a comedy program or series, and received 3 other nominations. In 2003 Mike Smith was given the Viewer's Choice Award for favourite comedian.

Much has been made of the popularity of the Boys, and comparisons have been made to the surreal antics of Monty Python's Flying Circus, the Kids in the Hall or Bob and Doug McKenzie. In truth, the trio is closer to the comedy of The Three Stooges than the Marx Brothers. Their humour is outrageous and often laced with expletives. The conceit was that the boys were being filmed all the time by a hidden documentary crew, which gave the series a strong sense of being "real." On occasion the boys would address the camera directly and involve the crew in their shenanigans.

The series developed a large and loyal fan base that found it often hilarious, sometimes shockingly vulgar but served up with a sweetness of spirit. Guest stars included Alex Lifeson of the rock band Rush, Rita MacNeil, and Denny Doherty, formerly the lead singer with The Mamas and the Papas. The actors who played Ricky, Bubbles and Julian toured in character with the bands Our Lady Peace and Guns N' Roses and appeared in the music videos of The Tragically Hip. In 2009, the trio toured live in the Ricky and Julian and Bubbles Community Service Variety Show, and again in 2010 with The Ricky, Julian and Bubbles, Drunk, High and Unemployed Tour.