The Trans Mountain Expansion is a project to build about 980 km of new pipe, most of which will run parallel to the existing Trans Mountain oil pipeline. The new line will carry diluted bitumen, or “dilbit,” from Edmonton, Alberta to Burnaby, British Columbia. The expansion will increase the pipeline route’s overall capacity from 300,000 barrels per day to 890,000 barrels per day. The project’s first owner, Kinder Morgan Canada, sold it to the Government of Canada in 2018. The Trans Mountain Expansion has been a focus of environmental and economic debates, as well as political conflicts. The $12.6 billion project is now under construction. 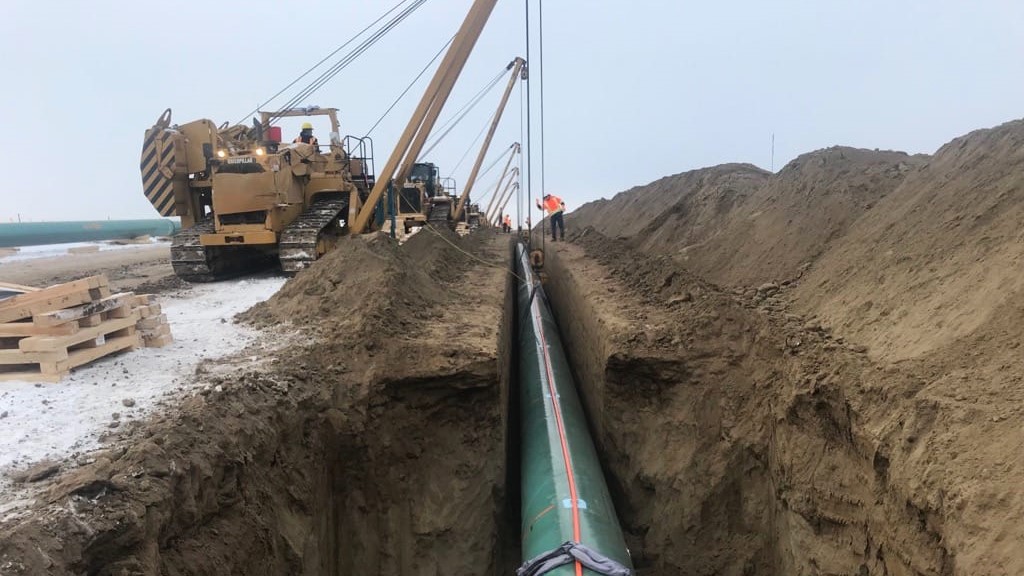 A crew lays pipe for a section of the Trans Mountain Expansion Project in the Greater Edmonton area.

The Canadian unit of oil and gas company Kinder Morgan first proposed the Trans Mountain Expansion in 2012. The Trans Mountain pipeline was built in 1953, and Kinder Morgan Canada had owned it since 2005. The company pushed for an expansion of the existing pipeline as part of a broader effort to ship more of Canada’s oil to the Asia-Pacific region through its terminal in Burrard Inlet, Burnaby. Kinder Morgan argued that Canada would gain an additional $3.7 billion each year from shipping greater quantities of oil across the Pacific Ocean (compared to selling it in the United States).

In 2014, dozens of protesters were arrested on Burnaby Mountain for trying to block survey work. In 2016, aiming to restore public trust in the environmental review process, the federal government appointed a panel to assess the project. This step was separate from the National Energy Board’s review. The government approved the project in 2016. 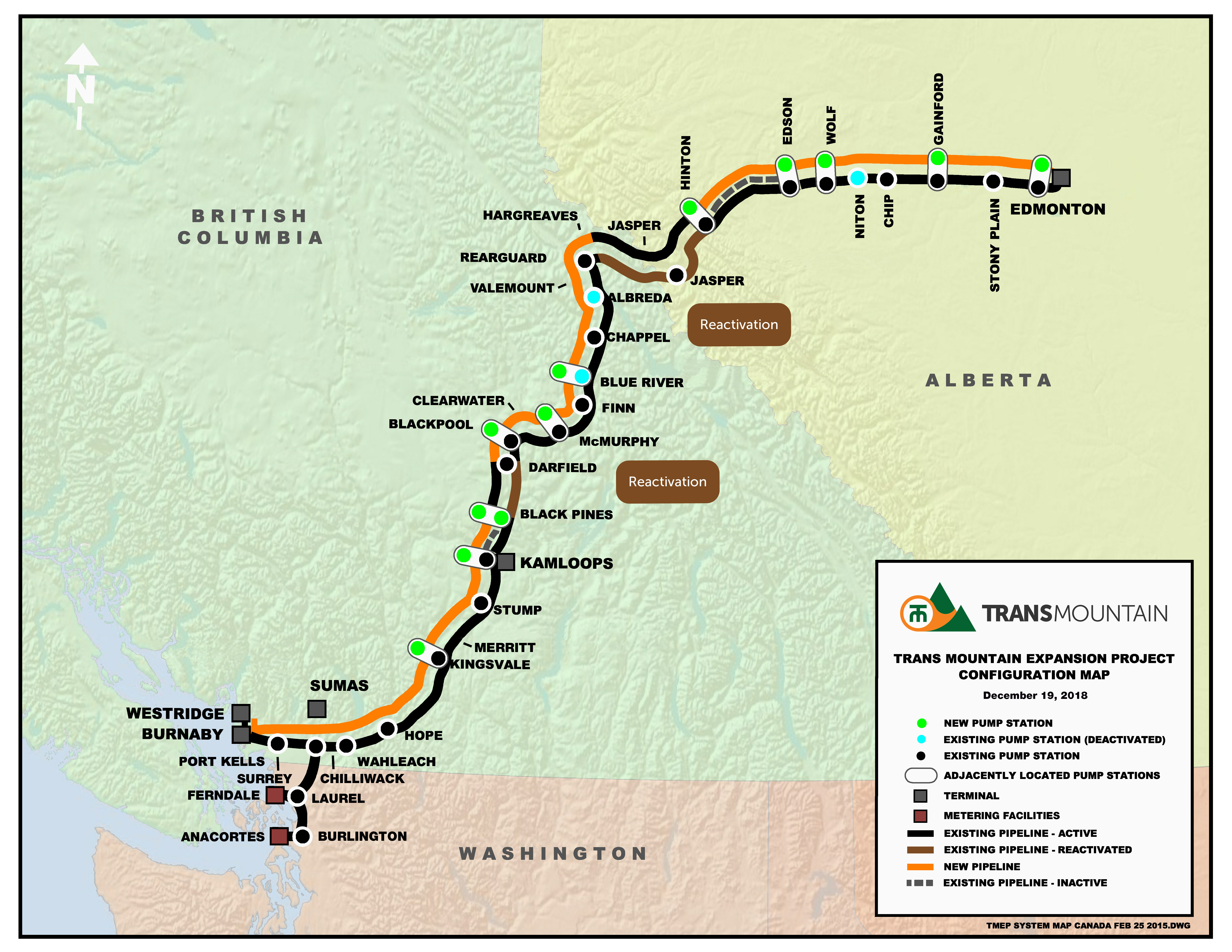 The orange line represents the new pipeline; the existing route is in black and brown.

In early 2018, a trade dispute broke out between BC and Alberta over the project. British Columbia’s NDP government under ​John Horgan had proposed a ban on increased shipments of bitumen from Alberta to the West Coast. This was to be a temporary ban while BC sought further consultation on the risks of oil spills. Alberta NDP premier Rachel Notley called the ban unconstitutional and said it broke trade rules. She also pushed back by pausing the import of BC wine to her province. The feud escalated into the spring. Alberta passed a bill that threatened to cut off existing oil exports to BC. British Columbia responded with a lawsuit.

Did you know?
Police arrested more than 150 anti-pipeline activists in March 2018 during protests at Kinder Morgan Canada facilities in Burnaby. Those arrested included Green Party leader Elizabeth May and NDP MP Kennedy Stewart. (An order from the BC Supreme Court barred protesters from approaching within 5 m of construction zones at two Burnaby terminals owned by the company.)


Kinder suggested that it would abandon the Trans Mountain Expansion if it did not receive “clarity on the path forward” by 31 May 2018. The company was seeking assurances for its shareholders. Prime Minister Justin Trudeau interrupted a trip abroad for an emergency meeting with Horgan and Notley. Trudeau was under mounting pressure from Canadian business leaders to get the pipeline built. At this time, the federal government promised to pay back money Kinder had lost due to construction delays. 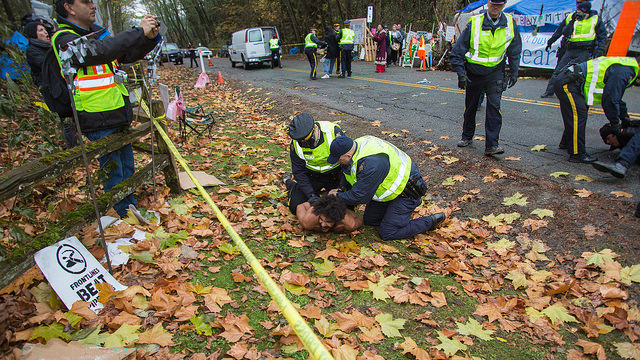 Police arrest a protester at a rally against the Trans Mountain Expansion in Burnaby Mountain Park, 20 November 2014.

Purchase by the Canadian Government

The standoff between BC and Alberta continued as Kinder Morgan Canada’s deadline neared. Two days before the deadline, the federal government announced that it would buy the existing pipeline for $4.5 billion. It also said it would seek new investors to complete the expansion project. Rachel Notley and some business leaders celebrated the decision. However, politicians across the political spectrum said it was a misuse of tax dollars. Some opponents also thought the deal was a failure to assure investors and solve the project’s political problems. Others saw it as a betrayal of the Liberals’ commitments to environmental action and Indigenous rights.

Six First Nations, the City of Vancouver, the City of Burnaby and two environmental groups challenged the project’s 2016 approval in court. In August 2018, the Federal Court of Appeal ruled on these lawsuits. The court found that the federal government had failed in its duty to “engage in a considered, meaningful two-way dialogue” with First Nations. It also concluded that the National Energy Board (NEB) had no right to exclude marine shipping from its definition of the project. This meant that the NEB had failed to consider its duties under the Species At Risk Act. The court said that the NEB had to propose ways to lessen the impact of oil-tanker traffic on endangered killer whales. The court’s ruling cancelled the federal government’s approval of the expansion. It meant that the government would have to redo parts of the consultation and approval process.

The day after the Federal Court of Appeal released its decision, Kinder Morgan Canada finished selling the pipeline and expansion to the government. 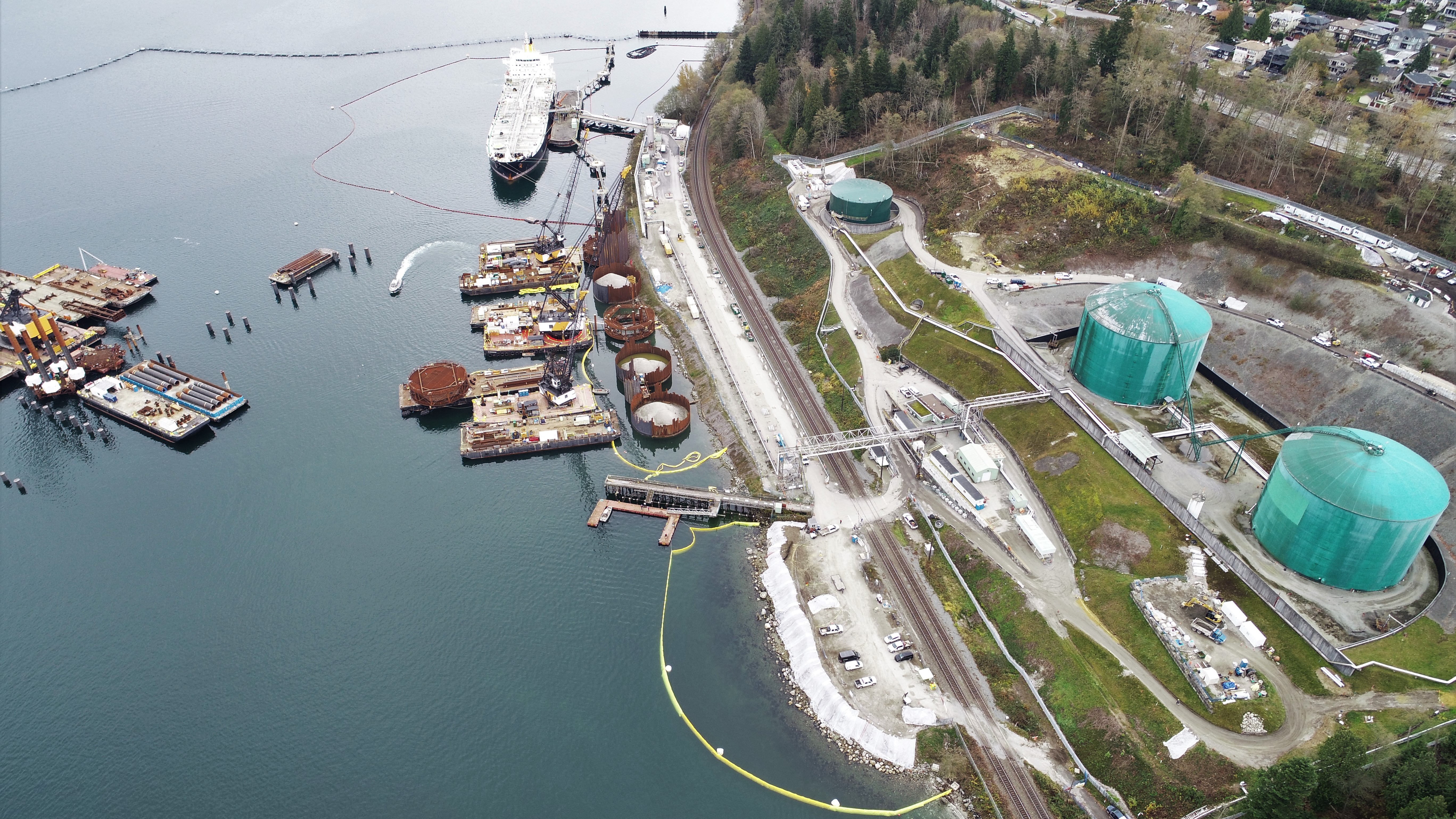 In February 2019, the NEB released a new report on the expansion project. This was the reassessment that the Federal Court of Appeal had ordered the previous year. The NEB once again recommended that the project be approved. It concluded that the expanded pipeline was in the national interest. The NEB made 16 new recommendations to the government. These concerned measures to “mitigate, avoid, or lessen the effects of Project-related marine shipping.”

Prime Minister Trudeau’s Cabinet approved the expansion for the second time in June 2019.

The government intends to sell the project, and it has specifically encouraged Indigenous investors. Construction resumed in August 2019 and is now underway at terminals, pump stations and sections of the pipeline’s route in Alberta and British Columbia.

Thick, dark mixtures of hydrocarbons sourced in the earth or in the process of refining petroleum.

Bitumen that has been diluted with lighter types of petroleum so that it will flow through pipelines. 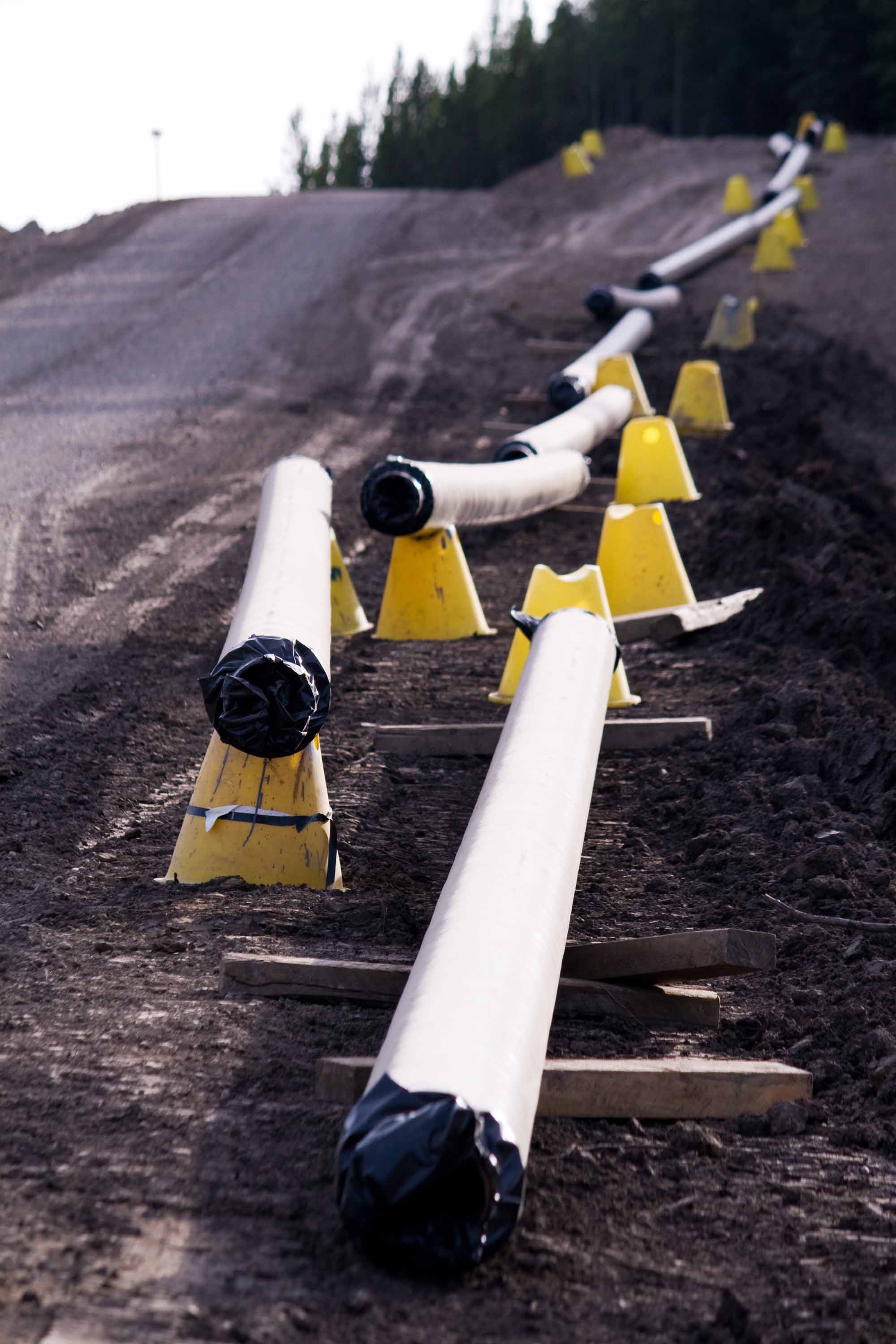 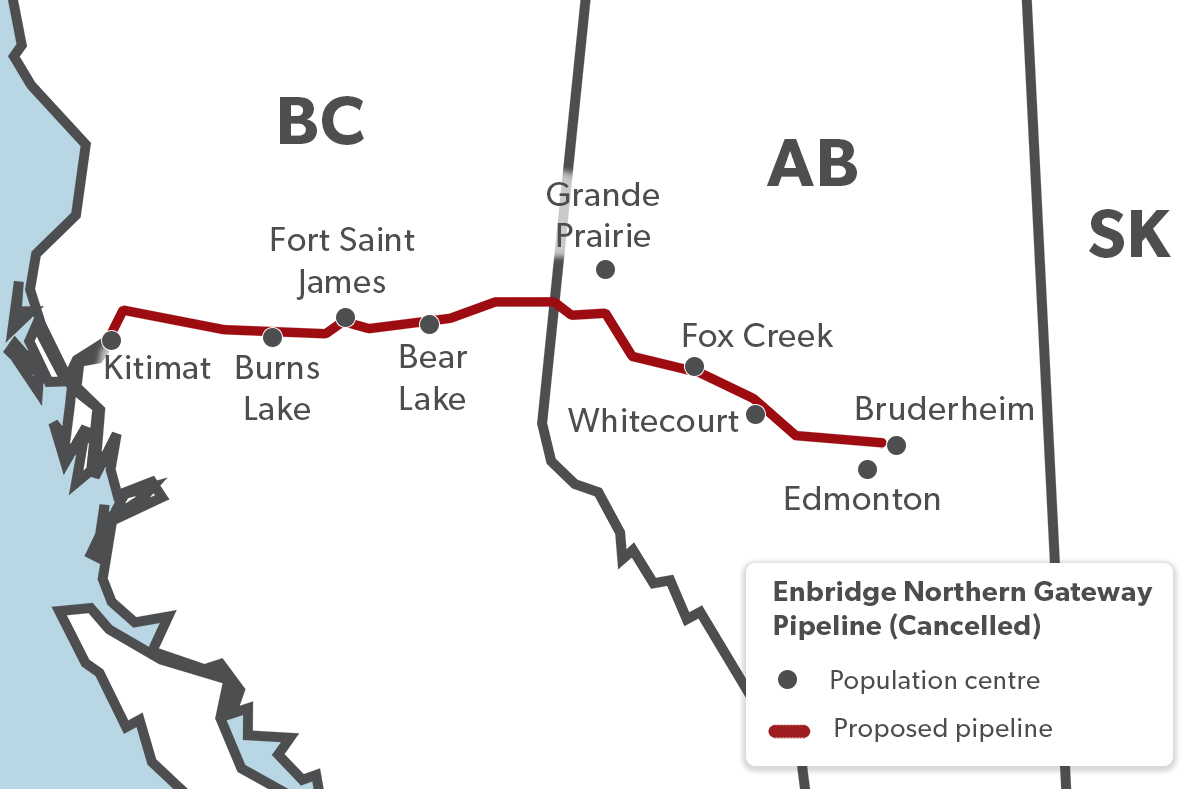 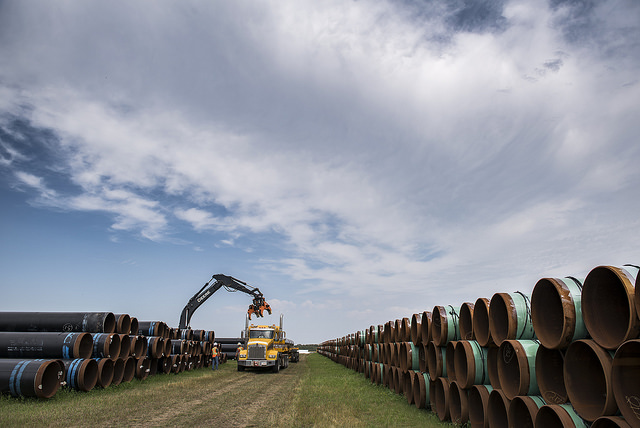 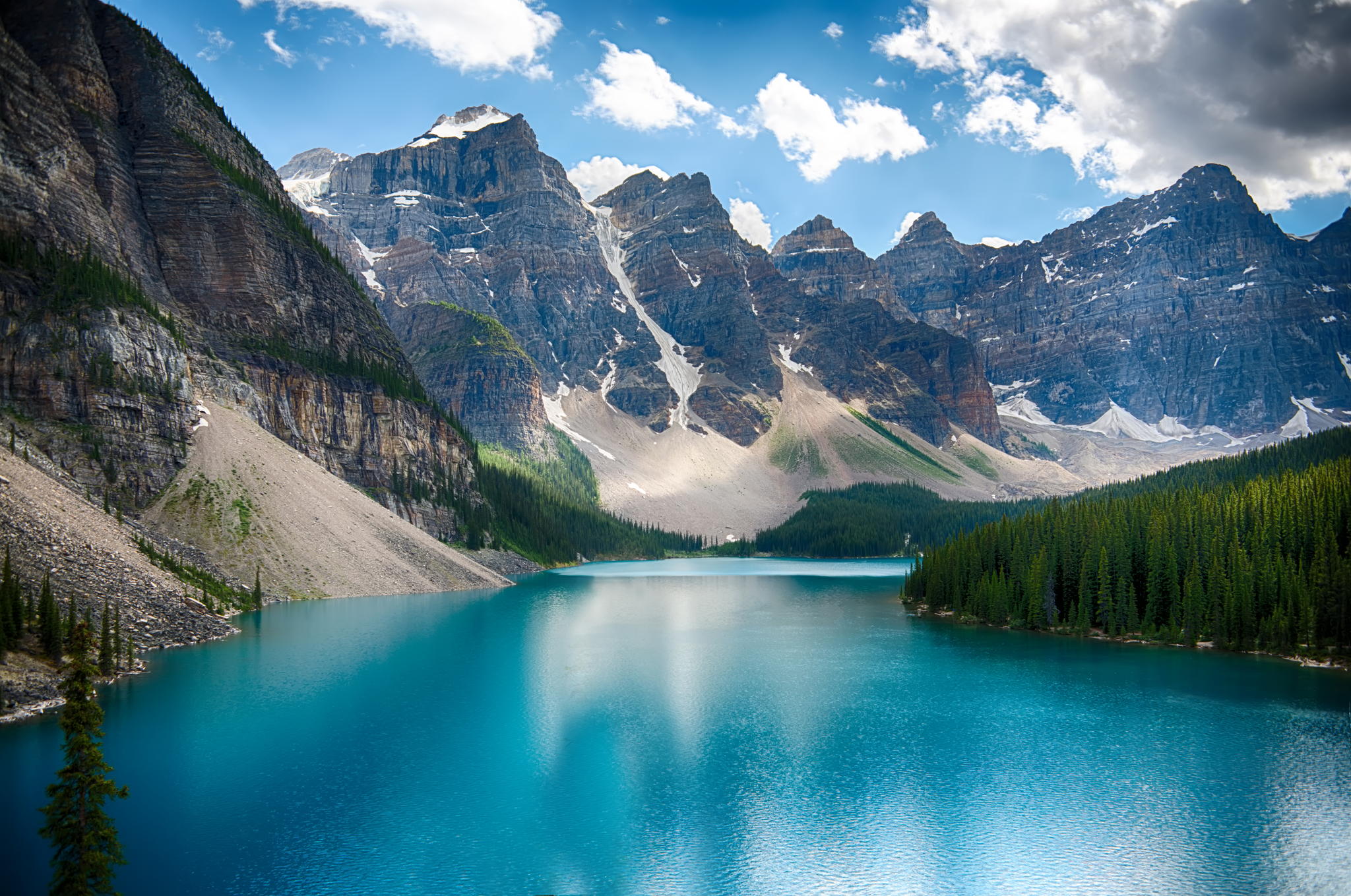