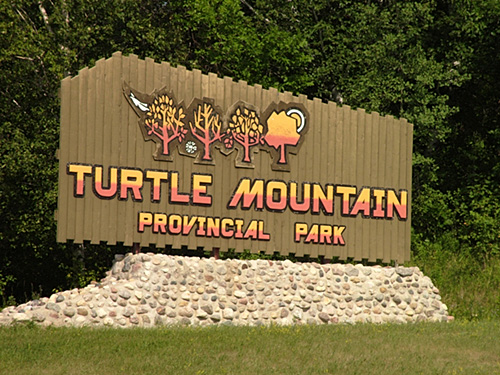 Turtle Mountain rises about 245 m above the surrounding prairie as an oasis of rich forests. The majority of the some 200 or so bodies of water are shallow and provide the ideal high-nutrient habitat for turtles and fish. Some smaller water holes are home to migrating waterfowl. Isolated islands in the park have some of the largest oak trees in Manitoba. The trees are lone survivors of fires that raged through the area at the turn of the century. Turtle Mountain is home for moose, deer, elk and many other species of wildlife.

This region is the oldest inhabited part of the province, since it was the first dry land after the last Ice Age. Coniferous forests quickly became established, and waterfowl, mammoth and perhaps giant bison attracted small groups of nomadic hunters. A handful of scattered stone tools remains to tell of their presence.

Between 1810 and 1870, Métis came from Red River colony for annual hunting trips. In later years, as the herds diminished, some of the hunters wintered here rather than repeating the long journey the following year. Many set up homesteads after the hunting way of life disappeared.

Oskar, Max and James lakes linked by portages are the park's canoe route through the backcountry. Fishing is popular on stocked and unstocked lakes. There is an extensive trail system for mountain biking, hiking and horseback riding. There are also orienteering and interpretive trails, and an interpretive centre at Adam Lake. Two campgrounds with beaches, playgrounds and picnic shelters are located at Adam and Max lakes.