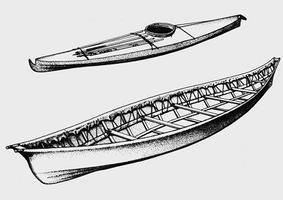 The kayak is a narrow hunting boat made of sealskin stretched over a wood or bone frame. The larger umiak was used for transporting goods and people (artwork by Gordon Miller).
PreviousNext

Nunavimiut, or Ungava Inuit, live along the shores of Ungava Bay, on the south shore of Hudson Strait and on the eastern coast of Hudson Bay. They utilize the resources of the vast area north of the treeline, especially sea mammals in the coastal waters, inland they hunt caribou and at times penetrate the traditional Cree and Innu lands south of the treeline.

The term Ungava, meaning "towards the open water," was used to designate the Inuit band established at the mouth of the Arnaud (Payne) River. The Moravian Brothers, who established missions among Labrador Inuit, called the Inuit lands located to the west "Ungava"; the Hudson's Bay Company used the name widely in the 19th century, and the federal government then created the federal district of Ungava in 1895. Ungava Bay, a large, U-shaped body of water along the north coast of Québec is the traditional territory of the Nunavimiut. The Ungava Peninsula is approximately 350 000 square kilometres surrounding Ungava Bay. The Inuit in this area had no generic terms for themselves.

Culturally close to the Inuit southeast of Baffin Island and to the Labrador Inuit, they nevertheless differ from these communities in a number of linguistic and technological respects and in their social and religious customs. The distinctions have been accentuated by the acculturation and evolution of these Inuit as a result of the administrative division of their lands.

The Inuit of the northern part of Ungava from Cape Smith to Killiniq Islands hunted large sea mammals (arctic whale, walrus, belugas, bearded seals), had good transportation (Umiak, kayak, dog teams), and lived in large, warm igloos built of snow; they had access to all coastal and inland resources; those in the southern reaches of Ungava lived on fish and small marine or land mammals. Archaeological remains and their oral history show that some bands lived permanently on the shores of the larger inland lakes (eg, Payne, Klotz and Nantais lakes) or on the coastal islands and archipelagos (Ottawa, Sleeper, Mansel and Nottingham Islands).

Among the first Inuit in Canada to establish permanent contacts with Europeans, the Ungava were also the first to take charge of the administration and management of their development through Inuit Co-operatives and the James Bay Agreement; they also became renowned for the fine quality and abundance of their contemporary art (see Inuit art). Though influenced by a strong Shaman tradition, many Inuit were Christianized by Wesleyan, Anglican and later Roman Catholic missionaries. A number of syncretic and messianic movements also marked their development.

During the 1970s a dissident political movement opposed to the James Bay Agreement grew in the northwestern Ungava region.

Today, some Nunavimiut refer to themselves a Inuit Kapaimiut, meaning "people of Québec." Two writers, Mitiarjuk de Kangirsujuaq (Wakeham Bay), author of the novel Sanaaq, and Thomassie Qumak of Povungnituk, author of an encyclopedia and an Inuit dictionary, have been instrumental in spreading Inuit culture through the written word.