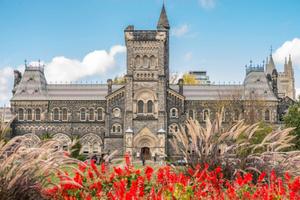 University College, U of Toronto (architects Frederic W. Cumberland and William G. Storm, 1856-59), picturesque in its variety of silhouettes, colours, textures and carved details, eclectic in its rich amalgam of Norman, Romanesque, Anglo-French and Venetian forms, epitomizes the flamboyance and strength of the high-Victorian Gothic style. The architects, aided by their amateur colleague Governor General Sir Edmund Head, drew inspiration from the work of the Irish firm of Deane and Woodward, especially the contemporary Oxford University Museum. The erection of this vast college building 1856-59 signalled the achievement of a major 19th-century aspiration for a nondenominational institution of higher learning supported by government.