It is a common characteristic of human nature to be morbidly intrigued by disasters, to gawk and wonder and replay an incident over and over in whatever medium is available to us. The Titanic disaster is impossible not to run into these days (April 2012), with the centennial of the disaster upon us. It is commemorated in James Cameron's 3D re-release of his blockbuster movie, in museum exhibits, in a four-part television mini-series, a veritable forest of books and even a series of stamps from Canada Post.

There are enough facets to the story of the Titanic and its sinking on 15 April 1912 to feed our obsession for a great many generations, perhaps even to the time when the wreck, which lies southeast of Newfoundland, is consumed by rust and becomes nothing more than an undecipherable part of the seabed. The story of the Titanic is also the story of Edwardian society, of the inequality between classes, the extent and limits of technology, of hubris, greed, corruption and sacrifice. It has all the elements of a great piece of drama.

In its time, the Titanic was the largest moving object in the world that had been crafted by human hands. It was the length of four city blocks, built with leading-edge technology. The hull was made of iron plates an inch (2.5 cm) thick, held together with 1200 tons of rivets. The ship was divided into 16 compartments by 15 transverse watertight bulkheads. Twelve watertight doors separated the compartments, and could be operated manually and remotely from the bridge. Twenty-nine boilers and 159 furnaces had to be fed a steady stream of coal to keep the ship's dynamos and steam engines running. Some have suggested that it was the hand of God that put the iceberg in the path of the Titanic, as punishment for human hubris. Others consider overwhelming confidence in the ship's technology one of the factors in the poor decisions made on the night the ship sank-ignoring the warnings of heavy ice and sailing at top speed to maintain the schedule, relying on the naked eye instead of issuing binoculars to the lookouts, and continuing to steam ahead after the collision, allowing water to rush with greater velocity through the gash in the ship's side.

Much has been written and declared about the band that played on as the ship went down, but less attention has been paid to the engineering staff who stayed at their posts below decks to keep the lights and the electric winches operating, to help passengers escape. The 700 survivors owed their lives to those men. The engineers, like the men in the band, were stoic members of Edwardian society; the mores of their time demanded noble sacrifice and honour. Or, at least, the appearance of those qualities. That Joseph Ismay, chairman of the White Star Line, after helping several women and children into a lifeboat, took for himself the final seat that may otherwise have remained vacant, was a shocking display of selfishness. It was an act that Ismay would regret for the rest of his life. The shame was so great that he could never have lived it down, no matter what he did in the future. He became a recluse, resigned his chairmanship, avoided public functions, and refused to speak of the Titanic ever again after testifying at the inquest. Ismay's ignoble act was surely only one of many that night, as people wrestled with duty and the instinct for self-preservation.

The ship's sinking has spawned considerable myth, including the popular notion that it had been advertised as unsinkable. In fact, its designation as the "unsinkable Titanic  came later, after the disaster, when Philip Franklin, an executive of the White Star Line's holding company, said on hearing of the sinking, "I thought her unsinkable, and I based my opinion on the best expert advice. But the media grasped the idea and reported that the Titanic had been touted previously as unsinkable, though in truth it had been reported in trade magazines as "practically unsinkable. Similarly, the "unsinkable Molly Brown, Margaret Tobin Brown of Hannibal, Missouri, gained her Titanic nickname only after her death. She was reputed to have rowed her life boat for seven and a half hours to deliver herself and other passengers to safety. She was a practiced rower and did help row her lifeboat to the Carpathia, which arrived at the scene more than three hours after the Titanic disappeared, but the story of her heroic exploit is almost certainly another Titanic legend.

Our seemingly unquenchable obsession with the Titanic, and the mythology that surrounds the ship, began in 1912 as Edwardian society created a triumph from the tragedy with its tales of heroic service and duty, with the captain who went down with his ship, and with a band that played on to calm and encourage passengers as they faced, and met, a horrible death. 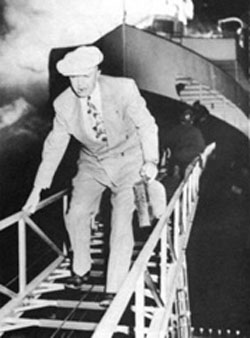