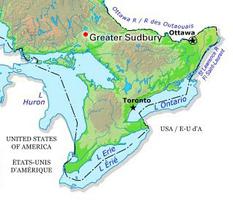 Valley East, Ont, urban area, population 20 676 (2011c), 19 655 (2006c). Valley East was incorporated as a town in 1973 and later as a city in 1998 but is now part of the city of GREATER SUDBURY (incorporated in 2001). The new city of Greater Sudbury is composed of the former municipalities of the Regional Municipality of Sudbury, which included Valley East, the towns of Capreol, Onaping Falls, RAYSIDE-BALFOUR, Walden and Nickel Centre, and the city of Sudbury. Valley East's name is descriptive: the town is located in a valley east of the Nickel Basin.

Valley East was formed by the amalgamation of 3 agricultural and rural townships: Hanmer (founded in 1904), Capreol and Blezard (both founded in 1906). Capreol was annexed to Hanmer in 1967 and Hanmer and Blezard amalgamated in 1969 to form the township of Valley East. The town of Valley East was created 4 years later. It is primarily a residential community of Greater Sudbury and nearly one half of the population is French-speaking.