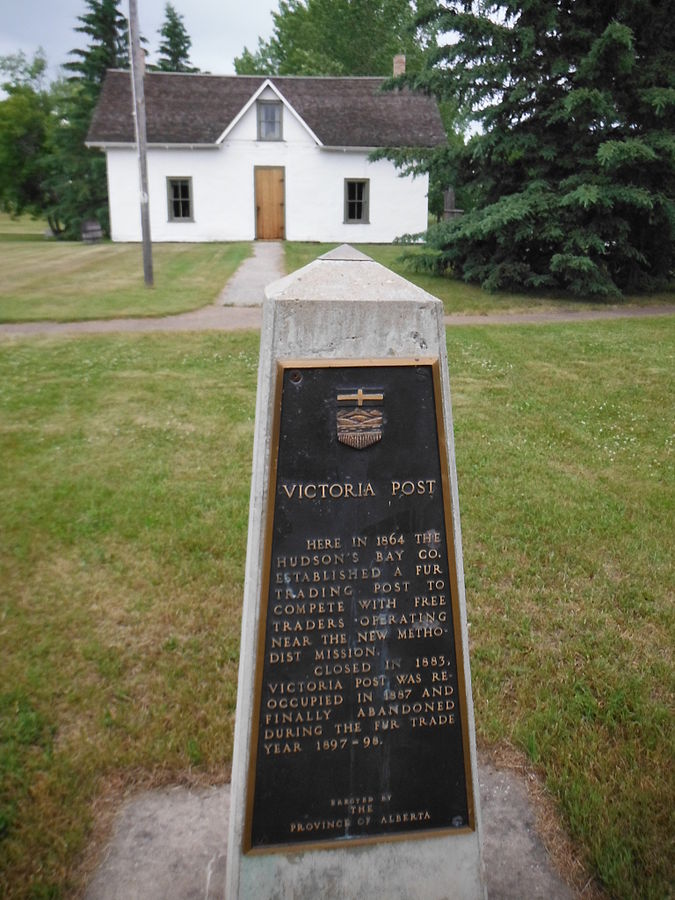 Photo of the clerks quarters and the Provincial cairn at Fort Victoria Historic Site, Alberta, Canada. This is a cultural heritage site in Canada, number 5759 in the Canadian Register of Historic Places.

Victoria Settlement, 15 km south of Smoky Lake, Alta, was first established in 1862 by the Reverend George McDougall as a Methodist mission. Situated on the North Saskatchewan River, McDougall initially hoped to attract the local Cree to the mission, but soon the settlement also included many English-speaking Métis. Most were of mixed English or Scottish and Cree backgrounds, and Victoria's location allowed them to balance bison hunting with some subsistence farming. The settlement developed as a river-lot community, with the same distinctive narrow parcels of land stretching back from the river as were found at the Red River Colony.

In 1864 the Hudson's Bay Company opened a post at Victoria to serve the local population. The population continued to grow slowly, and by 1887 a small townsite began to develop around the HBC post and McDougall's church. When a post office opened, the community was named Pakan after a local Cree chief. Pakan served as a steamboat and ferry landing and as a stopping place on the Victoria Trail, which ran along the north bank of the river from Edmonton. Although the community received a new influx of settlers after 1900 when a number of Ukrainians took up homesteads in the area, Pakan entered a long period of decline in 1918 when the railway went through the nearby community of Smoky Lake.

Today the Victoria Settlement Provincial Historic Site includes a clerk's residence built by the HBC in 1864 and the 1906 Pakan Methodist Church. The site is open to the public from mid-May to early September.