To a casual observer, the key battles of World War II were fought on land. Normandy, Stalingrad, El Alamein and others come to mind. Yet many historians believe that the key to the Allied victory was the war at sea, in particular the Battle of the Atlantic. Without the Atlantic lifeline, the United Kingdom would have lacked the weapons, fuel, food and reinforcements to survive. If Britain fell there would be no means for a re-conquest of Europe.

Canada played a significant role in this naval struggle. At the heart of this contribution was a fleet of unassuming escort vessels known as corvettes. The U-Boat proved a devastating weapon in the First World War and it was clear that they would again be a serious threat in the Second. National Defence had neither the foresight nor the resources before 1939 to build destroyers, the large, fast, well-armed vessels that were in the frontline in anti-submarine warfare. Instead they focused on a small patrol vessel to be used primarily for coastal defence. These smaller ships could be built in Canada and would need only small crews.

The envisaged vessel was based on a design for a coastal whaling ship. They would not be ideal, but they would be cheap and easy to build. Winston Churchill dubbed them "cheap and nasties. They became known as "corvettes (a naval term for a small warship dating back to the 18th century). The first contract called for 28 to be built by 12 shipyards from Atlantic Canada to BC. The volunteers recruited were not considered part of the permanent navy and wore a distinctive wavy stripe.

Corvettes were seaworthy but unpleasant. Their rounded bottom made them bobble like a cork. Sailors said of them that they would roll on wet grass. They were armed with 40 depth charges and a 4-inch (100mm) gun on the foredeck. They were soon needed, as the German U-Boats were sinking millions of tonnes of shipping in the North Atlantic. They even raided in Canadian offshore waters, right into the St Lawrence. The Allied response was to gather ships in convoys and protect these groups with escort vessels and aircraft, a system proven in the First World War. The first Canadian corvettes to sail were the HMCS (His Majesty's Canadian Ship) Windflower and Trillium, which left for England December 6, 1940-with fake wooden guns!

To find a submerged enemy, the corvettes used a technology called ASDIC (better known as SONAR). ASDIC sent out a sound waves at regular intervals under water. When it reached an object, the wave rebounded, enabling the operator to calculate the distance. The corvettes Chambly and Moose Jaw were the first corvettes to sink a U-Boat (U-501), on September 10, 1941.

After the Allies successfully landed in North Africa, Canadian corvettes became part of an escort effort to ensure that land forces were resupplied. Among these was the Ville de Quebec, built in Quebec City and commissioned 24 May 1942. On January 13, 1943, Ville de Quebec was escorting a 15-ship convoy in the Mediterranean when ASDIC operator Stanley Mill reported a submarine presence on the starboard bow. It was U-224. This submarine had been built in Kiel, Germany, and was commissioned on 20 June 1942. The U-boat had slipped through the narrow strait at Gibraltar, when clouds hid the moonlight. It had been sighted in that dangerous passage but escaped attack.

The Ville de Quebec attacked immediately, firing a pattern of 10 depth charges in a diamond pattern, damaging the U-Boat to the degree that it had to surface. The corvette's guns opened fire keeping the Germans from manning their deck gun. The captain ordered the ship to ram the submarine. The crew reported hearing "a grinding noise on our hull and then a loud explosion to our stern. U-224 went down and exploded underwater. There was only one survivor, First Lieutenant Wolf- Dietrich Danckworth. The convoy ships blew their whistles in tribute.

The sinking was widely publicized. The Ville de Quebec was visited by admirals and dignitaries, including Vice-Admiral Lord Louis Mountbatten and back in England by the King and Queen. The corvette's captain T/Lt.Cdr. A.R.E. Coleman of Montreal received the DSO.

After the war the Ville de Quebec was decommissioned 6 July 1945, sold into mercantile service in 1946 and renamed Dispina. Its honoured name is still carried on one of Canada's patrol frigates today. One former corvette, HMCS (Her Majesty's Canadian Ship) Sackville was saved from the wrecker's yard and restored as a floating tribute to all the ships and men who had served. HMCS Sackville is now moored dockside in Halifax Harbour, in the bright white and blue dazzle camouflage paint scheme she once wore in the North Atlantic. 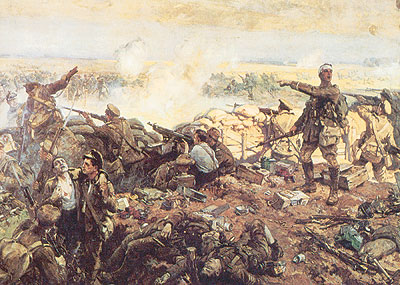