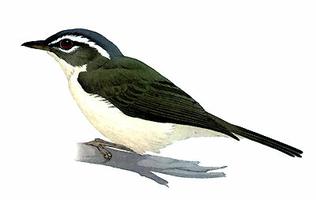 The vireo (Vireonidae) is a family of small, basically olive green, insectivorous and partly frugivorous songbirds with repetitive, persistent songs (sometimes musical, often harsh). The 52 known species, restricted to the New World, are related to the cosmopolitan shrike and crow.