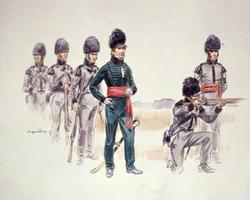 As war loomed in the spring of 1812, Britain began to raise its military strength in North America. Most colonial forces raised to fight the Americans were English, Irish and Scottish in origin. But French Canada also served, and distinctly. On 15 April, Lieutenant General Sir George PREVOST, governor of British North America and commander of its armed forces, raised a Provincial Corps of Light Infantry in Lower Canada known as the Voltigeurs de Québec. The Voltigeurs were full-time professional soldiers, and their numbers and pay came from the province of Lower Canada. They were not part of the regular British Army, and had a distinctly "Canadian" pedigree.

Their commander was Major Charles-Michel de SALABERRY, formerly of the 60th (Royal American) Regiment of Foot. His family had a well regarded reputation for serving the British Army, and he had served with the British against the French in the West Indies and at Walcheren. He wrote effective books on rifle drill, had fought a duel in which he sliced his rival almost in half and had a reputation as a brutal task-master among both his men and his officers. De Salaberry was one of the most experienced officers in British service during the War of 1812.

The Voltigeurs were officered by well-to-do members of Québec society, many related to de Salaberry, though all were treated to his fierce discipline and high standards. Commissions went to the captains and lieutenants who could fill their ranks (36 for captains, 16 for lieutenants). Despite jingoist propaganda to the contrary, the Voltigeurs had reached just over half of their 538 authorized ranks. At war's start, FENCIBLE units would be added to their numbers for support and strength.

The Voltigeurs were initially assigned to defend the EASTERN TOWNSHIPS. In November, they faced American Major General DEARBORN and his 6000-strong force, who invaded the region from Plattsburgh. De Salaberry rushed with his forces and some First Nations allies to staunch the invasion at LACOLLE. While they could not halt the invasion, days of skirmishing increased the cost and Dearborn retreated days later. The spring of 1813 saw the splitting of Voltigeur units, some of whom bolstered the defences at KINGSTON and others who participated in the failed assault on SACKETS HARBOR. But the Voltigeurs are best known for their service at the BATTLE OF CHÂTEAUGUAY and the BATTLE OF CRYSLER'S FARM.

In the fall of 1813, American strategy focused on cutting off the St. Lawrence to isolate British forces in Upper Canada, followed by a decisive attack on Montréal. The first move was by Major-General Wade Hampton, who took 4000 men from the Lake Champlain region up the Châteauguay. His goal was to cut the St. Lawrence and meet up with General Wilkinson's forces coming down the river from Sackets Harbor. Hampton was not keen on the venture or on the quality of his men, and moved slowly. De Salaberry had excellent intelligence on Hampton's movements, ordered various obstacles to be constructed to complicate the American advance, and with his forces (Voltigeurs and militia), and supported by the troops of Lieutenant-Colonel George MacDonell (Canadian born himself), led his all-Canadian force against the Americans. While primarily a series of skirmishes, the Battle of Châteauguay was a very "Canadian" victory.

During the Battle of Crysler's Farm, 3 companies of the Voltigeurs served under Lieutenant-Colonel Morrison to help deflect Wilkinson's 1800-strong rearguard, sent to repulse Morrison's forces. On 11 November, the Voltigeurs were stretched across Morrison's skirmish line and were heavily wounded. The Americans advanced past them, but were routed by Morrison's mixed force.

After the war, the Voltigeurs underwent a variety of changes to their designation, but the unit found service in a series of conflicts, including as part of the 57th Battalion of the CANADIAN EXPEDITIONARY FORCE in the First World War, and as part of the Canadian Active Service Force in the Second World War.