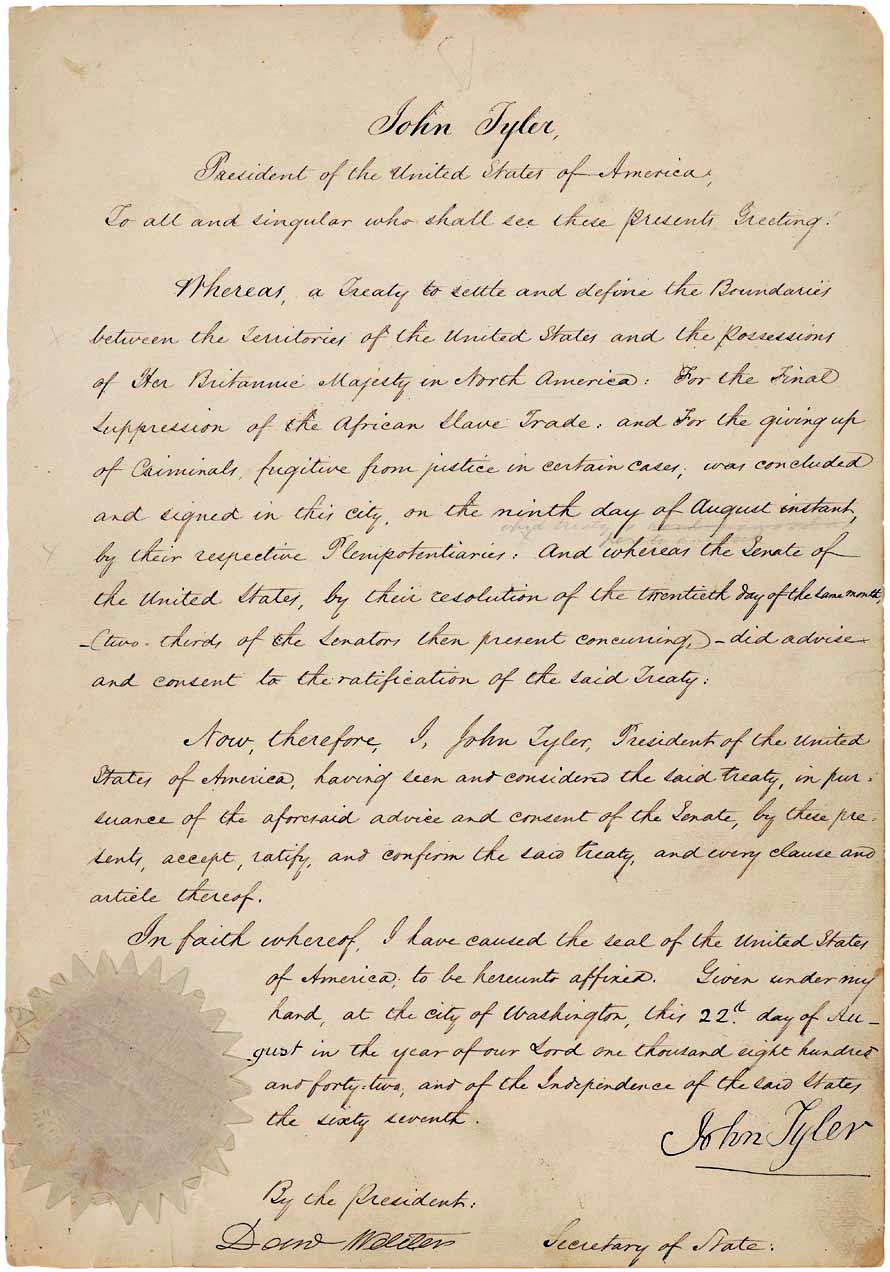 A plaque commemorating the Webster-Ashburton Treaty at the site of the old State Department building in Washington, D.C. where the signing occurred.\r\n
PreviousNext

The Webster-Ashburton Treaty, signed 9 August 1842, was negotiated by US Secretary of State Daniel Webster and Alexander Baring, First Lord Ashburton, for Britain. While the Treaty of Ghent ended the War of 1812 in December 1814, it did not resolve all the problems of the conflict. Indeed, issues like territorial boundaries, some of which had been unsettled even before the war, still needed amending. In 1842, Britain and the US signed the Webster-Ashburton Treaty to settle the disputed borders between New Brunswick and Maine and in the Great Lakes area.

The Treaty of Paris (1783) had only vaguely defined the northeastern borders of the newly created United States, and its ambiguity led to disputes. In 1816, the Americans began building an octagonal fortification on Lake Champlain as a means to deny the British forces in Canada the approach they took in the Battle of Plattsburgh. After a visit by President James Madison, and backed up by a more accurate survey, it was discovered that the fort had erroneously been built on Canadian soil, and a kilometre too far north. Upon verification, all construction ceased and the site was abandoned, leading to its nickname of "Fort Blunder." Similar disputes about territorial boundaries existed in the west, primarily around Lake Superior and Lake of the Woods.

By 1838, tension over the Maine-New Brunswick border rose. Conflicts between different ethnicities, business interests and arrests of supposed foreign agitators in areas of dispute, led to a confrontation known as the Aroostook War. No actual war broke out, and very limited fighting occurred, but troops and tensions were raised by both sides. These and other events forced the British and Americans back to the negotiating table to hash out a treaty that would clearly and definitively establish common and accepted boundaries, and avoid another call to arms like that in 1812.

Daniel Webster and Alexander Baring, First Baron of Ashburton, met in 1842, and the treaty that bears their names not only settled the disputed boundary, but also established a series of agreements on US/British relations. Most substantially, the boundaries of Maine and New Brunswick were finally agreed to, with the US receiving roughly 18 000 square kilometres of the disputed territory and Great Britain, 13 000 square kilometres.

Criminal issues were also discussed. The "arrests" of foreigners on American or British soil had been a problem during the Aroostook War, and Webster and Ashburton established clear guidelines for the extradition of fugitives in each other's nation, though a formal extradition treaty would occur later. Connected to the issues of fugitives was the growing and controversial topic of slavery. The US agreed to station ships off the African coast as part of a joint Anglo-American effort to suppress the slave trade.

The Webster-Ashburton Treaty signalled an improvement in Anglo-American relations since the end of hostilities in 1814. Many on both sides remembered the bitterness of the War of 1812, and the hostilities at Aroostook had the potential to plunge each nation into another unpopular war. Instead, London and Washington chose diplomacy to settle their affairs, and largely successfully. In the wake of the treaty, the greatest bitterness that remained was that of the Aboriginal inhabitants of the region who had lived in the disputed region and now had to deal with which side of the demarcation to call home, and the hardship of not having their voices heard during the negotiations.

Despite the concessions of large territory, the treaty was also unpopular in the US. In an attempt to make the shifting borders more palatable, Webster produced a map he claimed Benjamin Franklin had made of the region back in the eighteenth century. Franklin's map had sketched out boundaries that Franklin thought appropriate and Webster noted that Franklin's map coincided with the boundaries he had negotiated for the US. This posthumous endorsement of the treaty by a Founding Father of the United States helped the agreement to be ratified by the Senate, though some believe it was a forgery.