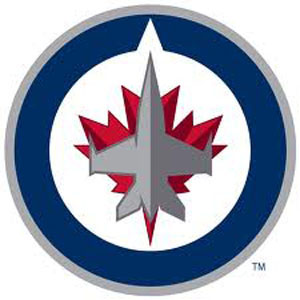 Winnipeg was also home to the Winnipeg Falcons team, which represented Canada at the 1920 Olympic Games in Belgium. The Falcons were originally composed of players of Icelandic heritage who were excluded from local hockey teams. Starting in a second-tier league, they worked their way up until they were the finest team in not only the city but also the entire country. After winning the 1920 Allan Cup as the top amateur team in Canada, they went on to represent Canada in the first Olympic Games to include ice hockey. The Falcons were undefeated in the Olympics, beating Czechoslovakia, the United States and Sweden to claim the gold medal.

In 1932, another Winnipeg team represented Canada at the Olympics. The Winnipeg Hockey Club (also known as the Winnipegs) retained most of their local players for the Olympic Games, with two extra players selected by the Canadian Olympic Association to bolster the roster. The competition was stiff in 1932, despite only four teams competing, but the Canadian squad made Winnipeg proud by winning another gold medal.

Yet another Winnipeg squad represented Canada on the world stage in 1935, this time at the IIHF Ice Hockey World Championship in Davos, Switzerland. The Winnipeg Monarchs finished the tournament with six wins and one tie, beating Switzerland in the final game to win gold. 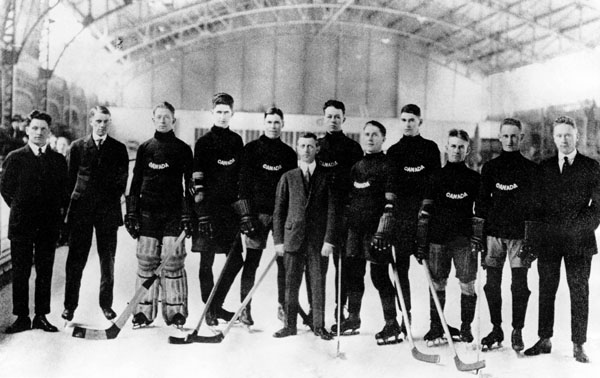 Despite being a small market, Winnipeg’s rich hockey history and passion for the game made it an attractive option for a professional hockey franchise. In 1972, the Winnipeg Jets became the city’s first professional hockey team, part of the World Hockey Association (WHA) that had been formed as a rival to the National Hockey League (NHL). The Jets brought instant credibility to the league by signing NHL superstar Bobby Hull in their first year. At the time, Hull’s multi-million-dollar deal was the most lucrative contract ever given to a North American professional athlete.

The Jets also pioneered the importation of European hockey players to North America, beginning with the 1974 acquisition of Swedish stars Anders Hedberg and Ulf Nilsson. The line of Hedberg, Nilsson and Hull proved to be the most dynamic one in the league, combining for an impressive 156 goals in 1974–75. The Jets were the most successful team in the WHA, winning three of the seven WHA championships, including the final one in 1979 against Wayne Gretzky and the Edmonton Oilers.

In 1979, following the collapse of the WHA, the Winnipeg Jets entered the NHL’s Smythe Division. Under majority owner and president Michael Gobuty, the team’s home base, the Winnipeg Arena, was expanded to 15,250 seats. However, the team suffered due to the conditions of their entry into the NHL, which required them to give up a number of their top scorers in a reclamation draft. The Jets won only 29 games in their first two NHL campaigns, including an abysmal season in 1980–81 that saw them finish with only 32 points.

However, the team rallied under coach Tom Watt for a second-place division finish in 1981–82. The drafting of Dale Hawerchuk in 1981 gave the Jets their first offensive superstar in the NHL, but he was not enough to bring the Jets success. Their best season was 1984–85, when they finished fourth overall in the league with 96 points (it was also the finest offensive season of Hawerchuk’s career, with 53 goals and 130 points).

The Jets never advanced beyond their division in the playoffs, partly because of the toughness of the Smythe Division, which contained both the Edmonton Oilers and the Calgary Flames. In 1985 and 1987, the Jets advanced to the division finals by defeating the Calgary Flames — the only two series wins in Winnipeg history — but they were subsequently swept by the Edmonton Oilers in both years. While the Jets had defeated the Oilers in the WHA playoffs, their fortunes were reversed in the NHL. From 1983 to 1990, the Oilers dominated the Jets, eliminating them from the playoffs six times.

The Jets’ 1987 playoff victory against the Flames was the scene of the first “Winnipeg White-Out,” where fans dressed in white for playoff games to counter Calgary’s “C of Red.” The White-Out has remained a Winnipeg Jets playoff tradition ever since, even after the team relocated to Arizona in 1996.

As the playoff drought continued, losses grew and fears mounted of the sale of the team to American interests. In 1991, the team found new local ownership, including a sizable investment by the province that promised to keep the team in Winnipeg. However, the Jets continued to struggle.

In 1992–93, Jets rookie Teemu Selanne (the “Finnish Flash”) shattered NHL rookie records by scoring 76 goals and 132 points. Along with Hawerchuk, Selanne is one of two Jets to win the Calder Memorial Trophy as best rookie in the league. Despite Selanne’s contributions, the Jets were again unable to advance in the playoffs, losing in the first round to the Vancouver Canucks.

The spate of NHL expansion in the early 1990s led the Jets to be shifted to the Central Division in the Western Conference for 1993–94. Unfortunately for the Jets, the new Central Division also contained one of the strongest teams of the mid-1990s: the Detroit Red Wings. In the 1993–94 and 1994–95 seasons, the Jets failed to qualify for the playoffs. Although they made the playoffs in the 1995–96 season, they were defeated in the first round by the Detroit Red Wings.

The 1990s were a difficult time to make small market teams viable, particularly compared to large market teams like Detroit. The lack of a modern arena, a falling Canadian dollar and rising operating costs and player salaries conspired to bankrupt the ownership group and, amid a half-negotiated deal to sell and move the Jets to Minneapolis in 1995, a frantic public campaign to save the team was mounted. Although three levels of government agreed to build a new arena, a new ownership group — formed in May 1995 — was unable to raise the team’s share of the money. The club was sold to American interests and, on 1 July 1996, officially changed its name to the Phoenix Coyotes.

In 2011, the Winnipeg Jets returned to Winnipeg, to the delight of fans who bought out 13,000 season tickets in 17 minutes when they went on sale on 4 June. On 31 May, True North Sports & Entertainment Limited announced its signing of an agreement to purchase the Atlanta Thrashers and to relocate the franchise to Winnipeg. The NHL Board of Governors approved the move on 21 June. True North did not purchase the Thrashers name and decided to resurrect the Jets name instead. The decision to bring back the Jets name was announced just before their first pick in the 2011 NHL draft.

Before relocating to Winnipeg, the Thrashers had performed poorly as an expansion franchise in Atlanta. In 11 seasons, the Thrashers only made the playoffs once, where they were swept by the New York Rangers in the opening round. Game attendance was poor in Atlanta by the end, and the owners were often criticized for their lack of commitment — the Thrashers had the lowest payroll in the league in four of their final five seasons.

In Winnipeg, the new Jets faced even higher scrutiny, playing in front of fans and media who were passionate about hockey and had no intention of letting this version of the Jets franchise slip away. Having lost their team once, Jets fans were determined to prove that they want NHL hockey in their city.

The Jets failed to make the playoffs in their first three seasons in Winnipeg. However, in 2014–15, they finished the regular season with 99 points – good enough for eighth place in the conference and a playoff series against the top-ranked Anaheim Ducks. For the first NHL playoff hockey in the city in 19 years, Winnipeg fans proudly revived the White-Out. Winnipeg lost the series 4–0, despite holding a lead in every game.

Over the next two seasons, the Jets failed to qualify for the playoffs. Some consolation came in 2016, when the 25th-ranked Jets won second place in the NHL Draft Lottery. This enabled them to pick second instead of sixthin the 2016 NHL Draft. Winnipeg chose Finnish sniper Patrik Laine, who scored 36 goals in his rookie season (2016–17) and 44 goals in his second season (2017–18) in the league.

In 2017–18, Winnipeg made the playoffs again, following a dominant season in which they amassed 114 points and became the highest scoring team in the Western Conference and second-highest in the league. Imposing, fast and skilled, they were led on defence by Dustin Byfuglien, along with Jacob Trouba and Tyler Myers, and on offence by Laine, Blake Wheeler, Mark Scheifele and Nikolaj Ehlers. Goaltender Connor Hellebuyck posted a 44-win season, a single-season record for an American goalie in the NHL. In the playoffs, the Jets defeated the Minnesota Wild in five games in the opening round. In the second round, Winnipeg faced the Nashville Predators, the only team to finish ahead of them in the regular season. The Jets won the series in a hard-fought seven-game series. In the Western Conference Final, though, they lost in five games to the Vegas Golden Knights.

The Jets are now based out of the Canada Life Centre (formerly the MTS Centre) in Winnipeg. The arena is also the home of the AHL’s Manitoba Moose. With a seating capacity of about 15,015 fans, it is the second-smallest arena in the NHL behind the Arizona Coyotes’ Mullett Arena at Arizona State University, which seats 5,000.

The new Winnipeg Jets paid homage to Winnipeg’s air force history with their logo, which features the silhouette of a fighter jet superimposed on the Royal Canadian Air Force (RCAF) roundel — a blue circle with a white centre within which is a red maple leaf. 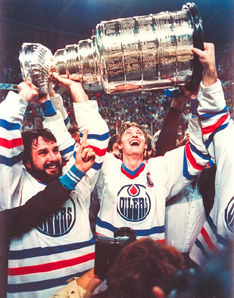 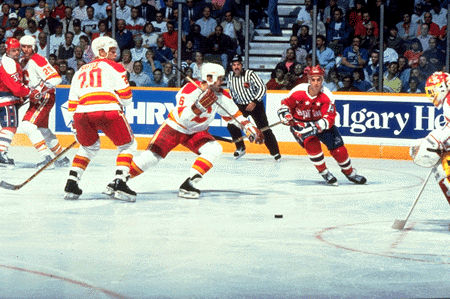 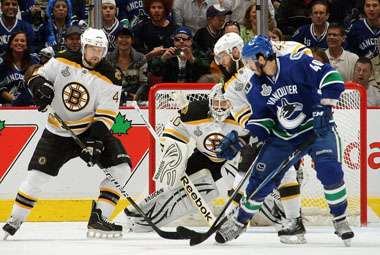 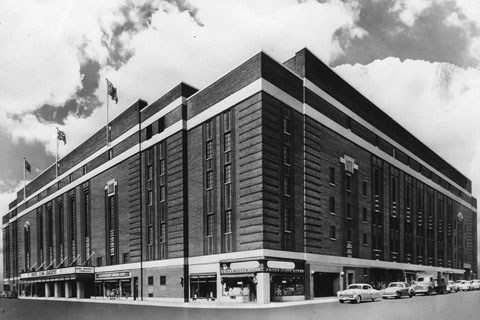