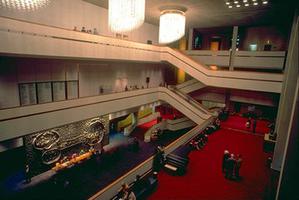 In 1944, with the prospects for a symphony orchestra for Winnipeg enhanced by the CBC's plans for a regular broadcasting orchestra, the Winnipeg Civic Music League was organized. The league established a joint stock company, Winnipeg Symphony Orchestra Ltd. Walter Kaufmann in 1948 became the first conductor, and the 73-piece orchestra's debut concert (16 Dec 1948 at the old Winnipeg Auditorium) included two of the conductor's compositions. After the initial season of five concerts, 10 performances were presented each year, some with outstanding soloists. CBC radio began in 1949 to broadcast many concerts. Programming centred on basic repertoire; pop and children's concerts were regular fare by the orchestra's eighth season.

After a period of guest conductors from early 1957 to mid-1958, Victor Feldbrill succeeded Kaufmann as conductor and persuaded the board to establish in the orchestra a nucleus of some 45 players on a 26-week-per-year contract. This, together with an increase in size, led during Feldbrill's 10-year tenure to the organization's status as one of Canada's full-time symphony orchestras. During the same period the orchestra became known for the regular inclusion of Canadian works in its programs. Feldbrill conducted or programmed works of Murray Adaskin, Violet Archer, John Beckwith, Lorne Betts, Sophie-Carmen Eckhardt-Gramatté, Harry Freedman, Lionel Greenberg, Dirk Keetbaas, Sir Ernest MacMillan, Leslie Mann, Roger Matton, Pierre Mercure, Oskar Morawetz, François Morel, Bernard Naylor, Jean Papineau-Couture, Barbara Pentland, Clermont Pépin, Godfrey Ridout, Norman Sherman, Harry Somers, Norman Symonds, Robert Turner, John Weinzweig, and Healey Willan. Among these were several premieres: Pentland's Symphony No. 4 (1960); Sherman's Sinfonia Concertante for Bassoon and Strings (1961); Naylor's Variations for Small Orchestra (1961); Eckhardt-Gramatté's Symphony-Concerto for Piano and Orchestra (1961); and Lionel Greenberg's Prelude and Fugue (1965).

The Winnipeg Symphony Orchestra moved to the Manitoba Centennial Concert Hall in 1968, playing its first concert there at the hall's inaugural ceremonies 27 March. George (Wolfgang) Cleve (b Vienna ca 1937, US-trained and previously an assistant to George Szell in Cleveland) succeeded Feldbrill and during his stay, 1968-70, the orchestra assumed control of the Winnipeg Philharmonic Choir (which it maintained until 1982), and also gave the premiere of Victor Davies'Celebrations for Orchestra. The Italian conductor-pianist and former child prodigy Piero Gamba (b Rome 16 Sep 1936) was appointed music director in 1971, and Ruben Gurevich became Gamba's assistant in 1973. Gamba had conducted in 40 countries, was honorary director of nine orchestras and had recorded with several, and was a winner (1962) of the Arnold Bax Memorial Medal. He was noted for his adroit handling of orchestral accompaniments, and appeared frequently as his own soloist, conducting a concerto from the keyboard.

By the mid-1970s the orchestra of 80 under Gamba's direction was giving annually 12 pairs of subscription concerts, 3 or 4 pop concerts, and over 25 children's concerts, and the liaison with the Philharmonic Choir was yielding performances of Bach's Mass in B Minor, Beethoven's Missa solemnis and Ninth Symphony, and Stravinsky's Symphony of Psalms. Gamba programmed premieres of Eckhardt-Gramatté's Symphony No. 2: Manitoba (1970, with subsequent performances on the orchestra's first eastern-Canadian tour); George Fiala's Ukrainian Violin Concerto (1974), and Arthur Polson's Concerto for Trumpet and Orchestra (1978).

Short tours were undertaken frequently, to other Manitoba centres and nearby US cities, and in the spring of 1978 the orchestra visited six Ontario cities. In March 1979, to mark the 15th anniversary of the Symphonicum Europae organization, of which Gamba was president, the orchestra gave a gala concert in Carnegie Hall, New York, assisted by a number of noted performers.

Gamba resigned in 1980 after a year during which the orchestra's financial situation - a reported accumulated deficit of $900,000 - drew much public comment. Guest conductors, including Mario Bernardi, Boris Brott, Feldbrill and Ermanno Florio, were subsequently engaged and Franz-Paul Decker was interim artistic advisor. Later that year, the board of directors resigned and the province appointed interim trustees who ran the organization until a new volunteer board was established in 1981.

Kazuhiro Koizumi (b Kyoto, Japan 6 Oct 1949) was music director of the Winnipeg Symphony Orchestra 1983-9. He had trained in Tokyo and Berlin, was assistant conductor under Seiji Ozawa of the Japan Philharmonic 1970-2 and music director of the New Japan Philharmonic 1975-80. Under Koizumi the Winnipeg Symphony Orchestra excelled in performing late-Romantic works and regularly presented major works for chorus and orchestra, including Mahler's Symphony No. 2, Bach's Christmas Oratorio, and Fauré's Requiem. In 1981 it began publishing Overture, its house program, and established a concert series in Brandon. Musically Speaking, a series with pre-concert talks, was introduced in 1982. During this time, overall subscription sales increased, putting the financial struggles of the early decade firmly behind the organization.

Bramwell Tovey (b Essex, England, 1953; B MUS (London) 1975, ARAM 1990, hon LLD (Winnipeg) 1993), became in 1989 the orchestra's first artistic (rather than music) director. A pianist and composer, Tovey had been music director of the Scottish Ballet 1978-82, was principal conductor for Sadler's Wells Royal Ballet 1984-8 and artistic director 1987-90 of the London D'Oyly Carte Opera Company. By September 1989, the time of his appointment to the Winnipeg Symphony Orchestra, Tovey had conducted all the major British orchestras. With the Winnipeg Symphony he performed many Canadian works and programmed major 20th-century works such as Britten's War Requiem (with the Winnipeg Philharmonic Choir, Mennonite Oratorio Choir, and The Winnipeg Singers); and Stravinsky's Rite of Spring (the Winnipeg Symphony premiere, 18 May 1990). He conducted Gershwin's Rhapsody in Blue from the piano in February 1990. The orchestra continued its long-established practice of featuring orchestra members as soloists from time to time.

The 1989-90 season had a main subscription series of 12 concerts in addition to other series eg recitals and children's concerts. In 1991, the orchestra had 67 core players. CBC Radio recorded 11 concerts, many for national broadcast, in the 1990-1 season.

In 1990 the Winnipeg Symphony Orchestra appointed Glenn Buhr as its first composer-in-residence, in a program funded by the Canada Council and the Manitoba Arts Council. Buhr and Tovey proved a highly effective match, ushering in - with Max Tapper - the Winnipeg New Music Festival in 1992. (This important festival remains the largest new music festival in Canada, and also gave the orchestra and Tovey a strong international profile.)

Despite the success of the Winnipeg New Music Festival and Winnipeg Symphony recordings of this period, financial difficulties surfaced again in the late 1990s. Several poorly attended seasons, a failed 1999 Manitoba government stabilization strategy, and heightening tensions between Tovey and the orchestra's management resulted in Tovey's departure for the Vancouver Symphony Orchestra in 2000 and a month-long lockout of the musicians in December and January 2001-2. Conducting duties were for a time shared between conductor-in-residence Michael Hall and US conductor-violinist Joseph Silverstein. Prior to this, the orchestra had hired Russian conductor Andrey Boreyko (b St. Petersburg, 22 Jul 1957), who took the helm 2001-6 and, despite the difficult circumstances, steered the orchestra on a consistent artistic course during his tenure, a period which saw musicians' salaries cut 15 per cent.

The financial woes of the orchestra came again to a head in 2003, much as they did in 1980, with the resignation of the entire board of directors. Facing a $3 million deficit, an interim committee launched a fund-raising drive that generated $750,000, completing a deal with the provincial and federal governments, which absorbed the rest of the deficit. Trials, however, still plagued the Winnipeg Symphony Orchestra, which continued to hover near deficit. Boreyko also resigned in 2006. The orchestra's fortunes decisively turned for the better starting that year, with two important hirings. Dr. Dale Lonis, director of the University of Manitoba's School of Music, was appointed executive director of the Winnipeg Symphony. In his short term of office (2006-8), Lonis proved an effective manager. Not only did he balance the orchestra's budget and bring it to surplus, he increased revenues by over $1 million and saw the orchestra set a record 11 sold-out concerts in one season. The second major hiring was that of the young German-born conductor, Alexander Mickelthwate. Mickelthwate and the orchestra have enjoyed a good working relationship, resulting in two nominations for Western Canada Music Awards in 2008. In conjunction with composer-in-residence Vincent Ho, Mickelthwate added a youthful spin on the New Music Festival, involving more elements of improvisation and eclectic musical styles.

In 2008 the orchestra maintained 67 core players and had a main subscription series of 12 concerts, a 6-concert series in Brandon, a 21-concert pops series, and Musically Speaking and Sundays with the Family series of five concerts each.

The Winnipeg Symphony Orchestra members are the nucleus of the city's classical musical life, and its innovative programming animates local support for the orchestra. Under Tovey and the composers-in-residence, the Winnipeg New Music Festival has premiered over 250 new works by Canadian and international composers, which were later broadcast on CBC.

Davies The Beginning and End of the World. Players of the Winnipeg SO, Skitch Henderson conductor. 1972. OMNI 1001