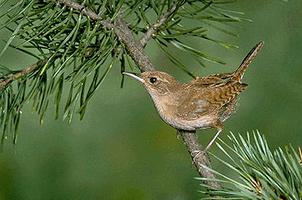 The wren is a family (Troglodytidae) of small, mainly brown, insectivorous songbirds, characterized by chunky bodies, tails that are often erect, and forceful rather than musical songs. The winter wren's (Troglodytes troglodytes) song is one of the longest (5-6 sec) and highest-pitched among Canadian birds. Songs of other species are much shorter and of lower pitch.

The family, comprising 75 species, apparently originated in the American tropics and spread north to Canada. The northernmost species, winter wren, extends into Eurasia.

Winter wrens inhabit boreal and transitional conifer forests across Canada. House wrens (Troglodytes aedon), native to more southern, broad-leaved woodland and scrub habitats, penetrate only a short distance north of the US border, except near the Rockies, where they reach 58° north latitude at Fort Nelson, BC.

The marsh wren (Cistothorus palustris) is found in cattail marshes transcontinentally, reaching its northern limit at Lake Athabasca. Sedge wrens (C. platensis) occupy wet sedge meadows. They occur only very locally in eastern North America. In Canada, they are common only in Manitoba but occur locally in Alberta. All are migratory, except in southern, coastal BC.

Initially, males build several nests, only one of which is used. This occurs especially with marsh and sedge wrens. Clutches average 5-6 eggs (range 4-8).