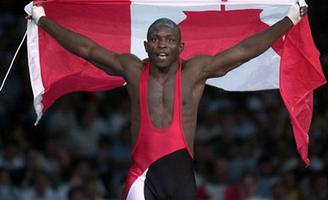 Freestyle wrestler Daniel Igali at the Sydney Olympics in 2000. He won a gold medal victory over Russian Arsen Gitinov in the 69 kg wrestling competition. Igali won the hearts of Canadians when he wore the Canadian flag as a cape, then placed it carefully on the mat and knelt to kiss it (photo by J. Pat Carter, courtesy CP Archives). 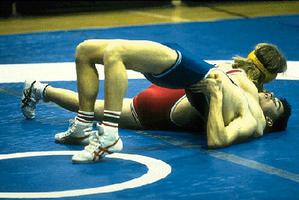 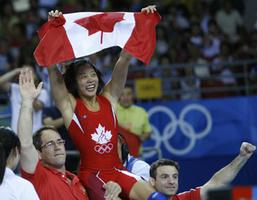 The daughter of Vietnamese refugees, Carol Huynh won the hearts of Canadians when she captured the first medal of the 2008 Beijing Olympics, a gold in wrestling (courtesy CP Archives).
PreviousNext

Wrestling is an ancient sport whose precise origins are impossible to trace. It is an activity of strength, speed, and the scientific application of both. The sport of wrestling is now generally called "amateur wrestling" to distinguish it from professional wrestling.

Humans wrestled first for survival and eventually for sport; in fact, drawings on cave walls portray a form of freestyle wrestling. Wall paintings in Egyptian tombs from about 2000 BC depict matches that show moves very similar to those practised today. Homer's Iliad describes a wrestling match between Odysseus and Ajax at burial festivities during the Trojan War (c 1200 BC), and records show that wrestling was one of the original Olympic sports.

In early times there seem to have been as many styles or forms of wrestling as there were villages or towns. Modern competition has brought with it standardized rules and forms. Although many folk styles are still practised, the world governing body, FILA (Fédération Internationale des Luttes Associées), recognizes the following world-championship styles: Greco-Roman, with holds above the waist only; freestyle, which allows the wrestlers to use any part of their body in executing their techniques; women's freestyle; grappling, a non-striking hybrid with combines wrestling, jiu jitsu, and other submission fighting styles; combat grappling; pankration, a "world heritage martial art" in which no strikes to the head are allowed; amateur mixed martial arts (MMA), which incorporates techniques from most martial arts; and beach wrestling. All styles except Greco-Roman are open to both men and women. However, only three styles--Greco-Roman, men's freestyle, and women's freestyle--are considered Olympic sports. The format, duration, and scoring of a match depend on the style of wrestling and the age of the competitors.

Canadian competition is governed by Wrestling Canada Lutte, formerly the Canadian Amateur Wrestling Association (CAWA) which was founded in 1969.

Since the first Canadian amateur wrestling championships were held at Toronto's Argonaut Rowing Club in 1901, the sport has grown considerably in Canada. In 1969 the Canadian Amateur Wrestling Association was formed and amateur wrestling was touted as the fastest-growing sport in the country. Canadian wrestlers regularly place high in this very competitive sport and Canada has achieved an excellent reputation for the quality of its wrestling officials and administrators. Canada has hosted the world wrestling championships twice since the inception of the CAWA, a testament to the high regard in which Canada is held in this sport.

The Canada Cup of International Wrestling was first hosted in the fall of 1980. The event was planned as an alternative to the 1980 Moscow Olympics, which Canada and many other countries boycotted. The Canada Cup is one of North America's longest-running events, and it consistently attracts strong competitors from around the world.

Since freestyle rules are used in Canadian university and high-school competitions, it is not surprising that Canadians have generally distinguished themselves in this form at the international level. Canadians have competed successfully in world championship competition since 1901.

Canadians have performed well at other international competitions, including the Commonwealth Games. In 1930 Canadian wrestlers garnered all seven medals at what were then called the British Empire Games, held that year in Hamilton, Ontario. At the 1994 Commonwealth Games, Canadian wrestlers won nine of the ten events, and placed second in the tenth event. Later Commonwealth gold medal winners included Igali (2002) and Huynh (2010); Huynh also won gold medals at the Pan-American Games in 2007 and 2011.