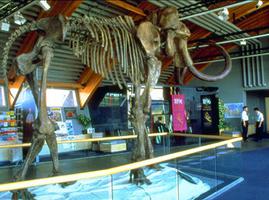 The newly opened (1997) Yukon Beringia Interpretive Centre in Whitehorse, Yukon, takes visitors back some 24 000 years to Beringia, the land bridge that joined Asia and North America during the last, Wisconsinan Ice Age (see Glaciation). The centre includes models, skeletal remains and dioramas of ice-age megafauna, including woolly mammoths, giant beaver and the steppe bison. It also includes information on the people who lived in Beringia and hunted these long-extinct animals. An important feature of the centre is its use of stories and other material gathered from Yukon First Nations of their traditions of Beringia and their long association with the land and its resources.