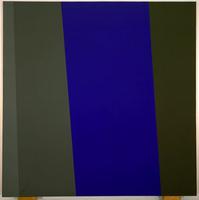 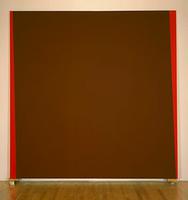 Yves Gaucher, artist (born 3 January 1934 in Montréal, Québec; died 8 September 2000 in Montréal) specialized in printmaking and abstract geometric painting. His work is kept in the collections of the Montréal Museum of Fine Arts, the Art Gallery of Ontario, the Musée d’art contemporain de Montréal and other institutions.

Yves Gaucher studied at the École des Beaux-Arts de Montréal from 1954 to 1956, when he was dismissed from the institution. Despite this setback, the young artist continued his studies with printmaker Albert Dumouchel until 1960. That year, he bought a press, and it was with this press that he made etchings and eventually built an international reputation. In 1962, he received a grant from the Canada Council for the Arts to travel to Europe. In the first half of the 1960s, Gaucher focused on printmaking. The work from this period, limited to a few lines or rectangles on a white background, shows his exploration of the visual reading process and the effects of the visual tension in his abstract, pared-down prints. To achieve more clearly defined reliefs, Gaucher tried various original techniques and sometimes layered papers of two different thicknesses. During a visit to Paris in 1962, he attended a concert by Anton Webern. The experience inspired a set of three prints entitled En hommage à Webern. The grid effect suggested by fine lines and positive and negative reliefs reflects the principles of linear tension, dynamism, symmetry and asymmetry underlying the prints. In many works, Gaucher explored the links between visual art and music even further, focusing on rhythm, structure, variations, and synthesis. As of 1963, several galleries in Montréal, Toronto and New York represented and sponsored him; his first solo exhibit was at the Martha Jackson Gallery in New York. The same year, the Museum of Modern Art acquired En hommage à Webern no2, launching his international career.

In 1964, Gaucher turned from printmaking to painting and to colour as well. As a painter he played with coloured fields, juxtaposing them through the interplay of chromatic energy, symmetry, asymmetry and blank space. In 1966, he participated in the 33rd Venice Bienniale and became assistant professor of fine arts at Montréal’s Sir George Williams University (which became Concordia University in 1974), where he taught graphic arts and painting until 2000. His students included celebrated artists such as Betty Goodwin, Jana Sterbak and Marc Séguin. The same year, he started the series Signals/Silences, which contained what he called “signals”: short horizontal lines that created a symmetrical, ordered composition, allowing him to explore changes in chromatic perception through contrasts and complementary colours.

With Transitions, a series created in 1967, he started to explore lithography. This printing technique produced a flatter colour than his early prints and subtly played with appearances and disappearances, resulting in a dynamic and stimulating effect on the viewer. Some plates from this series were exhibited the following year at the Biennaleinternationale de l’estampe in Paris. In December 1973, Gaucher was elected member of the Royal Canadian Academy of Arts. In the early 1970s, he travelled to Yucatán and extensively documented Pre-Columbian cultures. From then on, his palette became brighter and more colourful. In 1975, he travelled through Egypt, Greece and Morocco to gather visual documentation. In 1978, the Gaucher started working on a set of large-scale paintings entitled Jericho: une allusion à Barnett Newman, in which truncated triangles crossed by a blank vertical stripe create an interplay of diagonals and asymmetries. The triangular and trapezoidal structures in these paintings call to mind certain ancient architectural features of Mexico, Guatemala and Egypt, which Gaucher had long studied in his travels. The asymmetry in the work creates strong tensions.

Through the 1980s and 1990s, Gaucher participated in numerous North American collective exhibits, some of which were dedicated to the great avant-garde artists of the 1960s. Abandoning questions of structure and order, his paintings from the 1980s explore the luminous effects of various colour palettes and tones. In the early 1990s, after several decades devoted to painting, Gaucher returned to printmaking. In 1996, the Galerie Simon Blais and the Montréal Museum of Fine Arts launched retrospective exhibits of his work. After his death in September 2000, retrospective exhibits were organized across the country in honour of his career.

In addition to participating as an artist in many collective exhibitions in major North American museums and galleries — such as the Vancouver Art Gallery, New York’s Marlborough Gallery, the Winnipeg Art Gallery and the Casa Lamm Cultural Centre in Mexico — Gaucher was very involved in the local artistic community. He was a member of the programming advisory committee of the Musée d’art contemporain de Montréal for several years, and he also served for a long time as a panelist on various committees of the Canada Council for the Arts.