Zacharias Kunuk was born in a sod house at his nomadic Inuit family’s winter home in Kapuivik, Northwest Territories (now Nunavut). In 1965, his parents heeded the instructions of government officials and sent Zacharias and his brother to school in Igloolik, where they learned English.

After building a reputation as a successful soapstone carver (his work is in the Canadian Museum of History), Kunuk turned to video in the early 1980s when he bought a small-format camera during a trip to an Inuit art gallery in Montréal. He worked as an independent video maker in Igloolik, documenting hunting methods and other features of Inuit life as an enhancement to oral history.

He also worked in broadcasting, joining the Inuit Broadcasting Corporation’s (IBC) Iglooik station in 1982. He worked his way up to senior producer and station manager before leaving in 1991. He became a staunch critic of the IBC, complaining that too much authority is vested in southern bureaucrats.

In 1988, with New York-born Norman Cohn and monolingual Inuktitut-speaker Pauloosie Qulitalik, Kunuk founded an independent production company called Igloolik Isuma Productions, based in Igloolik. IBC veteran Paul Apak Angilirq joined the group later and died of cancer in December 1998. Igloolik Isuma has produced widely acclaimed videos such as Qaggiq (Gathering Place, 1989) and Saputi (Fish Traps, 1993) — detailed recreations of traditional life using local people of the Igloolik region as actors and shot in a style that melds documentary and fiction. With Igloolik Isuma, Kunuk also made the half-hour, 13-episode series Nunavut (1994–95), produced in a similar docu-fictional style and detailing various aspects of traditional life. These productions are completely in Inuktitut and are set in the 1930s or 1940s.

Kunuk’s preference for making videos about Nunavut’s past rather than its present might be understood as sentimental and nostalgic, but there is a distinctively activist character to his work. His videos are an attempt to intervene in the cultural crisis of the post-war Inuit. They are a means of staving off further collective memory loss by mixing modern technology with traditional, orally transmitted narrative history.

Igloolik Isuma Productions has collaborated with two workshops, Arnait Video Productions/Women’s Video Workshop of Igloolik and Tarriaksuk Video Centre, both of which train local people in basic video production so that they can make media works about their everyday lives.

In 1998, Kunuk began work on Atanarjuat (The Fast Runner), a mystical dramatic thriller based on the ancient Inuit folktale of Atanarjuat. Kunuk recorded eight elders telling the story as it had been passed down to them by their ancestors. These accounts were combined into a single detailed treatment in Inuktitut and English, then adapted into the various drafts of the screenplay by Paul Apak Angilirq. He consulted with community elders and Toronto-based story consultant Anne Frank before passing away in December 1998.

Shot on widescreen digital betacam with traditional props and costumes made by Inuit artisans, the film’s production was plagued by funding and logistical problems, but was completed in 2000. Billed as “the first feature-length fiction film written, acted, produced and directed by Inuit in the Inuktitut language,” Atanarjuat (The Fast Runner) unfolds as a life-threatening struggle of love, jealousy, murder and revenge between powerful rivals and supernatural characters.

The film premiered to universal acclaim at the 2001 Cannes Film Festival and became the first Canadian film to win the coveted Caméra d’or for best first feature film. It went on to receive 19 awards worldwide, including Best Canadian Feature Film at the Toronto International Film Festival (TIFF). Atanarjuat was also an art-house hit, grossing nearly $4 million in Canada and the US to rank as the second highest-grossing Canadian film of 2002. It won five Genie Awards including best feature, best director, best screenplay, best editing and best original score, as well as the Claude Jutra Award (now the Canadian Screen Award for Best First Feature) for Kunuk. Atanarjuat (The Fast Runner) was named one of the top 10 Canadian films of all time in a poll conducted by the Toronto International Film Festival (TIFF) in 2004, and No. 1 overall in 2015. 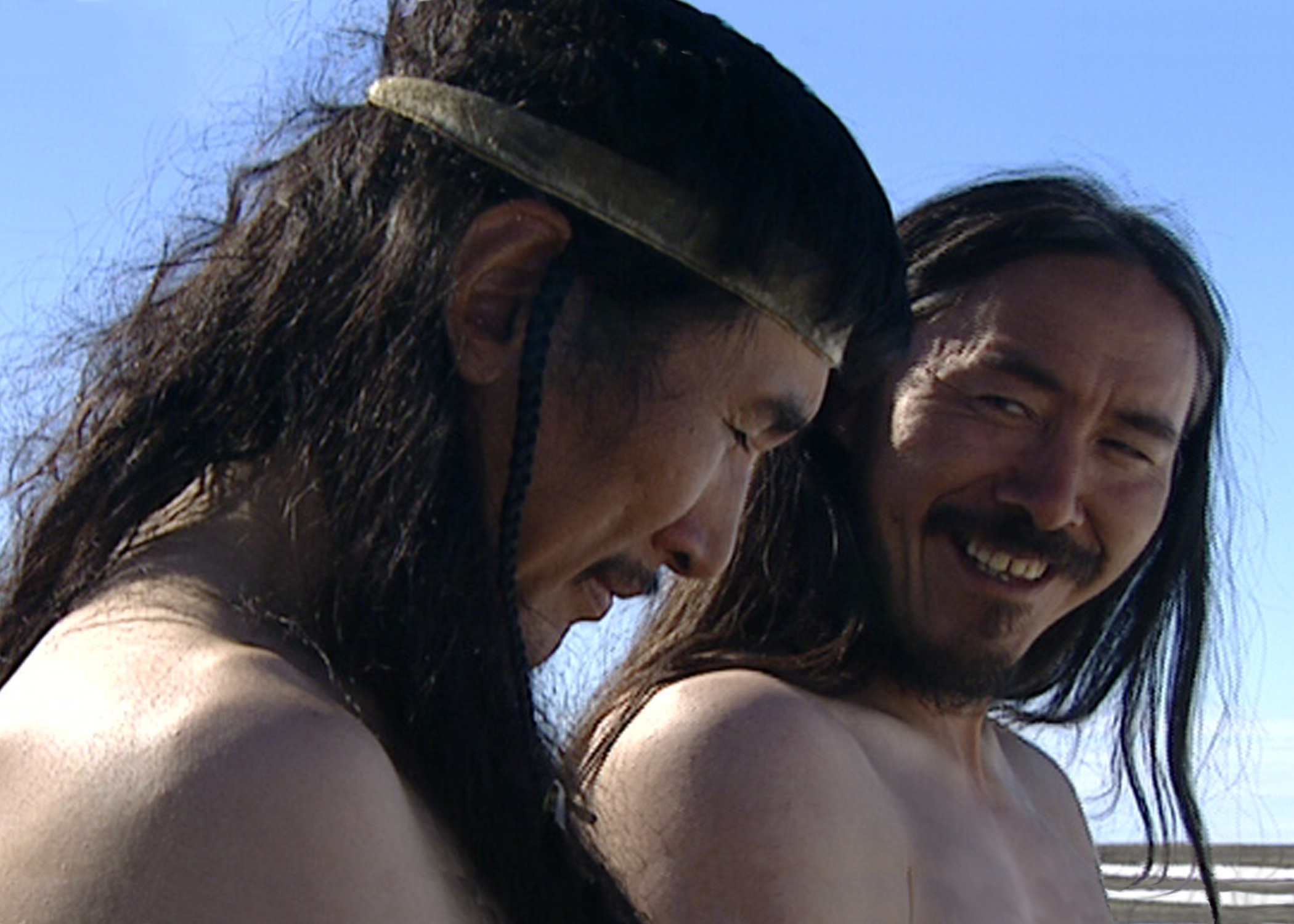 The film was based on the ancient folktale of Atanarjuat. Eight elders told the story as it had been passed down to them by their ancestors. These accounts were combined into a detailed treatment in Inuktitut and English and then adapted into a screenplay.

The Journals of Knud Rasmussen (2006)

Kunuk went on to complete a second feature film, The Journals of Knud Rasmussen (2006), with longtime collaborator Norman Cohn. A Canada-Denmark co-production, The Journals of Knud Rasmussen is set in the Arctic in 1912 during a weather-induced famine. It is purportedly based on actual events described in the journals of the Greenlandic cultural anthropologist Knud Rasmussen. The film is a lament on the beginnings of the devastating effect of European influence on Inuit culture (and shamanism, specifically) just a few decades before government settlements became the dominant way of life.

More ethnographic than narrative in nature, The Journals of Knud Rasmussen proved divisive. It garnered some acclaim and several awards on the international film festival circuit after its world premiere as the opening night film at TIFF in 2006, but its slow pace and lack of narrative focus also alienated some viewers.

Also, in 2008, Igloolik Isuma Productions completed a third feature, Before Tomorrow, directed by Marie-Hélène Cousineau and Madeline Ivalu, with Cohn and Kunuk as executive producers. Ranked by many critics as one of the best films of the year, Before Tomorrow was named Best Canadian Feature Film at TIFF, won best film prizes at the American Indian Film Festival and the ImagineNative Film and Media Arts Festival, and received nine Genie Award nominations, including one for Best Motion Picture.

In January 2011, Norman Cohn stated publicly that Igloolik Isuma Productions had “ceased operations and let go of its employees due to financial insolvency.” The company then went into receivership in July after it was unable to pay roughly $1.7 million in debts. “It’s hard being independent, living on grants,” Kunuk told CBC News at the time. “It's hard, and I'm amazed that we did it for 20 years.”

Kunuk and Cohn shifted their focus to their online television company, Isuma.tv, which was not affected by the bankruptcy. They also continued to produce films through Kingulliit Productions, a company they founded in Igloolik in 2010.

Maliglutit (Searchers), an adaptation of John Ford’s iconic western The Searchers (1956) and Kunuk’s first feature film in 10 years, is a revenge tale about a man pursuing the men who kidnapped his wife and daughter and destroyed his home. Directed by Kunuk and the Inuit actor, director and sculptor Natar Ungalaaq, Maliglutit (Searchers) uses the austerely beautiful landscape of the Arctic as something akin to a character in the film, in much the same way that Ford used the epic, high desert setting of Utah’s Monument Valley in The Searchers. Kunuk and Ungalaaq’s film also offers a critique of the colonial assumptions behind the American Western genre, specifically in their representation of Indigenous peoples.

The film was very well-reviewed following its premiere at TIFF in 2016. NOW magazine’s Norman Wilner wrote, “The material is culturally relevant and the mirror-image storytelling ingenious. But this would be little more than a thought experiment if the filmmaking weren’t so immediate and compelling.” Maliglutit (Searchers) earned Kunuk Canadian Screen Award nominations for Original Screenplay and Best Motion Picture.

Kunuk has shot dozens of videos, ranging from relatively straightforward interviews with community elders to cellphone movies documenting Inuit traditions still practiced in contemporary Igloolik. He has worked tirelessly to ensure that the multimedia reception and production equipment used by Inuit video artists and the general public remain up-to-date and that media companies within the Igloolik region remain among the most video-literate in the Western world.

Kunuk’s leadership in developing and encouraging the Inuit’s unique storytelling style was cited upon his induction as an Officer in the Order of Canada in 2002. In 2017, he received the Toronto Film Critics Association’s Technicolor Clyde Gilmour Award, which recognizes “a Canadian industry figure who has made a substantial and outstanding contribution to the advancement and/or history of Canadian cinema.” The prize required him to choose an emerging filmmaker to receive $50,000 in post-production goods and services from Technicolor, and he selected Inuk filmmaker and visual artist Isabella Weetaluktuk.