Oshawa, ON, incorporated as a city in 1924, population 159,458 (2016 census), 149,607 (2011 census). The city of Oshawa is located 52 km east of Toronto on Lake Ontario. Originally called Skae's Corners, its present name is an Ojibwa term meaning “that point at the crossing of the stream where the canoe was exchanged for the trail.” In 1974, Oshawa became part of the newly formed Regional Municipality of Durham. 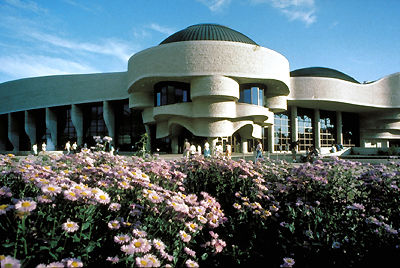 Sydney, NS, Urban Community. Sydney is located near the eastern extremity of CAPE BRETON ISLAND. It is the centre of the second-largest urban complex in Nova Scotia, CAPE BRETON REGIONAL MUNICIPALITY (1995).

Moose Jaw, Saskatchewan, incorporated as a city in 1903, population 32,724 (2016 census), 32,546 (2011 census). The city of Moose Jaw is located 160 km north of the US border and 65 km west of Regina in a sheltered valley at the confluence of the Moose Jaw River and Thunder Creek. It is governed by a mayor and six councillors who are elected to represent the city as a whole. The city’s evocative name is likely based on Indigenous sources and was perhaps first applied to a local creek that supposedly resembled the outline of a moose’s jawbone; another explanation is that it comes from a Cree word for “warm breezes.”

Niagara Falls, Ontario, incorporated as a city in 1904, population 88,071 (2016 c), 82,997 (2011 c). The City of Niagara Falls possesses a fame and name that are based on the stunning, world-famous Niagara Falls on the Niagara River. Growth has combined tourism and gambling with railhead developments at this Canadian–US border crossing. In the past the manufacturing industry (including electrochemicals and abrasives) dominated, fuelled by cheap and readily available hydroelectric power.

Whitehorse, Yukon, incorporated as a city in 1950, population 25,085 (2016 c), 23,276 (2011 c). The City of Whitehorse, the capital of Yukon, is located about 87 km north of the British Columbia border. Communities like Whitehorse, which fall along the Alaska Highway, are often identified by where they sit on this stretch of road. With Dawson Creek, British Columbia at 0 km, Whitehorse is at kilometre 1,476. The city lies mainly on the western side of the Yukon River on a 600 m wide river plain backed by a steep escarpment with a plateau-like summit 60 m above. The Whitehorse landscape is dominated by Canyon Mountain (locally known as Grey Mountain) to the east, Haeckel Hill to the northwest and Golden Horn Mountain to the south. Nestled in a protected valley, Whitehorse enjoys a moderate climate for the North, with warm, dry summers. Long hours of summer daylight (almost 20 hours in June) offset a short growing season and dark winters.