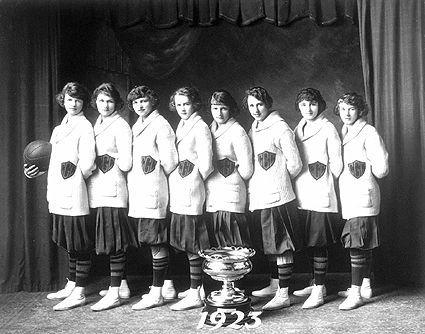 Despite early successes, women have had to fight to be involved in sports, and to be recognized for their athletic achievement. While female participation in sports has boomed over the last three decades, many girls and women still face barriers and discrimination in the sports world.

Sometimes the past is interesting, not because of its long-term historical significance or because it might teach us some questionable lesson about the present, but simply because it contains wondrous reminders of the serendipity of fate. I am fascinated by a goal that Bill Barilko scored on 21 April 1951, not because it was a precursor to Paul Henderson's life-saving marker in 1972, or to Sidney Crosby's goal of redemption at the 2010 Olympics, but because I was there.

Ice skating probably originated in Scandinavia over 2000 years ago as a means of transportation.

The Edmonton Oilers are a hockey team in the National Hockey League (NHL) and are based in Edmonton, Alberta. The Oilers have won five Stanley Cup championships.

There is no icon in Canadian business more universally revered than Tim Hortons. For millions in this country, "Tim's" long ago transcended the world of doughnuts and a decent cup of coffee. It is now a part of the national identity - one of those rare brands by which people identify themselves.

Why Canada’s blazing start at this Olympics is happening in the newer, daredevil winter sports

Heart of the matter

Heart of the matter

For some Olympians, like Dara Howell and Charles Hamelin, sport is a family vocation

Our men and women’s stirring victories revealed the value of planning, patience and sheer unbridled talent. This is Canada on a gold-medal tear.

How an astounding finish transformed the world’s perceptions of women’s hockey, lifting it from second-tier status to a phenomenon that will forever enrich Canada’s rich sports mythology.

Brad Jacobs’s rink struggled in Sochi’s early going, but gold was always the plan—the only plan.