Denys Arcand began as a documentary filmmaker and later moved to fiction. His films are among the most highly praised by all Canadian filmmakers (photo by Daniel Dutka). 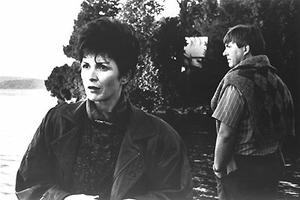 Denys Arcand, filmmaker (b at Deschambault, Qué 25 June 1941). One of Québec's most politically aware filmmakers, Denys Arcand worked for PARTI PRIS before studying history at Université de Montréal, where he co-directed Seul ou avec d'autres (1962) with Denis HÉROUX and Stéphane Venne. He joined the NFB in 1963, where his feature-length documentary on the textile industry, On est au coton (1970), was so controversial it was suppressed for 6 years.

He made another fine documentary, Québec: Duplessis et après ... (1971), before leaving the NFB for the private sector. La Maudite Galette (1972), Réjeanne Padovani (1973) and Gina (1974) were distinctive views of Québec society, original and provocative. All 3 used the gangster film as a source while distorting many of its conventions. He then moved to TV, scripting the "Duplessis" series for Radio-Canada and directing 3 episodes of "Empire Inc." He returned to the NFB to make a documentary on the 1980 referendum, Le Confort et l'indifférence (1982), which revealed growing cynicism about the political process. It won the Québec Critics Prize.

He returned to commercial filmmaking after a hiatus of 10 years with Le Crime d'Ovide Plouffe (1984), before achieving major success with the scathing comedy about sexual mores, Le déclin de l'empire américain (THE DECLINE OF THE AMERICAN EMPIRE) (1986), a film that won numerous prizes, including the prestigious Critic's Prize at the Cannes Film Festival. The New York Film Critics voted it Best Foreign Film in 1986 and it won Best Picture, Best Director and Best Original Screenplay at the 1987 Genies. It was also nominated as Best Foreign Film by the Academy of Motion Picture Arts and Science.

Jésus de Montréal (1989) confirmed Arcand's international reputation, winning the Jury prize at the Cannes Film Festival. It won 10 Genies, including Best Picture and Director, and was nominated in the Best Foreign Film category by the Academy.

Arcand then moved into English-language production in an attempt to break into a larger international market. Love and Human Remains (1993), his first feature in English, was followed by Stardom (2000), a film that looked at the world of fashion. Neither achieved the subtlety and texture of his earlier work.

The overwhelming success of Les invasions barbares (2003), which marked both a return to the French language and to the characters who had peopled Le déclin de l'empire américain, showed that Arcand had lost none of his powers of observation. The film won two awards at the Cannes Film Festival (best screenplay, and best actor for Marie-Josée Croze), Best Canadian Feature Film at the Toronto International Film Festival and the prestigious Oscar for Best Foreign Film.

In 2005 Arcand was named Companion of the ORDER OF CANADA, which recognizes individuals for exceptional achievements of national or international significance.