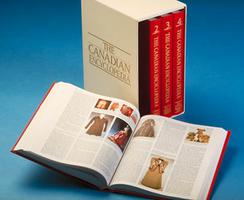 Encyclopedia, a written work containing numerous entries, usually in alphabetical arrangement, attempting to cover all branches of knowledge or all aspects of one subject. The late Latin word is a misconstruction based on the Greek expression for "complete education." Various efforts were made in ancient times to encompass all knowledge in a single work. The first modern encyclopedia, with broad coverage and elaborate cross-referencing, was the Cyclopaedia (London, 1728) edited by Ephraim Chambers. With Denis Diderot's Encyclopédie (Paris, vol 1, 1751) the encyclopedia reached its apogee of literary excellence and social influence. The greatest English-language encyclopedia, Encyclopaedia Britannica, was first issued in 1768 in 3 volumes, and by the scholarly 11th edition of 1910-11 it had grown to 29 volumes.

The first attempt to produce an encyclopedic work entirely on Canada was Canada: An Encyclopaedia of the Country (6 vols, Toronto, 1898-1900), edited by J. Castell HOPKINS. More comprehensive was The Encyclopedia of Canada (6 vols, Toronto, 1935-37), edited by W.S. WALLACE, which was arranged alphabetically and included numerous biographies and descriptions of places. A supplementary volume on Newfoundland, compiled by Robert Blackburn, was published in 1949. The encyclopedia was sold to the Grolier Society, an American publisher, and provided the core of Encyclopedia Canadiana (10 vols, Toronto, 1957), edited by John ROBBINS. The Canadian Encyclopedia (3 vols, Edmonton, 1985; rev ed 1988) was an entirely new work notable for its large number of contributors and consultants (over 3000). Hurtig Publishers also produced The Junior Encyclopedia of Canada (1989) for younger readers. James Marsh was editor in chief for both these works.

Attempts have been made to compile encyclopedic works on aspects of Canada. Sir Arthur DOUGHTY and L.J. BURPEE compiled the Index and Dictionary of Canadian History (1911) as a companion to the Makers of Canada series, and Doughty and Adam SHORTT edited the 23-volume Canada and Its Provinces (1913-17). The Oxford Companion to Canadian History and Literature, by Norah Story, was published in 1967, and a supplement edited by William Toye appeared in 1970. A new Oxford Companion to Canadian Literature, edited by Toye, was published in 1983. The comprehensive ENCYCLOPEDIA OF MUSIC IN CANADA was published in 1981 (rev ed 1992).

Computer technology has completely transformed the way in which encyclopedias are published and has given new life to the form. Grolier, Compton's, Brittanica, Larousse, Encarta (formerly Funk and Wagnalls) and many others are now available on CD-ROM or online. The search mechanisms on these electronic versions provide almost instant access to their huge storehouses of information.