McClung advanced the feminist cause in her day and recognized the need for the economic independence of women (courtesy Library and Archives Canada/PA-30212). 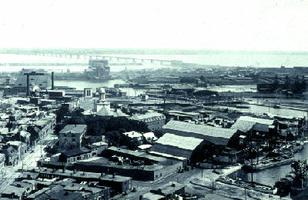 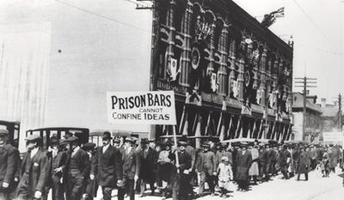 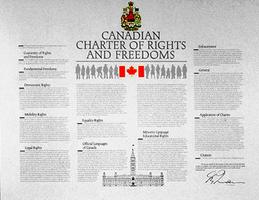 Copy of the Canadian Charter of Rights and Freedoms (courtesy Dept of Secretary of State, Canada).
PreviousNext

Social justice has a long history in Canada dating back to the nineteenth century. Often tied to the idea of creating a more equitable society, and therefore a "socially just society," many of contemporary Canada's social justice groups and institutions originated with Canada's entry into the industrial world.

With the arrival of INDUSTRIALIZATION over the course of the nineteenth century, early attempts to aid the poor were linked with ideas of moral and social reform and were intertwined with religion. In the emerging urban areas in Canada, Christian social action merged with new ideas around urban order and focused on promoting personal "discipline" to cure the social ills of the city. Many of these early reformers unfairly directed their attention to women, such as Women's Home and Sisters of the Good Sheppard, operating in cities such as Halifax. Early reformers believed they could solve most social problems by making women conform to Victorian values, thereby regulating their sexual behaviour. Temperance movements also made significant headway in Canada by arguing that alcohol use was linked to social decay. Some women's organizations were national in their scope and combined temperance with other issues like prostitution and delinquency. The WOMAN'S CHRISTIAN TEMPERANCE UNION (WCTU) was one such organization; it sought a higher public profile for women involved in social reform. Modern day liquor boards owe their creation to the TEMPERANCE MOVEMENTS of the nineteenth and early twentieth centuries.

By the 1880s other groups emerged throughout Canada that began to connect religion to aiding and reforming the inequitable society that industrial capitalism produced. One such group was the SALVATION ARMY, which combined Christian teachings with poor relief. As "soldiers of Christ," the army was active in many communities, both in spreading its Christian teachings and in combining poor relief with everyday life through events such as community dances and events. With a working class emerging in Canada, an American organization known as the Knights of Labour entered Canada in the 1870s and introduced approximately 20 000 workers into the organization. The Knights were an industrial union that linked economics with social democratic principles and were one of the most significant groups of the period in advocating for a more just society.

On a broader level, the 1880s also marked the rise of the SOCIAL GOSPEL movement in Canada. Blending elements of Darwin and Herbert Spencer with Christianity, people within the movement such as Philips Thompson and J.S. Woodsworth, sought to create a "city of God" on Earth. Such a city would be an evolution of human nature but to create such a place the material world could not be ignored and social injustice and equality needed to be banished. As the movement itself evolved, the religious blended into the secular resulting in what J.S. Woodsworth believed was "practical Christianity." Groups that supported elements of these ideas included the Single Tax Association, the Anti-Poverty Society, the Trades and Labour Congress, the Knights of Labour, the Patrons of Industry and the Toronto Suffrage Association.

As the religious ideas of social reform and social justice blended into the secular, the turn of the century and the First World War gave rise to new socialist groups seeking a more equitable society such as the ONE BIG UNION and INDUSTRIAL WORKERS OF THE WORLD (IWW), and after the Russian Revolution of 1917, some of these groups such as the Social Democratic Party (SDP) and the COMMUNIST PARTY OF CANADA (CPC), viewed revolution as the only way to solve the ills of capitalism, and create a just society. Violent clashes between advocates of social justice and the state occurred throughout the First World War and particularly during the labour revolt from 1917-1919, most famously culminating in the WINNIPEG GENERAL STRIKE. (See alsoSOCIAL DEMOCRACY.)

More moderate social reformers also had much success within the parliamentary system. In the 1920s J.S. Woodsworth worked with other like minded social reformers, forming the Ginger Group, which advocated for social justice policies, such as Old Age Pensions, and achieved them through skilled political bargaining with ruling parties, such as the Liberal Party under Mackenzie King. During the GREAT DEPRESSION social justice issues were front and centre across the country, and groups like the Communist Party of Canada frequently agitated for social services such as unemployment insurance. In 1931-32, prominent academics and professionals such as historian Frank Underhill and Professor F.R. Scott, formed the LEAGUE FOR SOCIAL RECONSTRUCTION. The group was critical of monopoly capitalism and unlike the communists, sought social reform and change through democratic means. The group was also instrumental in the early human rights movement in Canada.

In 1932 Woodsworth, along with members of the League, the Ginger Group and the UNITED FARMERS OF ALBERTA founded the CO-OPERATIVE COMMONWEALTH FEDERATION (CCF). The new political party sought the nationalization of important industries along with the creation of a welfare state. The CCF became a significant political force throughout the country and under the leadership of T.C. DOUGLAS, came to power in Saskatchewan in 1944. The party was gaining in popularity during the Second World War and witnessed some of its social justice policies realized by Mackenzie King's Liberal government, such as the creation of unemployment insurance in 1941, and the right of collective bargaining. In Saskatchewan, the CCF established the first publicly funded Medicare system in the province in 1961. The CCF's influence across the country began to falter during the Cold War as the socialist party was frequently accused of supporting communism. In 1961, the leaders of the CCF and the CLC joined forces to form the New Democratic Party with Douglas as its leader.

During the COLD WAR, advocators of social justice turned their attention to issues of human rights. Events throughout the 1960s and 1970s furthered this trend. The Red Scare of the Cold War, the Gastown riot, police violence in Toronto, the rights of drug addicts, the OCTOBER CRISIS of 1970, rights for prisoners and welfare claimants, the civil and women's rights movement of the 1960s and 1970s as well as the gay rights movement all contributed to the creation of numerous human rights groups in Canada. Among these groups are the British Columbia Civil Liberties Association, Ligue des droits de l'homme, Canadian Civil Liberties Association, and Newfoundland-Labrador Human Rights Association. Many of these groups still exist today. In contemporary Canadian society social justice advocates are active in a number of different state and non-state organizations. Many are also international in their approach in promoting a more equal and socially just Canada and world community.